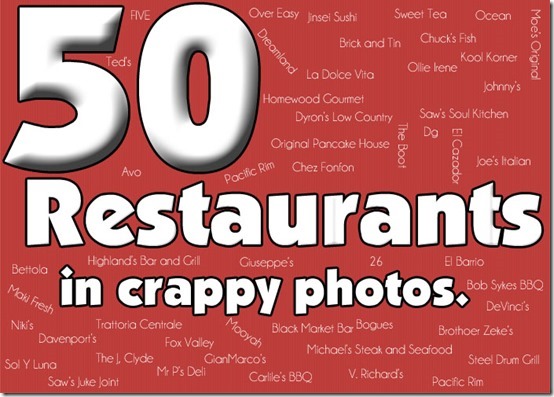 ‘Tis the season for eating out – I declare it. Because who has time to cook?

I’m far too busy addressing envelopes for my Christmas cards that haven’t arrived yet and panicking about their ship date.

So anyway. Let’s move on to food.

The first thing I need to tell you is that Avo is pronounced Ahhhhvo – as in Avocado. I sadly made the mistake of assuming it was Avo with a long A and I can never undo that – it will always be Avo in my mind and I will never ever be able to say Ahhhhhvo without making a seriously strenuous effort.

Avo & Dram are two restaurants in one – Avo is upstairs and quite bright, eloquently designed in hues of blue, and much more formal, where Dram is downstairs and has more of a modern bar feel. However, you can order off of either menu regardless of your floor, so you’re choosing atmosphere only.

I went to Dram for my friend Jamie’s birthday celebration. They started us in the back corner of Avo in a square of opulent couches, then moved us down to Dram once they prepared a table.

The menu was double-sided – Avo on one side, Dram on the back. But the first item on Dram’s menu made me one part uncomfortable, one part thankful that I hadn’t brought Chris along. It would have certainly been a situation of “too soon.”

So I ordered off of Avo’s menu instead.

And it was the right decision. 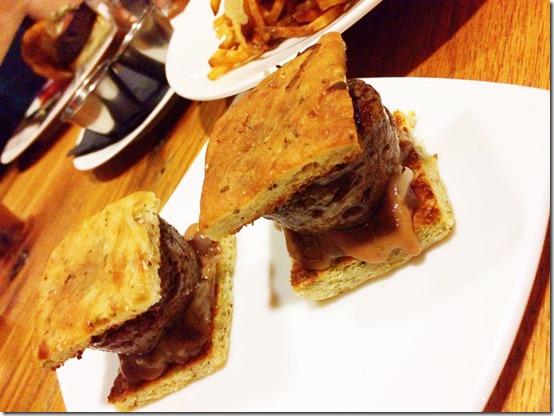 There are not enough adjectives in the world to describe how flavorful, tender, and shockingly juicy these hamburger sliders were.

I am a hamburger connoisseur (and make a pretty awesome one myself), and these were without contest the best I’ve ever eaten.

They were so good, in fact, that one of Jamie’s friends and I had agreed to swap – one of her Country Ham Sliders for one of my Sonoma Sliders – and I totally backed out on her.

She most certainly hates me to this day.

However, we did split a side of Truffle and Parmesan fries, which were also amazing. And I was pretty proud of myself for eating truffles and foie gras for under $20. 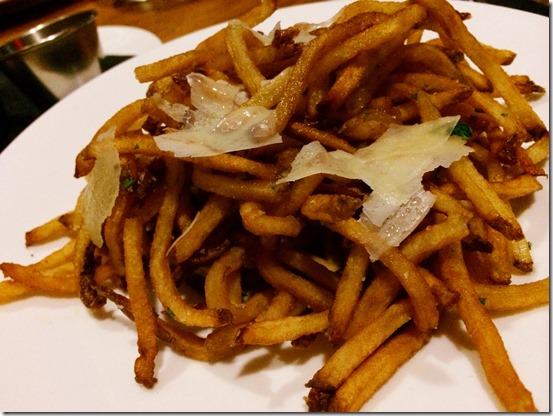 I finished off with cheesecake, an appropriate ending to any meal. 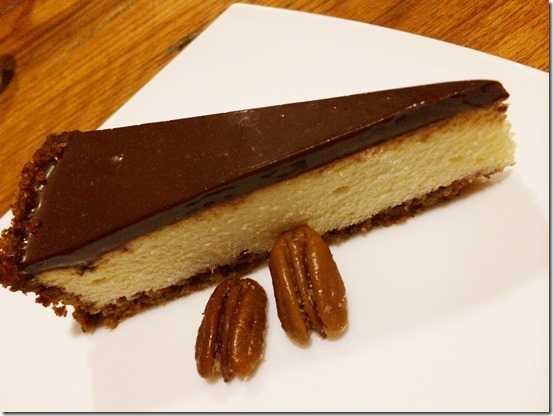 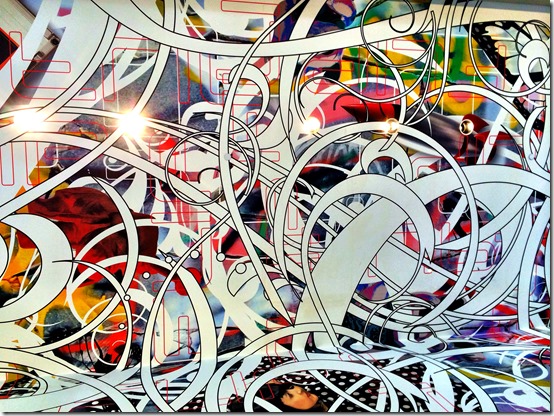 (That’s their ceiling – isn’t it fantastic?)

FLIP is an Atlanta-based restaurant who expanded into Birmingham a few years ago. They technically don’t count as a new restaurant since I have been there once before, but,

a) Our visit took

place right after they first opened, and we all know that’s not a fair indicator,
b) We had serious kid issues that night,
c) We were grumpy because we attempted to go to the restaurant next door (Chuy’s) but there was over an hour wait (and we don’t do waits) so we changed our plan at the last minute, and
d) It was cold and our table was directly in the doorway.

All that to say, we didn’t have a good first experience, and never went back. So when they contacted me about attending a media lunch to sample their Fall Menu, I told them my whole story, and they still wanted me to come.

I immediately forgot everything when they served me their Tomato Bisque Soup. 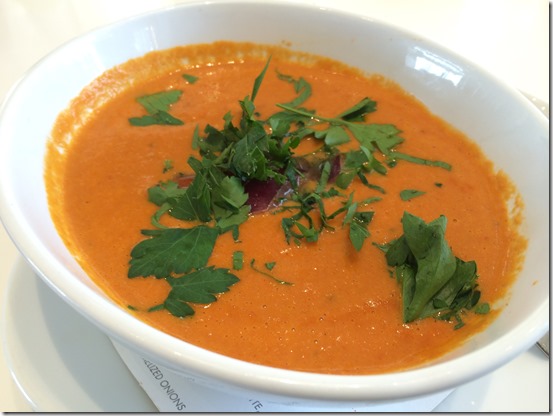 I do not typically like Tomato Soup, but this was spectacular. I wish I could describe it, but it had such a robust and unique mix of flavors, including a delightful red curry, that was unlike anything I’ve ever eaten before. Within a couple weeks, I made Chris take me back because every time I thought about going out, I found myself desiring nothing but that soup.

If they would sell it by the barrel, I’d be their first and most loyal customer.

Back to lunch. I took my friend Ashley along, and she tried the Beet and Goat Cheese Salad, which was also very tasty. 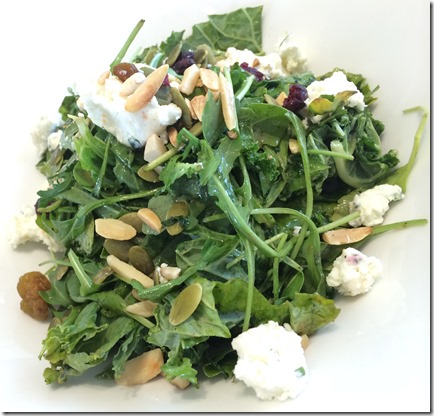 They gave us each a Side Sampler, which was entirely too much food, but offered the opportunity to truly try everything, including their fries, Onion Rings, Sweet Potato Tots, and Brussels Sprouts. 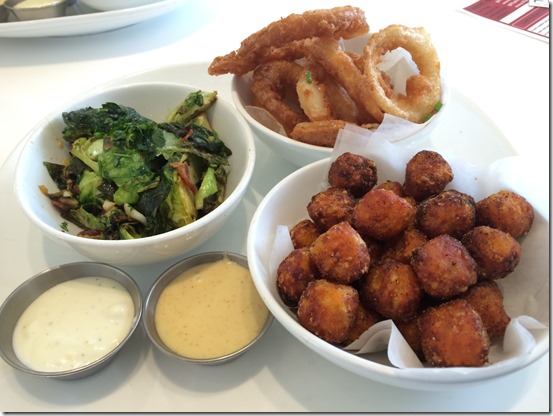 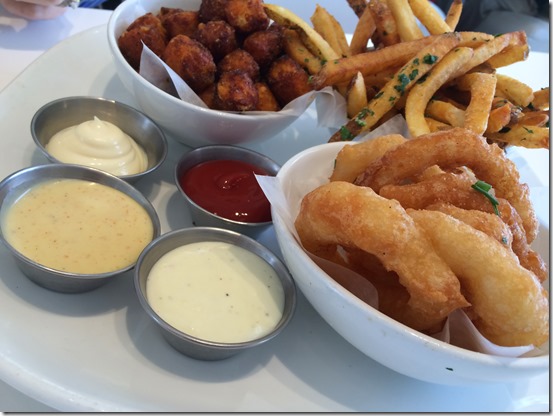 My favorite were the Sweet Potato Tots, which were a perfect mix of crispy on the outside and soft on the inside.

I’m sure you can imagine how very unhungry we were when our burgers arrived, 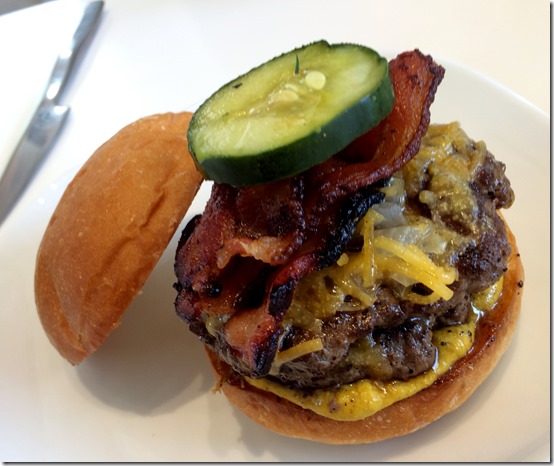 But we highly enjoyed them nonetheless. Because those hamburgers deserved it. 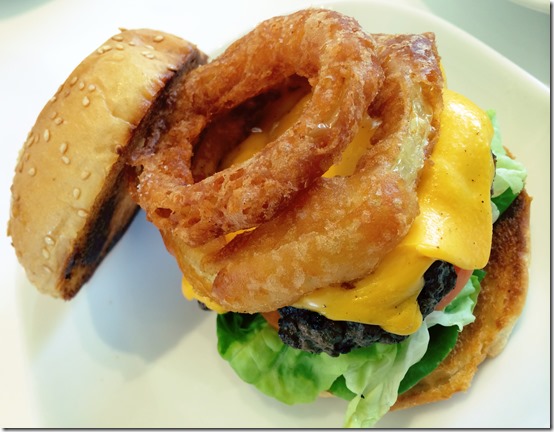 We finished with Fried Apple Pies for dessert, which were a little too salty for my taste, 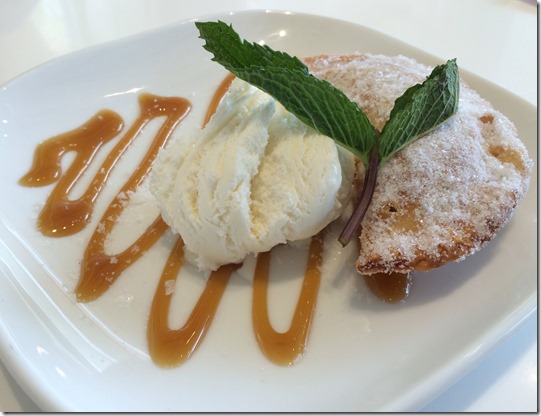 so when Chris and I returned, we ordered the Nutella + Burnt Marshmallow Milkshakes instead, a fantastically decadent choice. 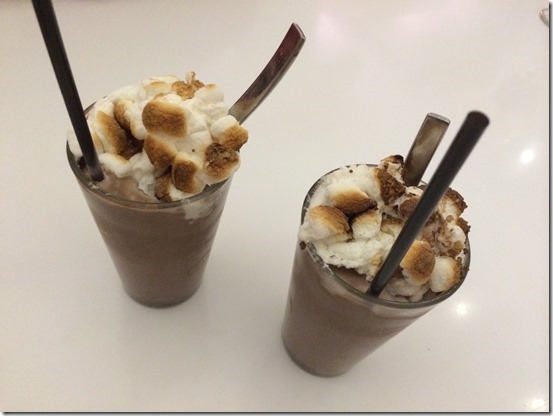 I’m so glad that I had a catalyst to try FLIP again, because I will be living off of that soup this winter.

Epiphany is a Farm-to-Fork restaurant in Tuscaloosa, which is an hour outside of Birmingham and therefore again technically outside of my rules.

Good thing I make the rules.

Chris and I stayed overnight with some friends for the Alabama/LSU game, so they took us to one of their favorite restaurants.

Disclaimer: The lighting was very low. So the pictures are far more crappy than usual, which is quite unfair to the level of cuisine we were served.

Epiphany is very conscientious to procure their ingredients from local farms, and list the source under each menu item. 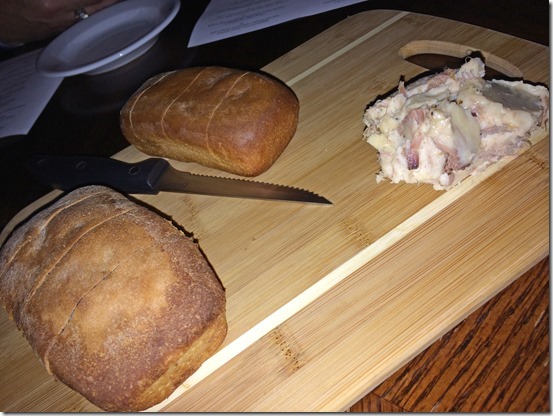 You can imagine how the men at the table felt about pork butter, and you would be underestimating. It was like melting bacon on bread, which was nearly happier for them than beating LSU the next day.

We shared small plates next, including Beef Carpaccio (I do love myself some nearly raw cow), 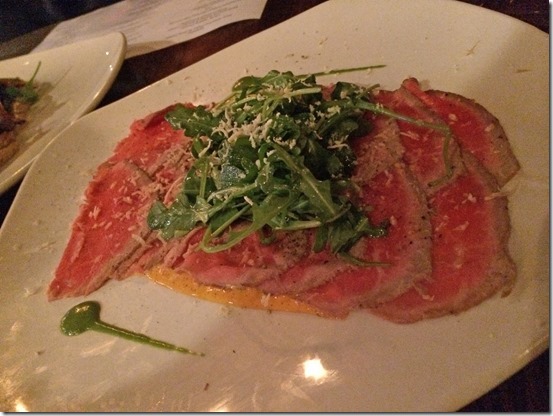 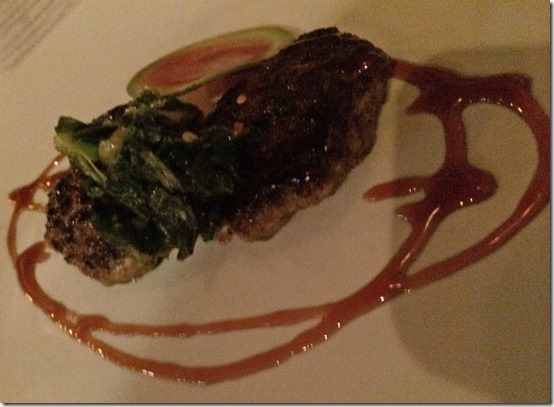 And Roasted Wild Mushrooms over Caramelized Cauliflower and Pork Belly. 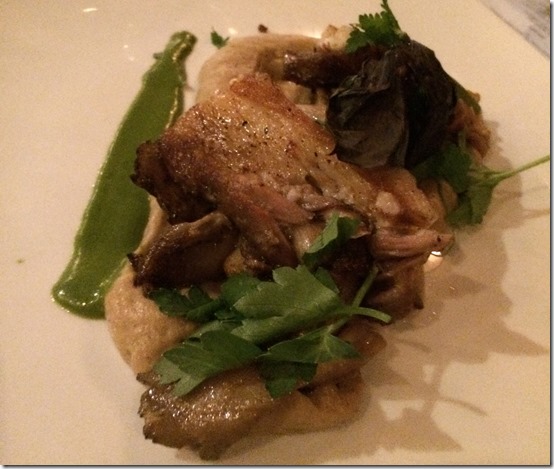 I was most excited about the mushrooms, but the flavor of the caramelized Cauliflower was a bit off-putting, so I didn’t enjoy that one. The Beef Carpaccio was definitely my favorite.

For the main course, I ordered the steak that had been brushed with a fascinating coffee butter (I am now quite the supporter of coffee butter), 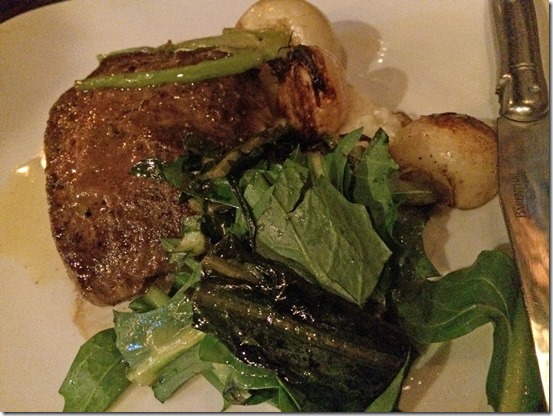 we shared a side of Sweet Potato Confit, 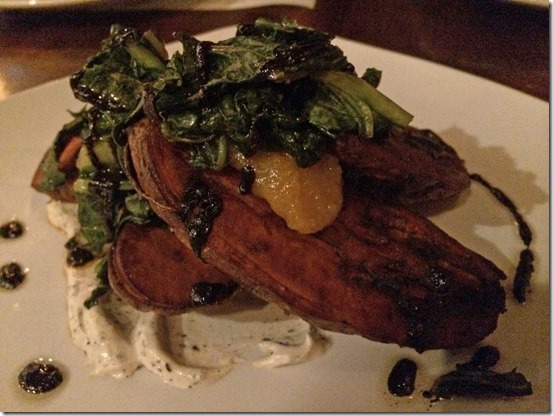 and Chris tried the Short Ribs. 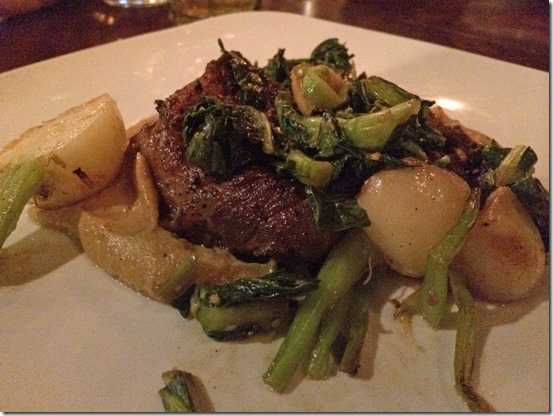 The ribs and steak were tender and very pleasing, and the various local greens served with each dish were fascinating and flavorful.

For dessert, I finished off with the ugliest cake I’ve ever seen. 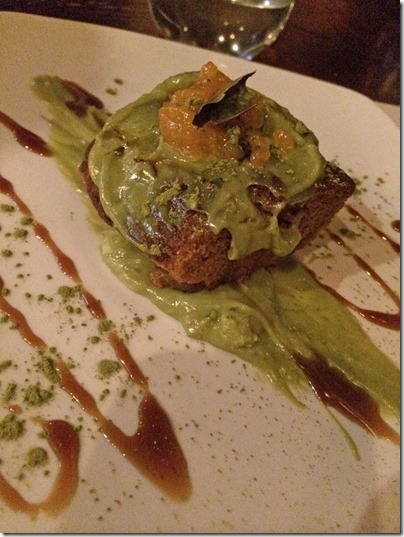 (Okay it was actually nearly pretty in person, but wow it is NOT photogenic.)

It was a Pumpkin Spice Cake with Green Tea icing. And it was stunning. Warm, comforting, and savory, I wiped that green icing clean off of that plate.

And the winner of Round Six is…

I usually pick one restaurant as the winner, but I must divert. Since I’m already breaking the rules, I would rather create my dream Autumn meal pieced together from all three.

I would start with FLIP’s Tomato Bisque soup. Then I would enjoy Dram’s Sonoma Sliders. And I would absolutely end my meal with Epiphany’s Green Tea Pumpkin Spice Cake.

So while I’m endlessly addressing envelopes this week, get out there and eat something fabulous.

6 thoughts on “50 Restaurants in Crappy Photos, Round Six.”