It took Ali six years to work up the courage to actually speak to Santa, so this year, she eagerly prepared for her second visit to The Man, The Mystery, The Legend.

She began early to work on her Christmas list. 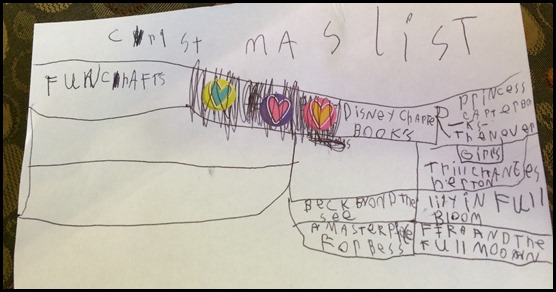 Then she trashed that list and started over. Because one can never revise their own literature too many times. 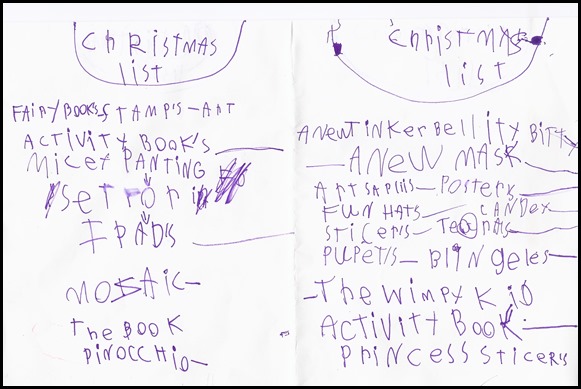 When the time came that we were to attempt our visit (with many reminders to the children that if the line was wrapped around the mall and/or if there were multiple screaming babies and/or if Santa visibly had another child’s puke on his Jolly Red Suit, we’d have to try again another night), Ali realized that Noah didn’t have a list.

So she offered to be his scribe.

At first, all she could get out of him was that he wanted a “tall tall train” – but then she started suggesting things – and after consideration of the items listed, it was clear that she based her suggestions upon looking at the items already in his room. 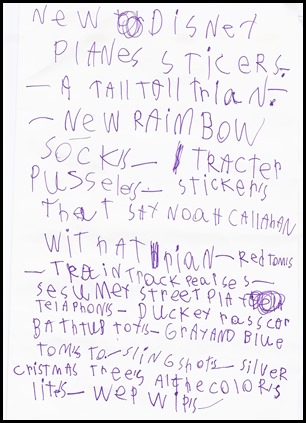 Except for the wep wip’s – according to Ali, that was Noah’s specific request.

(My theory is because I told him that he had to potty-train after he turns three – but it’s a valid assumption that if we had an unusually high supply of wet wipes, surely he would get an extension.)

(His fatal flaw was that he forgot that wet wipes are also my main method of cleaning the house. There’s always a counter to wipe down or a floor to spot clean for every wet wipe left behind.)

We drove to the mall and the Reindeer shined grace upon us – the line only had one turn to it, and no screaming babies.

In fact, we were completely surrounded by families with…adolescents.

I studied the odd gatherings of aged children intently, searching for clues. Maybe they were teenage parents and I just couldn’t see the babies…

Maybe there were significantly younger siblings running around somewhere else?

Just the adolescents and their overly-excited, camera-armed parents.

One of these family units even asked my husband to take a photo of their family – mom, dad, two teenagers – while standing in line.

“It’s part of our tradition,” she explained, as the high schoolers desperately attempted to hide their faces.

Another family, directly in front of us, contained an only child, around the age of 14.

SURELY she’s not going to sit in Santa’s – oh…….nope. There she goes. Up on that lap.

Then it was our turn. Santa looked relieved.

My appropriately aged children eagerly presented him with their lists, which he expertly translated. 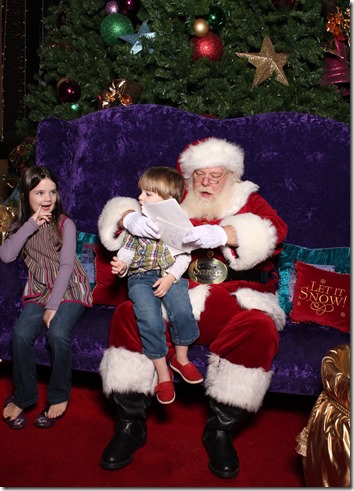 Santa’s not-so-elf, the fussy camera operator, then interrupted their beautiful moment to grumpily instruct them to pose for a few (dozen) photos. 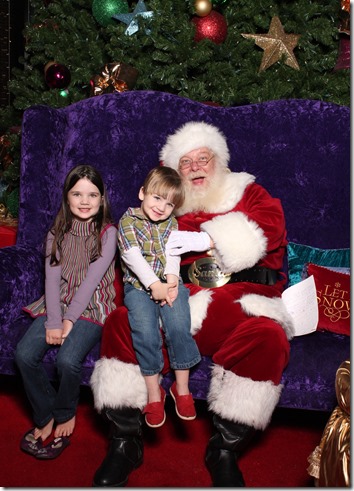 I half expected her to scream “You’ll shoot your eye out!!” then shove my children down a secret slide to Elf Hell if they didn’t obey her “Smile at the freakin’ camera!” barks. 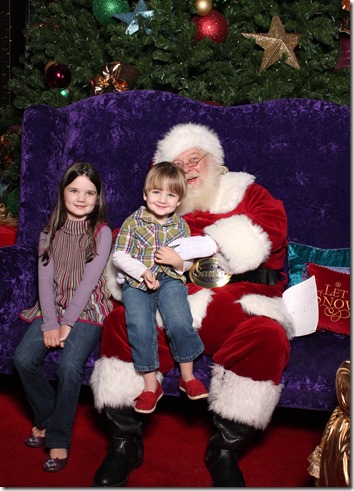 Okay maybe it wasn’t that bad but still. Is visiting Santa about the children having the opportunity to tell Santa what they want or about you selling me a Flash Drive for $49.99? 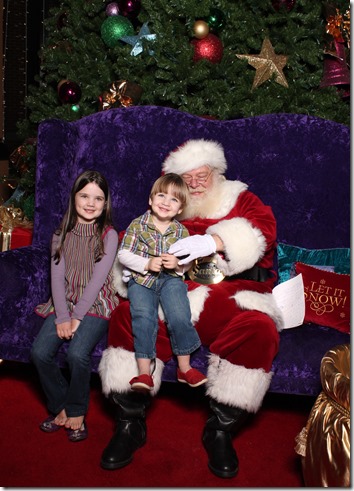 Santa very seriously instructed my kids to be good (which they found confusing, since we don’t tie Santa to good behavior,) then they hopped off to make room for the next pair of reluctant teenagers.

Then Santa realized he still had their lists, and got up to give them to Grumpy Elf. Being a good Santa, he felt the need to assist us in covertly retrieving the lists by calling Ali back up and telling her to be good again, which she puzzled over all night.

Grumpy Elf, however, did not get the memo. And didn’t hand us the lists until Ali had turned around and run back to us.

Did Santa just roll his eyes? Yes, Grumpy Elf just got a demerit.

Luckily for us, Ali assumed Santa had memorized the lists. Or taken a picture with his smart phone.

Then Teenage Boy and Teenage Girl humiliatedly drug their feet over to Santa and nearly smiled as their parents giddily waited for that annual photo op.

I had trouble concentrating on Grumpy Elf Number Two’s spew of the many photo package options because I was entirely entranced with watching the conversation between Santa and teenagers and making up the supposed dialogue that was going down.

Teenage Boy: “TELL me about it. See that table over in the food court? Yeah. That brunette is the girl I wanted to ask to Senior Prom. That is, BEFORE she saw me sitting in your lap.”

Teenage Girl: “And I can’t ever invite friends over because of the Santa’s Lap Photo Montage in the hallway! It’s SO lame.”

Santa: “I know, kids. I know. My sciatic nerve can’t take many more of your sized people, either. Parents these days, huh?”

Grumpy Elf: “QUIT YOUR JABBIN’ AND SMILE AT THE CAMERA, ZIT FACE!”

I get it. Even though this is only Year Two of our Pictures-With-Santa Tradition, it’s cute to see the changes – heck, even Santa looks more rosy this year. 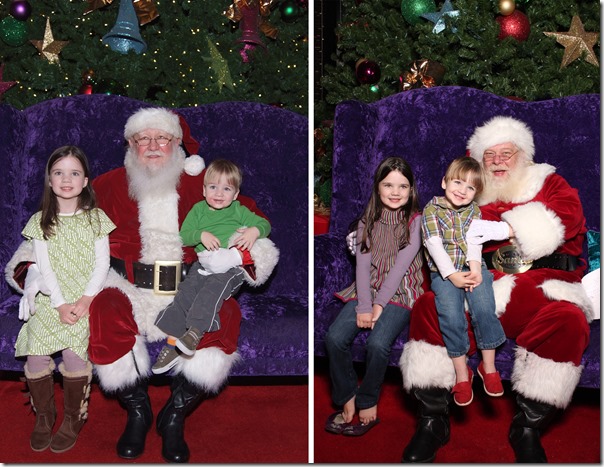 But it becomes significantly less cute when their voice changes.

And they grow chest hair.

C’mon parents. Be better than Teenage Santa Pictures. Do whatever it takes to prevent this tragedy – I am. 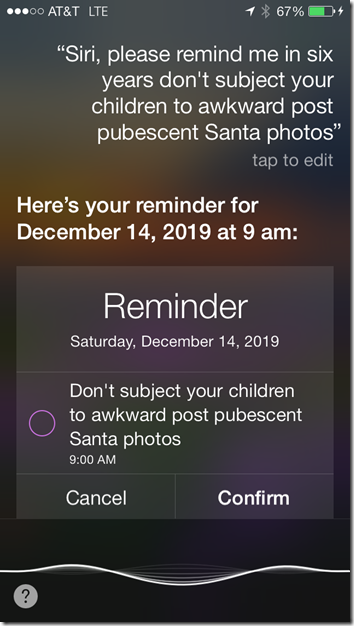 20 thoughts on “When Santa Traditions Need to Go.”