When it comes to internet radio, I’ve always been a Pandora girl. It’s free, easy, and they were the first people (that I know of) to use the fantastically mysterious Music Genome Project to magically choose songs that I would like.

But then my friends kept talking about Spotify. Over and Over and OVER.

So I downloaded the app, couldn’t figure it out, realized I’d have to re-teach it all my likes and dislikes (why don’t they have a “Copy my Pandora Personality” option? Or do they and I’m just too dumb to find it?), and promptly deleted it.

But all I kept hearing was Spotify, Spotify, SPOTIFY!!!

You would think it was the musical equivalent of Doctor Who or something. Geez.

But then I craved some new musical input into my life and asked you on Facebook for your favorite songs. I wanted to put them into a publically available playlist so that you could enjoy it as well, and I knew that the best way to do that was Spotify. So I downloaded it again, and this time I didn’t delete it.

Because the mix of you was fascinating. 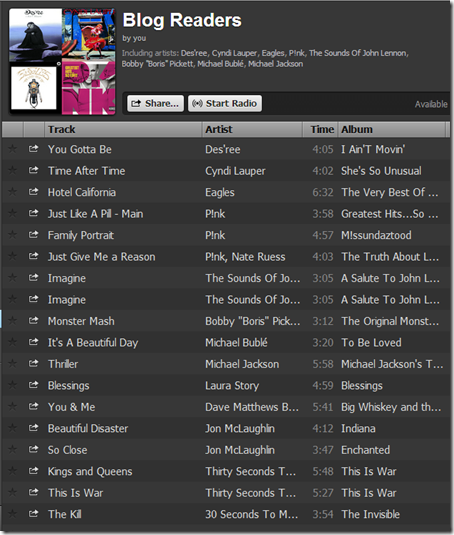 For one, I felt so much more intimate with you, now armed with the powerful knowledge of your favorite song. I remembered who recommended most of the songs, so I could think about (and overanalyze) that particular person as their song played. (Basically, a blogging stalker’s nirvana.) And plus – who knew I had a blog reader with a tattoo portrait of Alice Cooper?

I continued getting suggestions and added some of my own favorites, and so the playlist grew to over 80 songs – with variety as vast as Steven Curtis Chapman to Queen to Sam Cooke, and P!nk and Michael Jackson in between. And obviously, Alice Cooper made an appearance.

But now that I’ve listened to the playlist on repeat for two weeks straight, I’m itching to add more songs.

So. I need your input for my ongoing musical happiness.

1. What are your favorite songs?

2. Much to the chagrin of The Holiday Police, I have rashly created a separate Spotify Playlist for Christmas Songs, despite the pre-Thanksgiving state of the year. What are your favorite Christmas Songs? Preferably with the artist as well, but if not, I’ll make an educated decision for you.

I’ll be updating the lists as your suggestions come in, and if you’d like to listen along to the cornucopia that is all of your tastes, you can tune in (can we still call it tuning in?) to the original playlist or the Christmas playlist from your computer or the Spotify app. I think you can do all of this for free, but what do I know – I’m new to Spotify.

(And I still don’t watch Doctor Who. So there.)