Life has begun in the South. Football Season is here, also known as The Holy Days. I married into University of Alabama Season Tickets, the most scarce and sought after of commodities in the state. Our schedule starts with a couple away games, but soon, our entire family will be digging out our crimson (except Chris, for his are never put away) and driving an hour to celebrate with over 100,000 like-minded southerners. 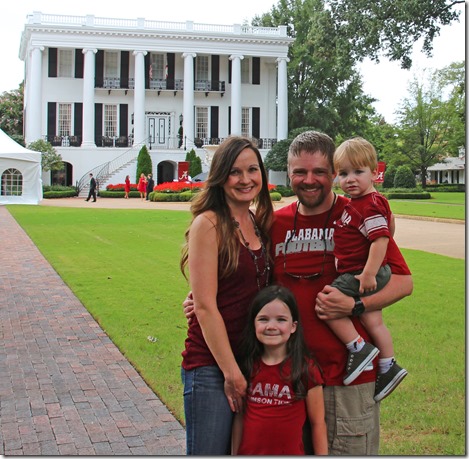 Except not likeminded. Because although I masquerade as best as I can, I am not one of them.

It’s not that I’m a fan for another team, I just…don’t get it.

And I am positive that this fact makes other Alabama fans burn with Righteous Crimson Indignation when they realize how undeserving I am for my seat. Because I am The University of Alabama’s Worst Season Ticket Holder.

1. I fell asleep in the stadium during several games of my first two seasons.

2. I didn’t watch a single play of last year’s National Championship game – I chatted with my friend the entire time while our husbands passionately paced the room and yelled at the television.

3. I have trouble remembering the name of our current quarterback, and often presume that it’s still the two-quarterbacks-back guy.

4. I cannot stomach the term “Bama” and will only wear shirts on gameday that say “Alabama,” although I prefer color coordinating yet non-logoed clothing.

5. I don’t believe in booing. And I cut my husband an evil look anytime he tries to sneak one in.

7. I’m much more interested in Gameday Fashion (and turning it into a sport) than I am the actual game.

8. I get ill when I realize how much younger the players are than me. Then find myself wondering why we’re supposed to care.

9. I don’t know how many National Championships Alabama has won. Then again, anyone could lose count lately.

10. I prefer to watch games on television. After all, they don’t have that nice yellow line in-stadium.

12. I cheer only on extremely special occasions. And I’m pretty sure that’s happened less than ten times in my fourteen seasons.

13. I have considered boycotting until we got a Houndstooth Field, a real elephant for a mascot, or both.

15. As I write this, there’s an away game on. I just heard my husband yell “Touchdown!” from the other room, and I was like, “eh.”

16. The only redeeming quality I see in shakers is to measure how far I can stretch their fronds when bored in the stadium.

So go ahead. It’s okay. Hate me. And Roll Tide.

62 thoughts on “Confessions of a Poser.”