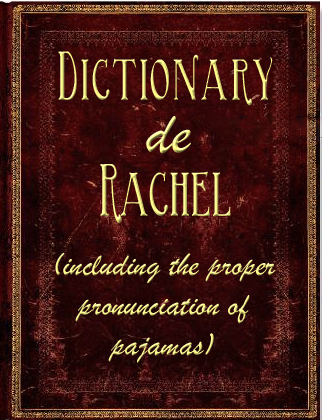 Last Saturday, I tweeted and Facebooked a passing thought about how to pronounce “pajamas”, thinking that most people would agree with me.

And I learned something that day: more people should talk like me.

Okay maybe not. But I did decide that I should at least list out the rest of my speech idiosyncrasies for you all to mock.

Let’s start with the original issue at hand…

Pajamas should rhyme with Alabama, never llama. Unless you’re talking about Obama’s Pajamas, then it would be impossible to not make it rhyme. But then again, who has the right to discuss the president’s nightclothes? But the thing is, saying Pajama in that wrong way does something peculiar to my jaw (an unhinging?) and makes me feel like yawning. Which, I suppose, would be rather convenient…

My defense on this issue was going to be that I preferred the quirky Australian Cartoon Bananas in Pajamas significantly over the obnoxious book Llama Llama Red Pajama, but then I listened to the theme song of Bananas in Pajamas and realized that Australians pronounce pajamas and bananas to rhyme with llama.

It’s a washcloth. Never a washrag. Because who wants to wash with a rag? Then it’d become a filthy rag, and we all know what that is.

(Cloth Vs. Rag is the recurring argument that Chris and I have every time bathe the kids. Which thankfully isn’t that often.)

“Buggy” is the correct way to pronounce “shopping cart.” Because shopping cart is a total waste of breath! That’s like, an entire syllable longer than it needs to be.

It’s y’all, y’all. Not you all. Not you guys. Definitely not your all. Never Yous Guys. Why can’t everyone recognize the superior efficiency of y’all?

(But I might refer to Noah’s every now and then.)

Tump is a word. (Even if it does have a red squiggly line under it when typed.) Tump means “to spill or turn over, usually accidentally and often by a child,” and is an important part of the southern lexicon.

Chester Drawers – My Dad kept his clothes in these when I was a kid. He might have been saying “Chest of Drawers”, but down here that sounds a lot like chester drawers, so I assumed his drawers were made out of chester wood, which I now realize is not actually a thing.

I carry a purse, not a handbag.

My grandmother, however, used the term “pocketbook” and confused me endlessly as a child. I always expected her purse to look like miniature reading material.

It’s a bathroom. Not a washroom, not a restroom, not a powder room, never a water closet, and certainly not a lavatory.

(Because lavatory sounds like there are experiments going on in there. Experiments that I want to know nothing about.)

Crayon has two syllables. Although when I was little, I totally learned that crayon was a homonym with crown. In fact, I assumed for years that those bible verses about getting “Crowns in Heaven” were actually talking about a Crayola Big 64 Box.

(And the 120 Crayon Tower for Billy Graham.)

Syrup should never seer up. It rhymes with stirrups. But don’t think too long about syrup-covered stirrups.

Roof should rhyme with aloof. And so should poof. The Snooki pronunciation of poof is not a sound that exists naturally in the human experience.

Route should rhyme with drought. Not boot. Unless referring to Route 66, the only exception.

I go to the grocery store, not the supermarket, and definitely not the “grocer” (that sounds like grosser.)

Sometimes, I realize the errors of my pronunciation and work hard to fix them. These are words that I’ve consciously adjusted over the years:

Illinois – I used to pronounce the s, but I have since dumped it, after being mocked by an Illinoisian. (Illini? Illinian?)

Anyway – I also used to add an s here – “anyways.” That one took a while to jettison, but I don’t miss it.

Orange – This is the worst word I ever butchered. As a kid, I said “are-eeeenje.” I recall this with humility every time I have to mention that color.

Salmon – I know how to properly pronounce this fish. However, it is impossibly difficult to form the word with my mouth. But I manage to muddle through very carefully.

And finally, there are a few words that I regularly swap up my pronunciation – because what’s life without whimsy?

Either – Some days it’s eether. Others it’s eyether.

Theater – The “a” has multiple variations of long, short, and medium pronunciation.

Caribbean – This word legitimately does have two variations depending on context, right?

Data – I usually go with the long a Data to pay proper homage to ST:TNG, but if I’m feeling especially intelligent, I’ll short my a.

Niche – I hate saying “neesh”, even though I know it’s correct. It sounds so ridiculously 90210. So I say “nitch” anytime I think I can get away with not being mocked.

Your turn – weigh in. Tell me how wrong I am.