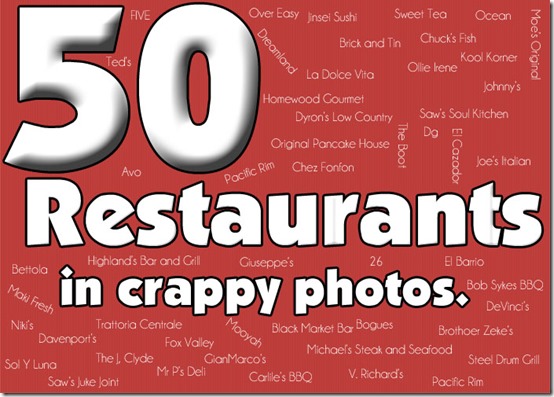 To recap, I’m on a mission to visit fifty restaurants I’ve never been to and report back to you with honest reviews and crappy photos.

11. 26. It would have been much more literary had I waited for restaurant #26 to visit 26, but I’m glad I didn’t. 26 is one of those restaurants that we were immediately regretful that we hadn’t visited earlier in life. We waited so long because we thought it was expensive, but that would be Ocean, it’s sister restaurant. We found 26 to be shockingly reasonable considering it’s local food sourcing and gourmet pairings.

It’s in Southside next door to Mellow Mushroom. Chris and I had to park around the block and down the street, but the walk gave us the opportunity to see some gorgeous Old Birmingham architecture that we’d never been slow enough to notice before. 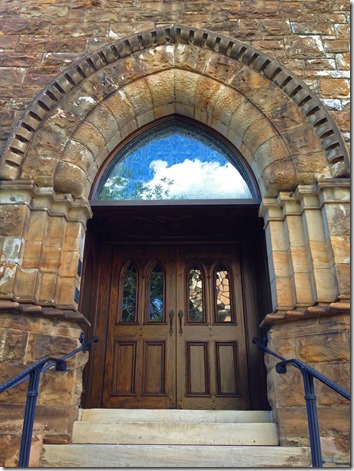 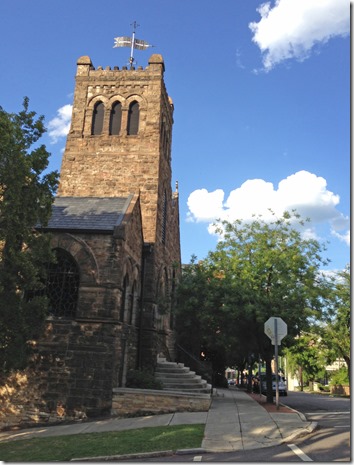 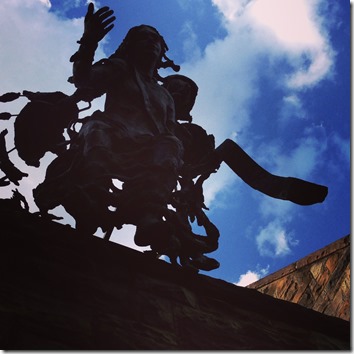 Also, the streets around there were pretty awesome, seemingly sliding from their appointed posts. 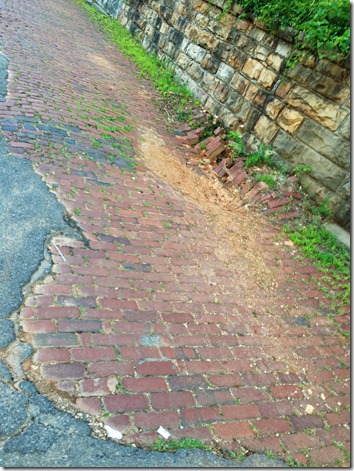 26 has outdoor seating, but the interior is so fantastic that I would feel like I was missing out on part of the experience if I sat outdoors. 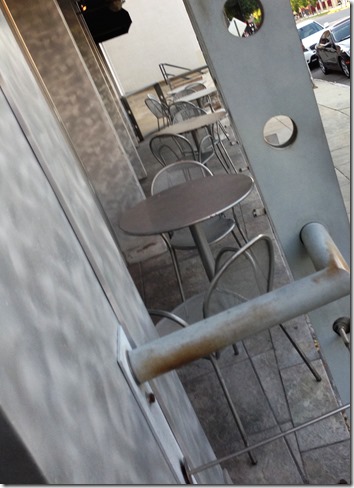 Modern and eloquent, it has the feel of a trendy Atlanta restaurant, something I’ve only experienced in Birmingham at Dodiyos and Hot and Hot Fish Club. 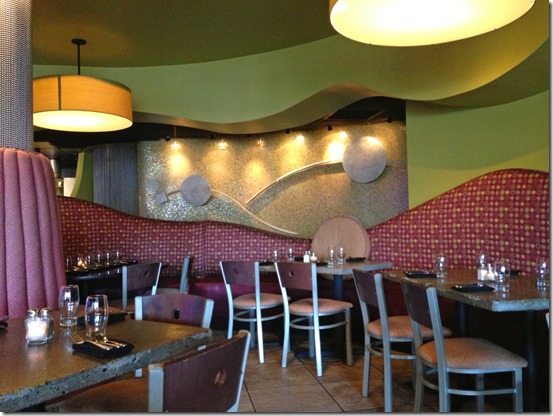 We are not sushi people, but not for lack of interest – simply for lack of opportunity. So we took the opportunity to start our meal off with an attempt to increase our experience points. 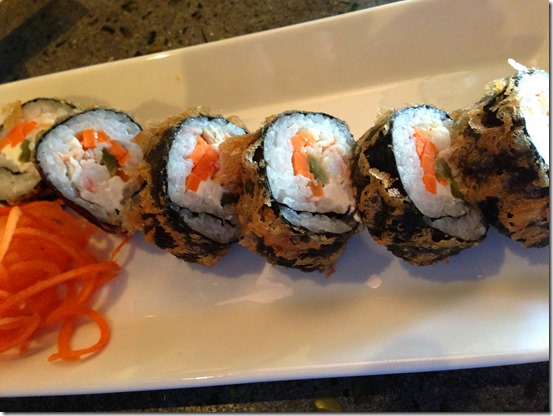 And he ordered me (yes, he ordered FOR ME! Are we in the 1950’s or what?) a smoked salmon roll with Alaskan King Crab, Avocado, Cucumber, and Sambal Aioli, whatever that is. 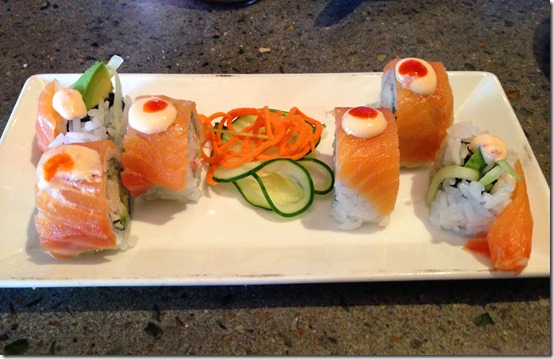 Thanks to my Mom who let me eat raw steak as a kid, I am not squeamish about uncooked (or in this case lightly smoked) things, so I really enjoyed my sushi. I tried Chris’, but liked mine better. He felt the same about his, so clearly he ordered well.

This visit upgraded my Sushi Experience Level to “Interested But Not Addicted.”

I ordered the Grouper with local vegetable succotash over cornbread. I adored the vegetables and cornbread, but the grouper was just okay. 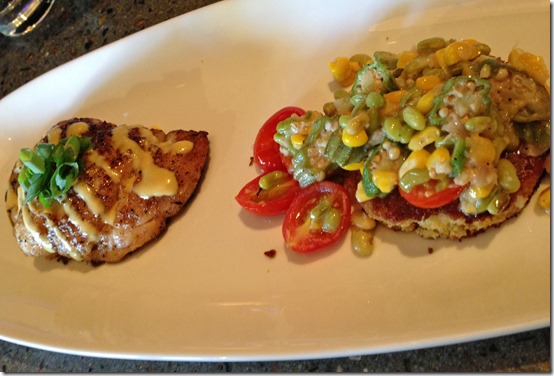 Chris got the Creole Cornbread Crusted Shrimp with smoked gouda cheese grits and Andouille sausage. He was a very happy man. 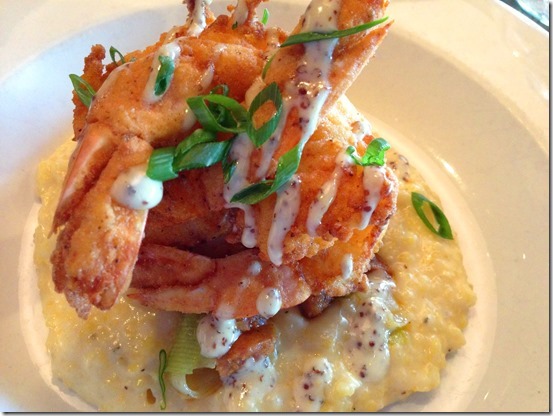 The Truffle-Scented fries with house-made ketchup was too tempting to pass up, so we got them on the side. They reminded us of the fries we had at Anthony Bourdain’s former restaurant, Les Halles, in New York City. 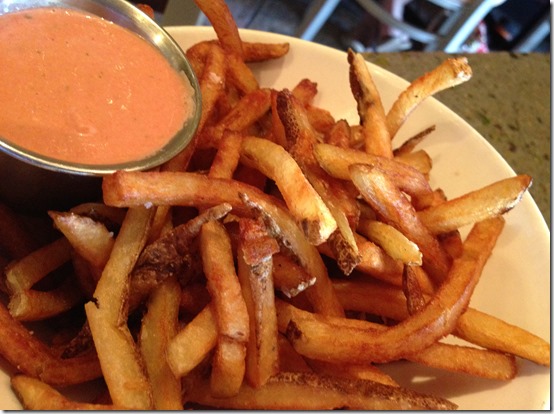 For dessert, we tried Banoffee. I don’t think I need to describe it – just show it. 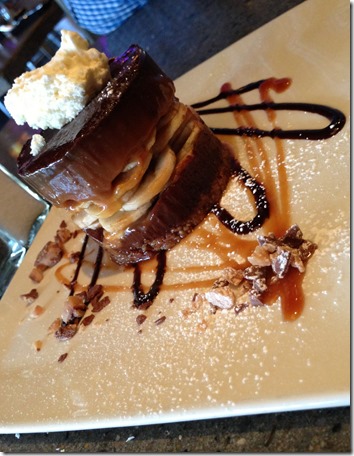 The only disconcerting moment was the intense confusion I experienced when I attempted to go to the bathroom. Three doors, one which was sliding and seemed only semi-private, and zero markings. 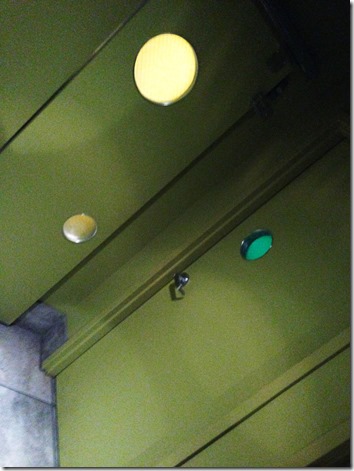 Of course I walked into the guy’s. And I can’t pee with a urinal watching me. 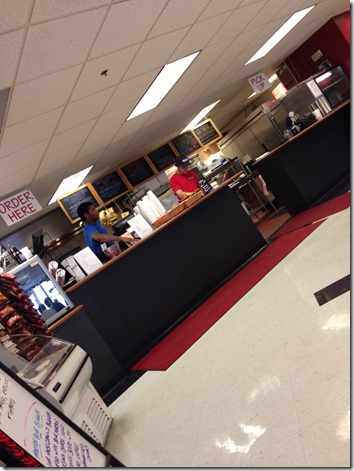 Sol’s Deli is significantly older than me – born in 1968 in downtown Birmingham. So clearly, I have no excuse for having never been there. Also, it’s owned by the same three brothers that own my favorite Birmingham salad destination, Slice.

And? They’re Lebanese. I can barely call myself the expert in all things Birmingham-Mediterranean without having gone here.

I took Noah downtown with me to meet Jamie for lunch. Noah loved it before we ever entered the restaurant because he got to fill the parking meter with money (I let him pay them a bonus of ten cents because he was having so much fun.) 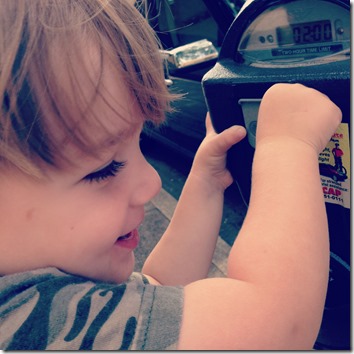 Also, it’s right next to the coolest tunnel in Birmingham. 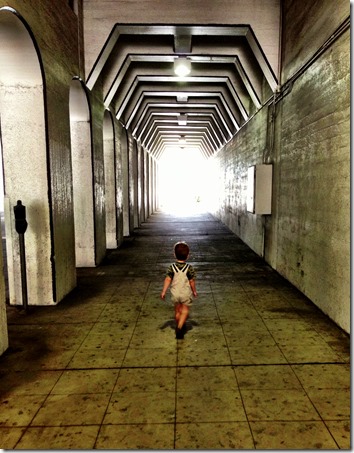 Getting him out of that tunnel and into the deli proved to be my biggest challenge of the day.

But they served him a generous helping of chicken and fries, so that helped revive his tattered soul. 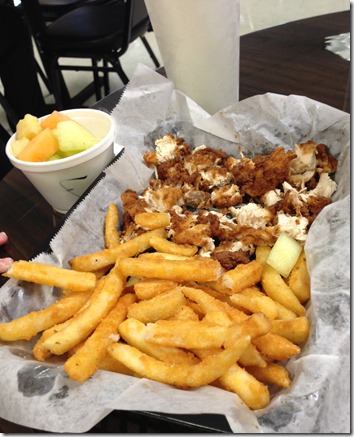 I ordered a turkey wrap with tabbouli and hummus. It was good, but I found myself wanting more hummus to dip it in. 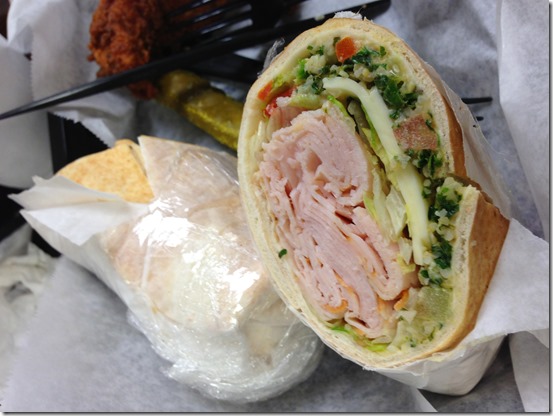 Jamie ordered a fried green tomato BLT and adored it. I will definitely be trying that in the future. 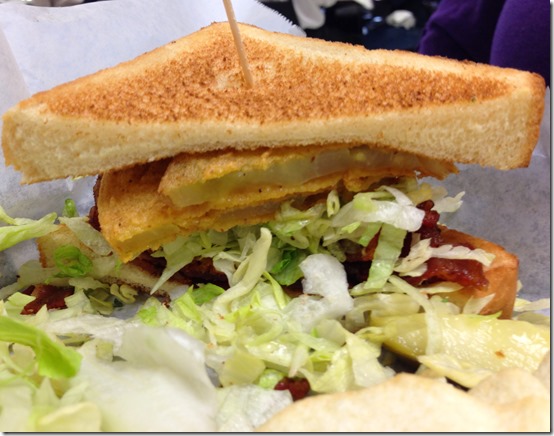 (She got both halves – we just were thinking too much about food and too little about photography.)

Noah keeps begging me to go back to the tunnel restaurant, so it can be notated as kid-approved. 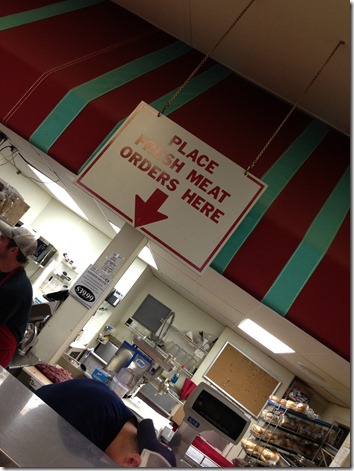 I’m even more embarrassed to admit that I’ve never been to Mr. P’s. It’s right down the road from my church, and has always been the appointed hang-out. Having been a member of said Church for 18 years, I’m pretty sure that this qualifies me for dismemberment.

I went on a Saturday after hiking just down the hill at Red Mountain Park with my friend Amanda, and it was unbelievable.

After figuring out the unusual ordering system and ridiculously extensive menu, I requested the Jennie B, which included a half-pound of chicken and turkey, bacon, mozzarella cheese, and house honey mustard on a very soft whole wheat bun. 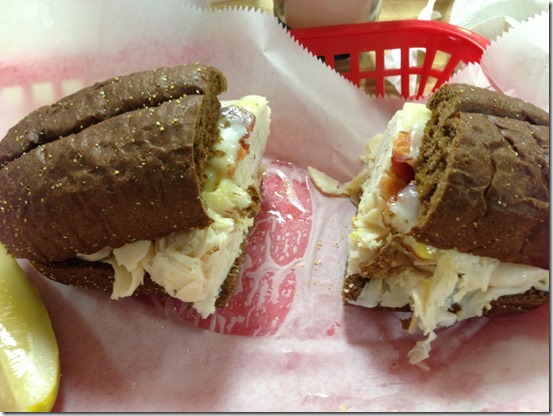 The only thing that could have made it better is if they had a female version of the menu, calling it 8 ounces of meat instead of a half-pound. 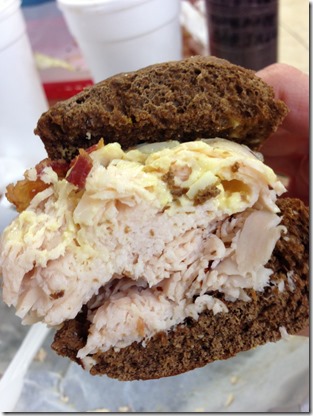 I quickly brought Chris back, and he ordered some sort of sausage-fest that brought glee to his soul. 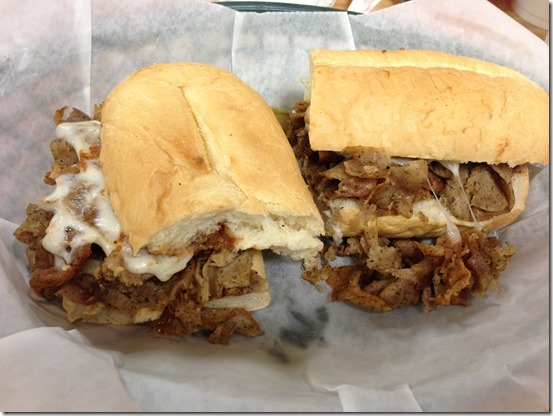 Because it is the place to see and be seen in our Church, we ran into friends, who were kind enough to photograph their beautiful sandwiches as well. 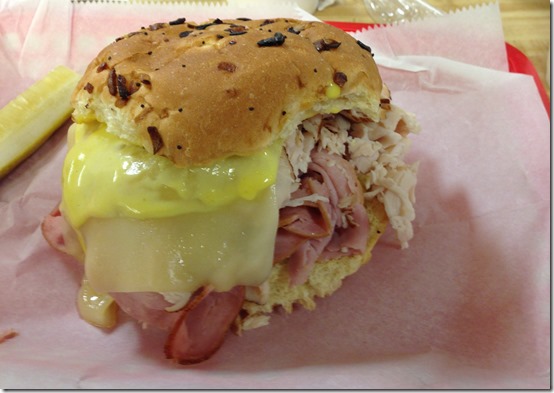 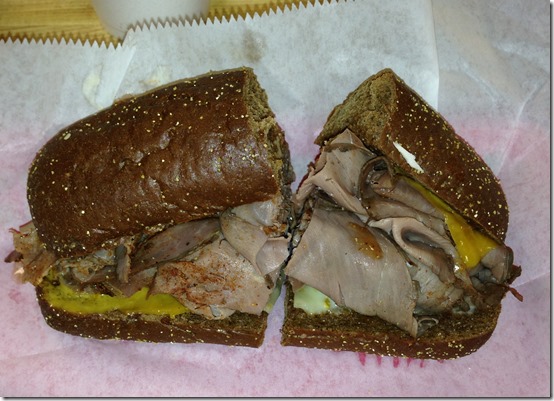 Although the sandwiches were pretty noteworthy, the most fantastic part of the meal was when my friend Nikki, who was sitting next to Noah, turned to him and said in an adoring voice, “You are just so cute I could give you a smooch!!”

I personally had no idea my two-year-old knew the word “smooch.”

But he took that as an invitation and launched toward her, mouth open and tongue sticking all the way out, sandwichy bits of saliva dripping forth.

Nikki lurched away from him but was abruptly stopped by the pole attached to our booth, thereby making an impressive gonging that might have been mistaken for a call to prayer.

And she did not escape. Noah made full contact, leaving her looking like Newman when he took the dinosaur venom to the face. 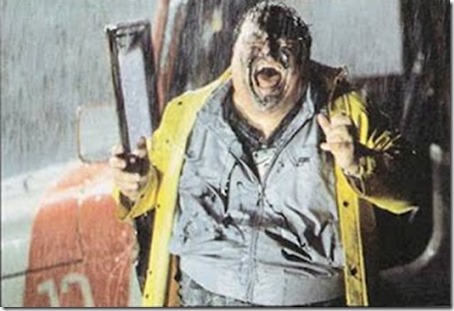 She took a few moments to de-saliva herself, but apparently didn’t realize the extent of the damage, as we had this text that evening: 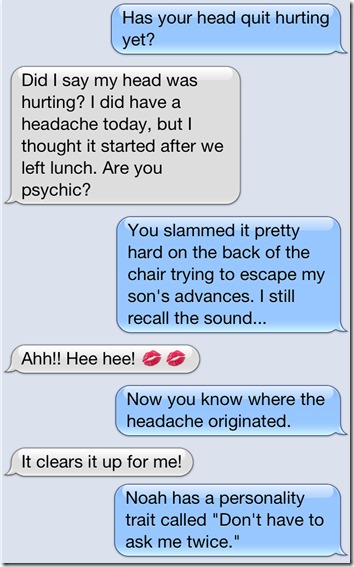 So that has nothing to do with my review of Mr. P’s except to say: mind the pole.

We go to Nabeel’s and Silvertron all the time – they’re basically our top two choices. But I’ve recently gotten addicted to a new dish at each that is truly a one-of-a-kind experience.

At Nabeel’s, it’s the Yemista – Greek Stuffed tomatoes. It’s been on the special board for a while, but just made it to the main menu. I never tried it because it didn’t sound filling enough for me. But one night, I wasn’t too hungry, so I ordered it. 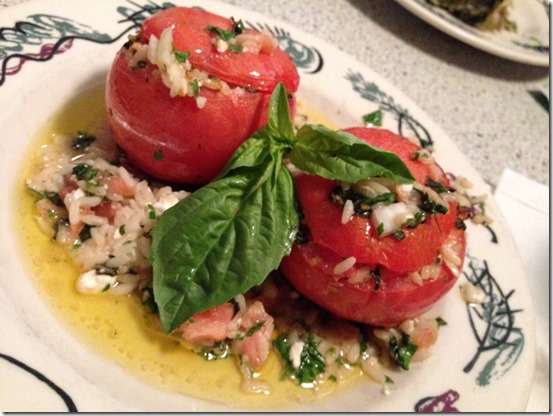 The tomatoes are stuffed with intensely flavorful rice mixed with feta cheese, olive oil, mint, diced potatoes, and strong herbs. It’s topped with a basil leaf that I always cut up and mix in. It’s summer comfort food at it’s best, and much more filling than it appears.

At Silvertron, my new favorite is Pork Shanks and Sweet Potato Fries. 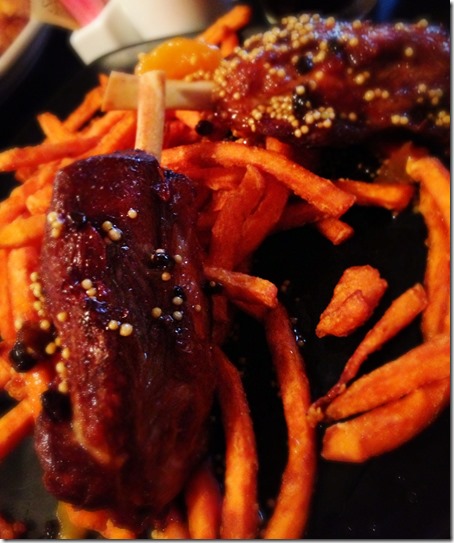 I surprised myself when I ordered this, because I am not a pork-on-a-bone kind of girl. Not because it grosses me out, but because I don’t want to look like a Barbarian while eating (or anytime, really.) But this pork fell off the bone, and the sauce, a creative (to say the least) blend of sesame seeds, candied apricot, raisins infused with white wine, and spicy mustard was just as good on the fries as on the pork..

And the winner of round four is… 26. With an honorable mention to Nikki.

14 thoughts on “50 Restaurants in Crappy Photos, Round Four.”