Real chocolate. Chocolate like I’ve never even come close to tasting before.

And I want to pull you down with me.

(I know this because several of you told me so.)

And that’s okay. I would have hated me, too.

I attended the Third Annual Atlanta Food & Wine Festival, hence all of the pretty tweets. Last year I attended as well, and had major breakthroughs in my appreciation of fine cheese and local sourcing of food.

But this year. This year was all about the chocolate.

Can you tell the seriousness of my issue yet? It’s bad. Real bad. Like, get a job to support my habit bad.

I road-tripped with my blogger friend Jamie, and the first session we chose was on fine chocolate.

It was taught by Kristen Hard of Cacao Atlanta Chocolate Company and Edward Russell of Parish Foods and Goods.

This is where I found out that we’ve all been eating a sham for our entire lives.

You see, chocolate fell victim to the same curse as tomatoes: America was impatient, America wanted it whenever they wanted it, and America genetically modified the seeds to make them grow quicker, more plentiful, and with less work.

And, just like tomatoes, chocolate lost its taste and quality.

But despair not! For there is now a band of chocolate superheroes who are scouring the countries of Venezuela, Peru, the Dominican Republic, and more for the fabled original strains of the Cacao Tree.

(Seriously – Kristen Hand Is basically a chocolate geneticist. She told us the numbers and letters of the exact genetic strain of heirloom cocoa bean that we should all desire, but I didn’t write it down.)

(Which is probably good, since it might bring the Chocolate Mafia down on my head.)

So here’s the deal: Cocoa beans are found inside of (relatively) giant pods on cacao trees. 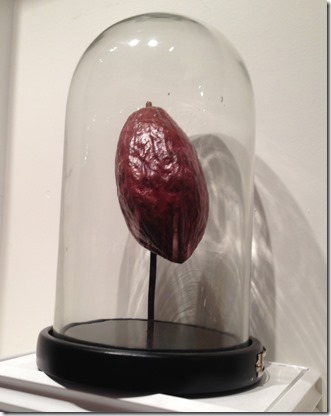 Long ago, these beans were pure white, providing fantastic flavor and purity. But as we modified the genetics, the beans purple, adding a dry bitterness that chocolate was never intended to have, and masking its true essence.

So Kristen, along with other chocolate preservers, are doing amazing things to reinvent the industry. To rediscover lost strains, and to work with South and Central American farmers to understand the value of non-modified beans.

But here’s the deal: the beans are picky. They won’t grow out of their native soil. So once a plant is found, that’s where they have to be cultivated and grown. Kristen shared the story of one chocolatier that spent months doing nothing but scouring the Dominican Republic jungles to find just one Cacao tree with White Cocoa Beans. And he found it – just one. He brought the beans back to the states for genetic testing, then began the process of creating a cacao farm in the DR – but it will take six years for it to produce it’s first harvest.

That, my friends, is a proper chocolate adoration.

So after hearing all of this, they gave us our first taste of True Chocolate – paired, oddly enough, with radishes. 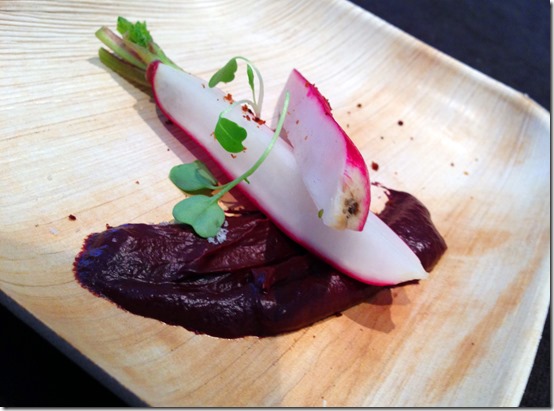 And it changed my universe.

I thought that I was a chocolate snob before, but my whole world exploded when I took my first bite.

And I knew that I was going to need a new budget item for True Chocolate.

The flavor, the richness, the experience – it’s indescribable. If you have a chocolatier in your city, you need to quit reading right now and go visit them.

As soon as the festival tasting tents opened, I was ready to find more.

There were two artisan chocolatiers that I immediately fell in love with – Chocolate South from Atlanta, and French Broad Chocolates from Asheville.

Chocolate South had beautiful chocolates with delicate flavors and lovely patterns, including the Georgia Peach and Mississippi Mud: 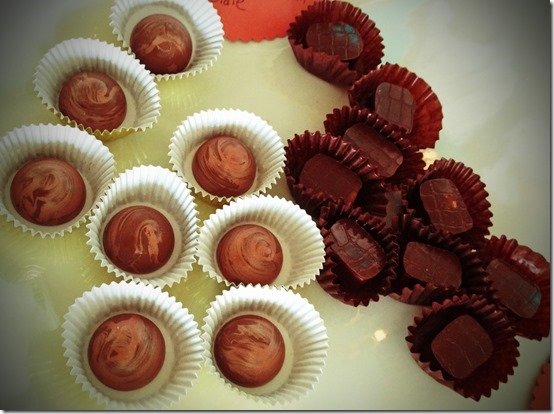 And French Broad Chocolates had…the most amazing (and beautiful) truffles that I’ve ever put into my mouth. 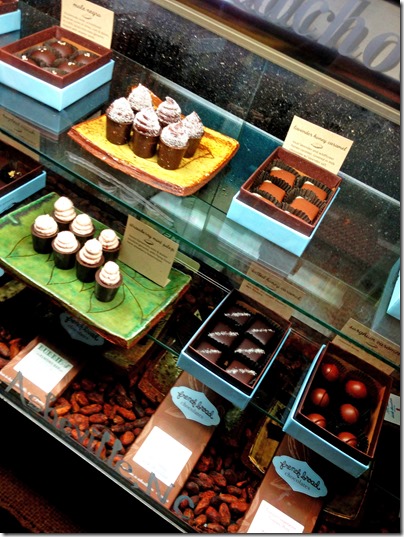 Dan and Jael of French Broad were so fantastic that they sent us back to our room with the best gift ever: 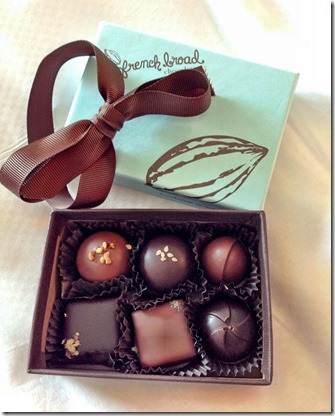 But those didn’t last long. And I couldn’t stop my chocolate neediness. So after the festival activities were over for the day, Jamie and I tracked down one of Cacao Atlanta’s cafes for more. 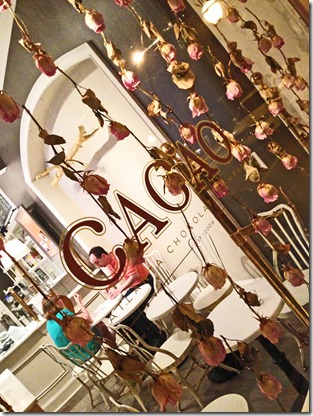 I cannot tell you how much it hurts me to know that Atlanta has artisan chocolate shops that stay open until TEN AT NIGHT. And French Broad’s Chocolate Lounge in Asheville stays open until midnight!

If we had this luxury in Birmingham, every date that Chris and I ever had would end at a chocolate shop.

At Cacao, Jamie and I drooled over (but not in) the Choco 77. 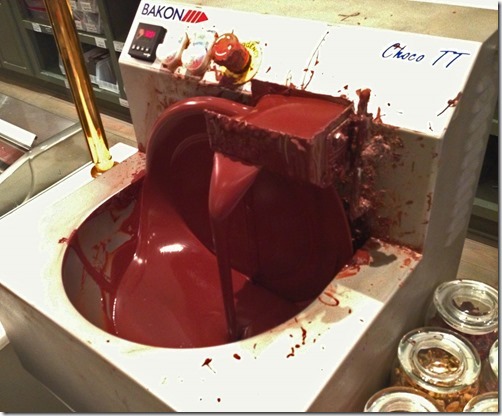 Photo by Jamie and her Rabbits

We stared lovingly at the truffles. 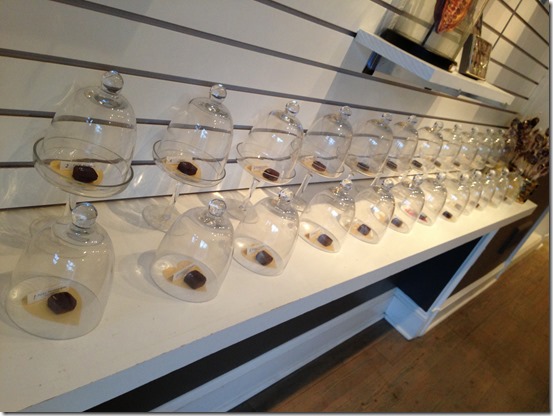 Even the bathroom was educational. 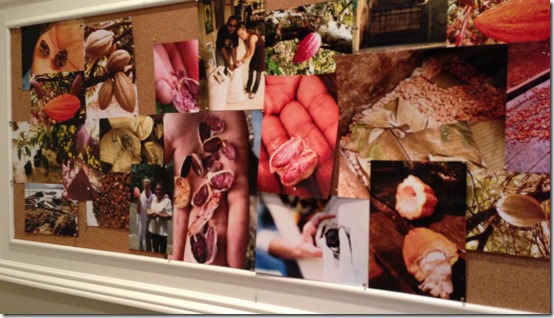 And I bought a bunch of artisan chocolate bars – “To take home to Chris.” 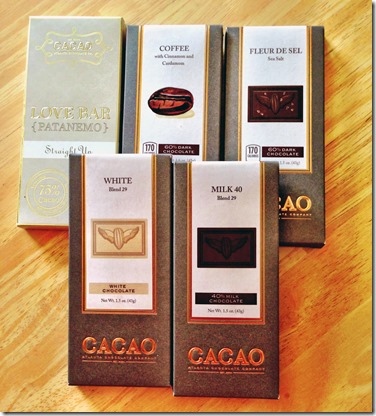 (In the interest of full disclosure, we have eaten one bar per night since I returned home, each split between the two of us.)

(I have a good husband.)

And so now I find myself. In a deep neediness for true chocolate, but with no local way (that I have found) to satiate my needs.

I begged Dan of French Broad Chocolates to open a Birmingham Branch. 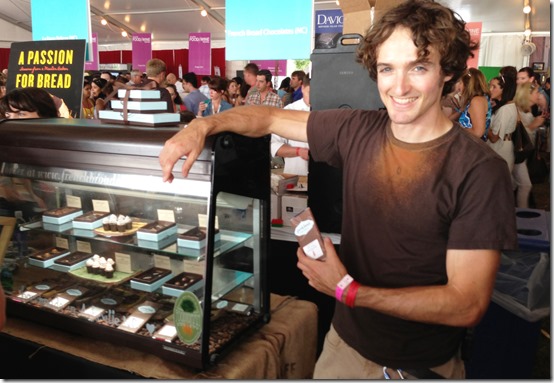 I repeatedly tweeted Cacao Atlanta, telling them that Birmingham could not live without them. 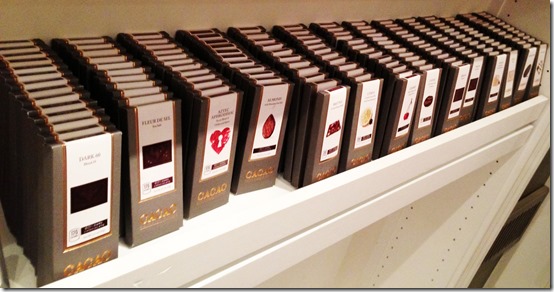 As does, I suppose, getting such a thing in every deserving city.

In the meantime, I may be getting a lot of refrigerated boxes delivered to my house, because it only takes one hit to become hopelessly addicted.

26 thoughts on “The Slippery Slope into Chocoholism.”