Any date that contains a moment like this is clearly a most remarkable one. 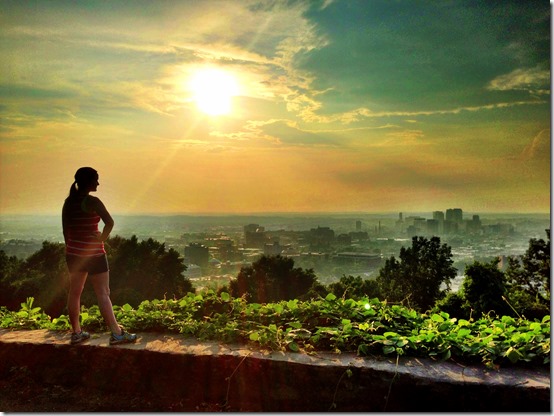 But it didn’t start out that way.

On Thursday, I was fighting a losing battle with anxiety. Thanks to my over-analytical personality (disorder), anxiety is something that I struggle with in varying intensities from time to time. And it’s not like I had anything legitimate to be anxious about – my mind was just set on being anxious. And every time I solved its problem, the stupid thing would latch onto something else that wasn’t worthy of worry.

At some point in the afternoon as I was praying through Philippians 4:6-7, I realized that I was really good at the NKJV translation of the first part of that passage: “Be anxious for nothing.”

Yup, that was me. Super anxious, and for nothing.

I needed to move onto the ESV translation: “Do not be anxious about anything.”

To give myself something to look forward to and focus on, I texted Chris and asked him out on a date for the next night. He agreed, then immediately seized the planning.

He wanted to take a ten mile walk. And eat casually afterward (while still sweaty). And did I mention ten miles??

He’s been wanting to take me on a walking tour of his favorite running route for a while, and although I did want to see it, the idea of walking ten miles did not sound like the date I was looking for.

But I recognized that sometimes he knows what I need better than I do (and I didn’t have a better idea,) so I agreed to his plan and mentally prepped myself for passing out somewhere atop Red Mountain.

But it rained, stormed, and flash-flooded all morning Friday. I second-guessed his usually immaculate planning. 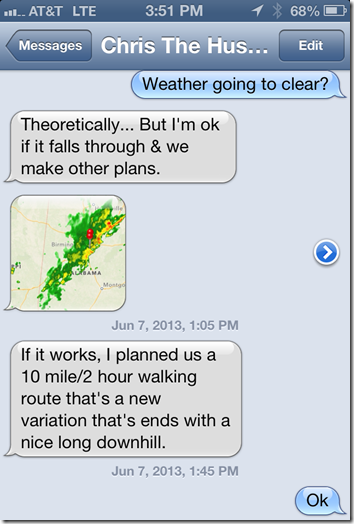 As Chris arrived home and the babysitter settled in, the sun came out for the first time, giving the wet world a beautiful glistening shimmer while leaving it oddly cool for an Alabama June.

Chris let me talk it out for the first few minutes of our walk, then he announced that our date would involve a lot of selfies – apparently he wanted to poke a bit of fun at the fact that last weekend, two bloggers he knows well road-tripped together and didn’t take a single photo of themselves.

So I submitted, and we took our first selfie in front of a beautiful landmark: the waterwheel house. 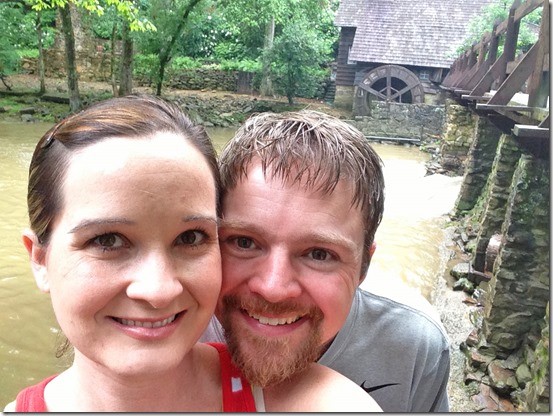 (Can you see the skepticism in my eyes?)

But it was cheery in a ridiculous sort of way, and so I took off running, surprising myself by not slowing for nearly a mile.

After stopping for a shoe/rock removal, 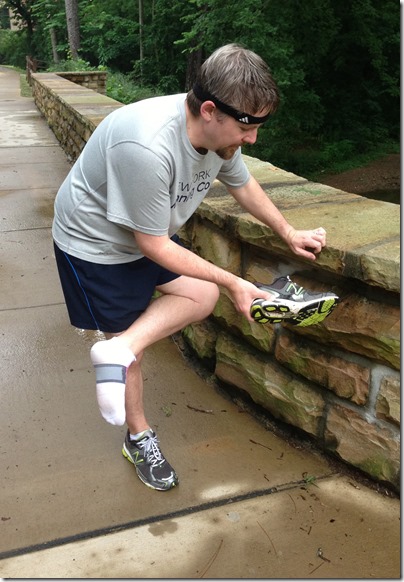 we took our next selfie in the Rose Garden at the Botanical Gardens, the sun shining mercifully on our walk. 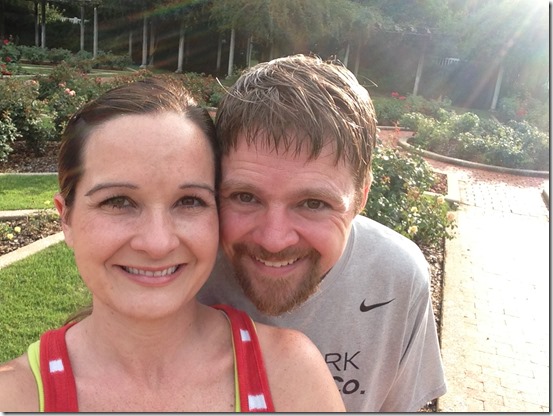 Chris then took me on some extraordinarily obscure trails deep in the Gardens. By then, the endorphins were starting to set in (and here I thought I was immune to those,) and I was beginning to understand the brilliance of his plan. 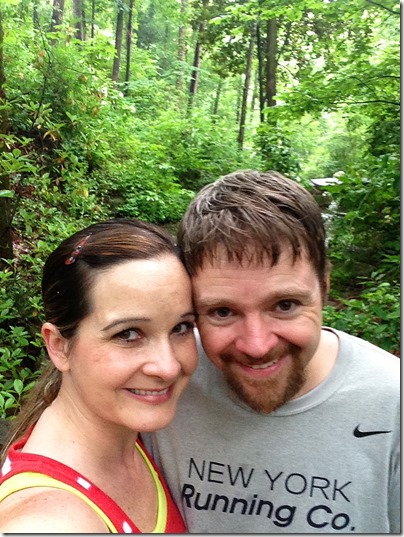 Then began the uphill (upmountain, really) trudge. But spotting these stunning hydrangeas (are they hydrangeas? I’m horrible with nature) helped stretch my euphoric attitude. 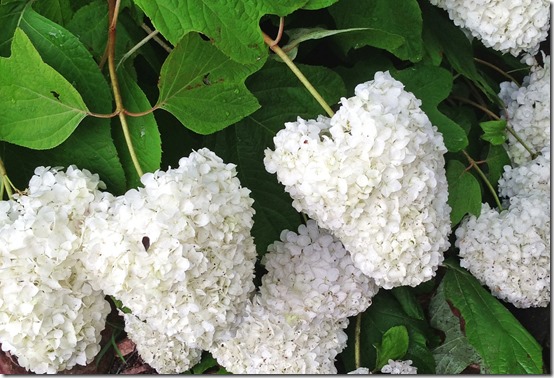 We passed through English Village and out the other side as I was starting to pant a bit. My legs ached, but I knew we were almost to the peak of the mountain (and he did promise all downhill at some point,) so I stayed positive.

Until Chris said it.

“Stratford Road is as high as I go on my run, but there’s another road to the left* that’s even higher. Let’s go see what’s up there.”

I mentally calculated that we still had at least 5 miles to walk to get back to the car.

But I trusted him (after all, he’d been right so far), and we headed up a winding road.

The houses lining the street had a beautiful Old-Birmingham charm, with overgrown stone paths and paint-chipped wrought iron gates. I was already imagining the family photo shoot we could have on this street. Until we turned the corner.

And all of my thoughts flew away.

My beloved city like I’d never seen her before. Wrapped in Kudzu, covered in a thick blanket of rising mist, and subject to the warm, rich glow of the setting sun. 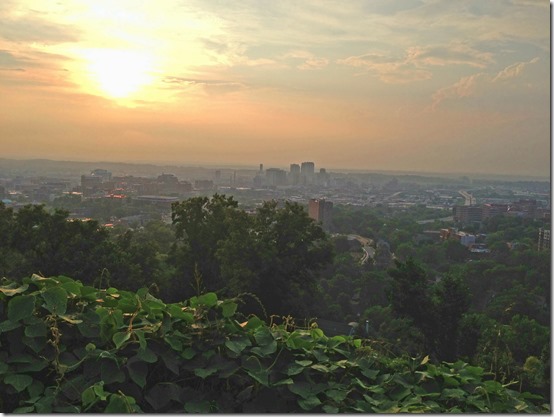 Admittedly, my first reaction was “Oh, if it were only a clear day!!”, but then I realized the beautiful effect of the mist, and shut up. 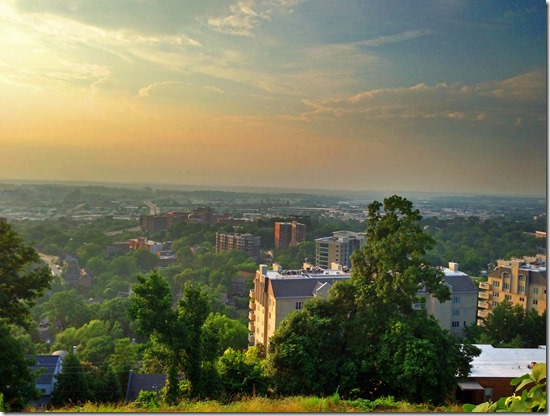 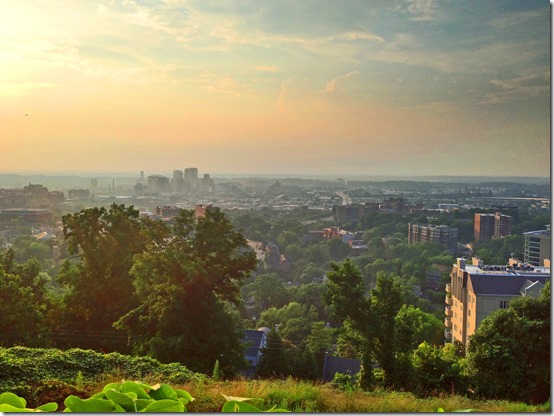 The houses that were facing the city were nearly as magnificent as the view, 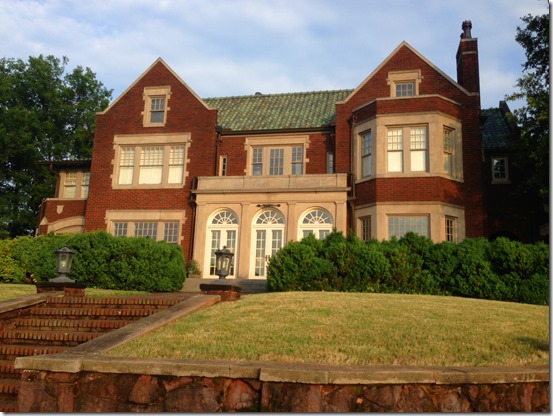 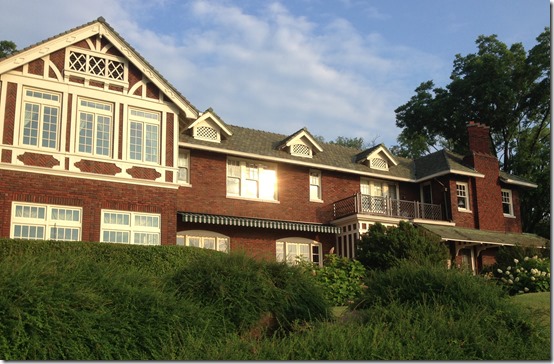 So I attempted a panorama.

The kudzu-lined wall was too tempting for me to not experience, so I hopped up.

Then Chris took my phone away and told me to be very, very still. He took two photos with my HDR app – one from each side. 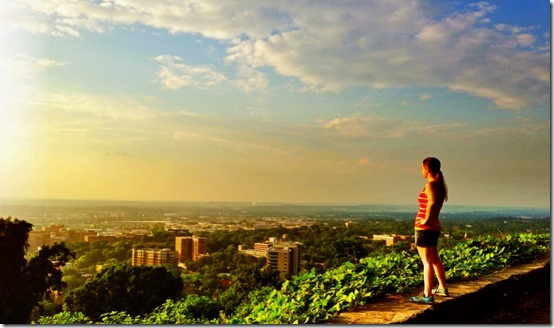 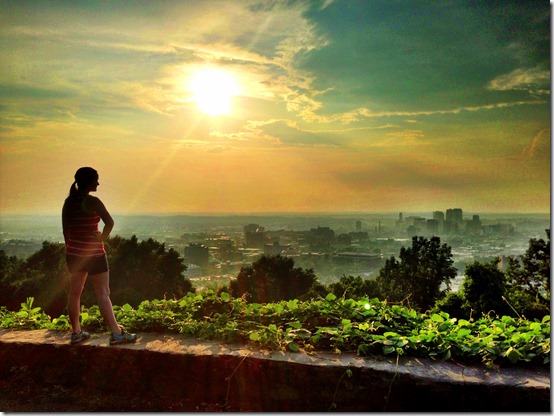 We knew we had experienced a magical moment with our city, as it was enshrouded in an evaporating storm.

But we didn’t forget to take our selfie – even my index finger got in the action. 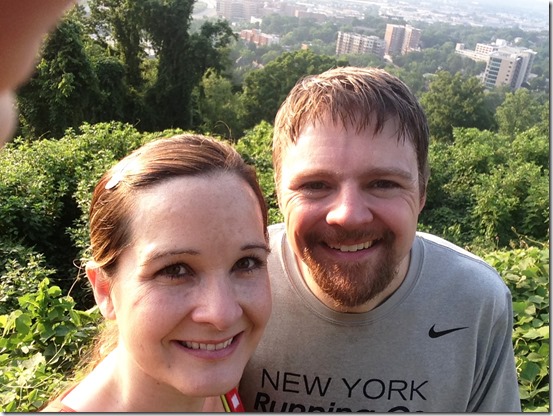 Before we left, I had to sit cross-legged on the wall for a few minutes, taking one more picture, then again immersing myself in the beauty of the moment. 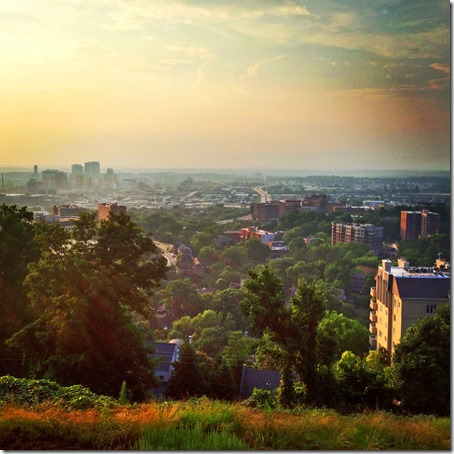 Meanwhile, Chris was trespassing in the yard above me, 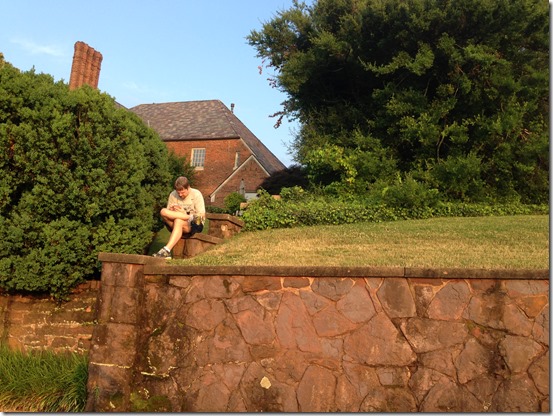 Once again taking my photo. 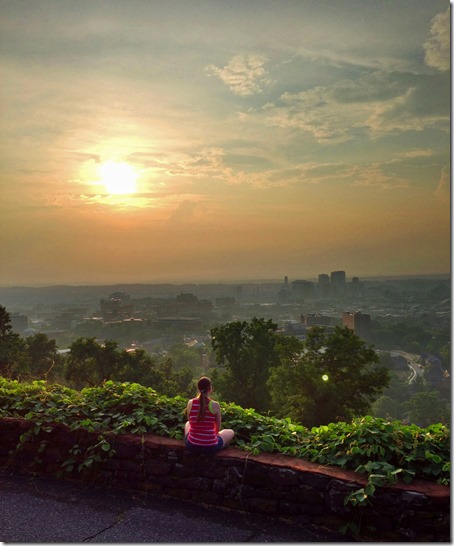 (This was also when I discovered that Kudzu has its own species of freaky spotless ladybugs – zillions of them on every branch.) 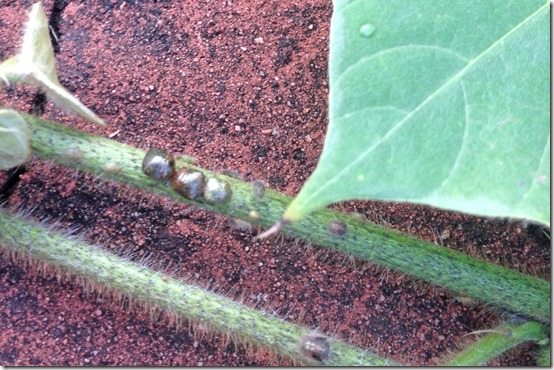 (It wasn’t long after this discovery that I was ready to move on.)

Our next stop was our traditional city view, Stratford Road: 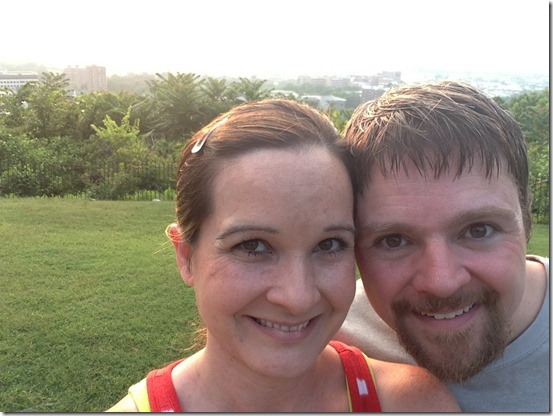 (Aren’t our heads so fabulous when masking a beautiful city view? If you want to see the actual view, it’s in Chris’ running post.)

Then Altamont Park, home of the somewhat sketchy cannon aimed at downtown: 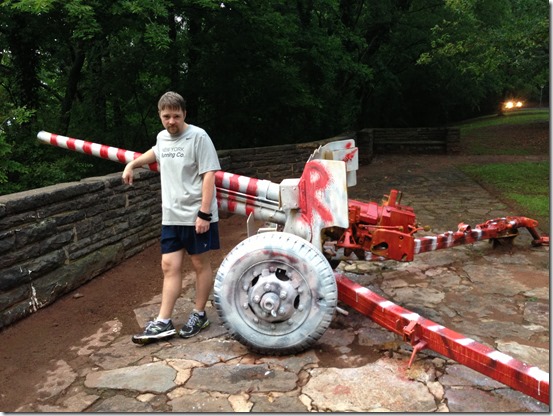 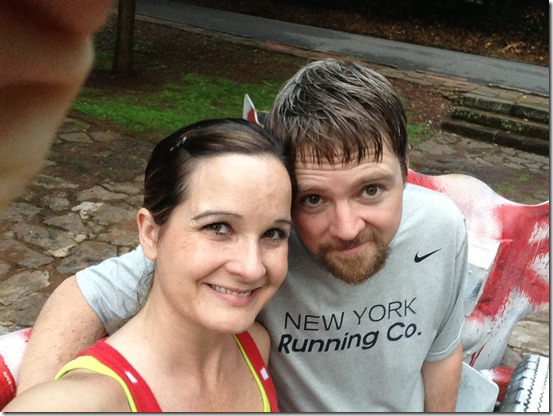 Down a windy dangerous hill with no sidewalks, but I didn’t care.

Somebody on that road had a magnificent wooden driveway-bridge over a beautiful creek, 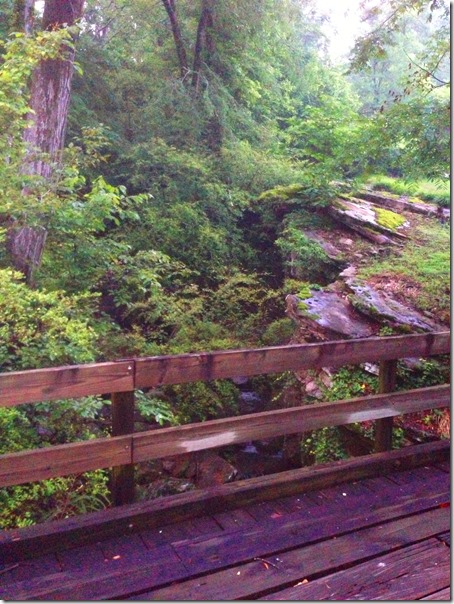 …which screamed for a selfie-stop. 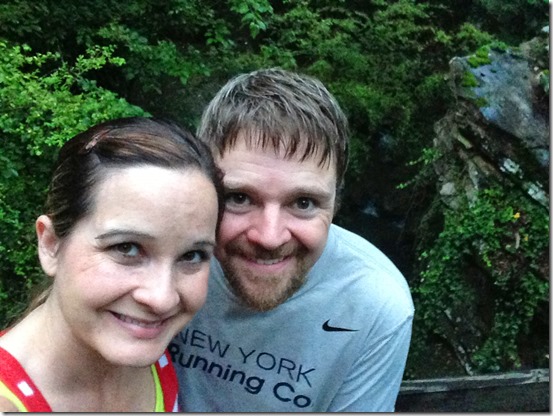 We made it to Crestline Village, where the most unattractive upshot selfie of all had to take place – for the sake of the Clock Tower. 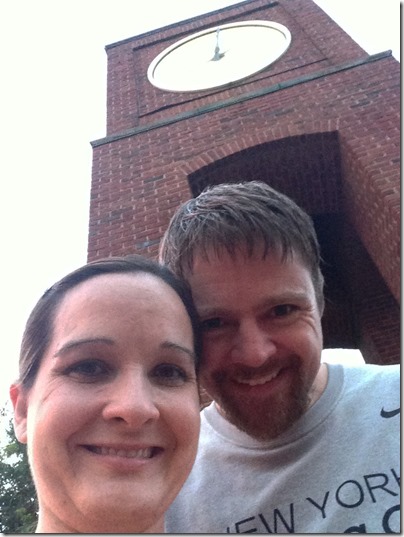 Because of my insistence on having a longer break at the lookout than he planned, the sun was setting fast. 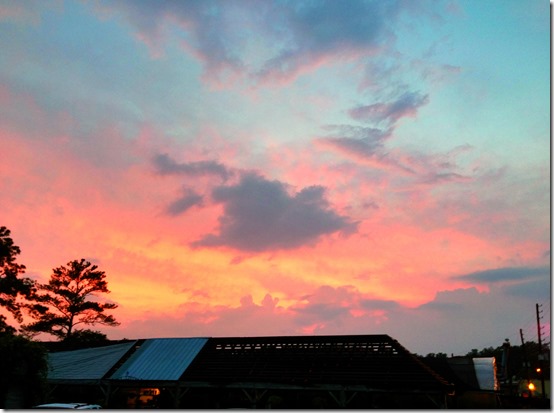 And the selfies grew in graininess. 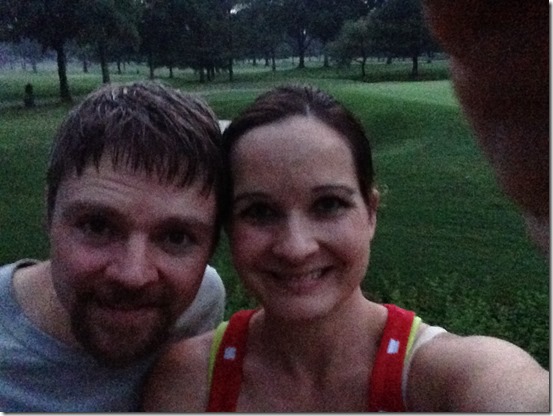 The creepy misty golf course beckoned for a photo op, and was the catalyst of the death of my phone battery. 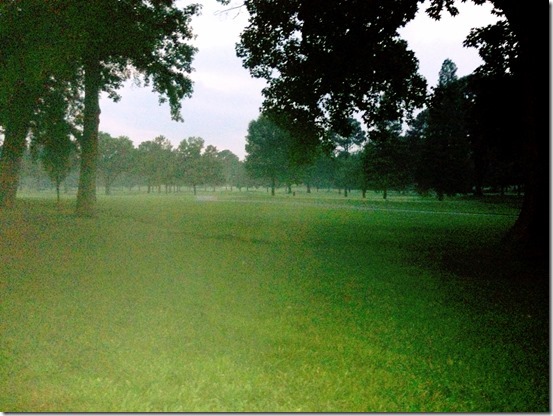 The last selfie of the night happened at Mugshots, who blessedly allowed us to eat despite our sweaty, odorous, yet overly-romantic aura. 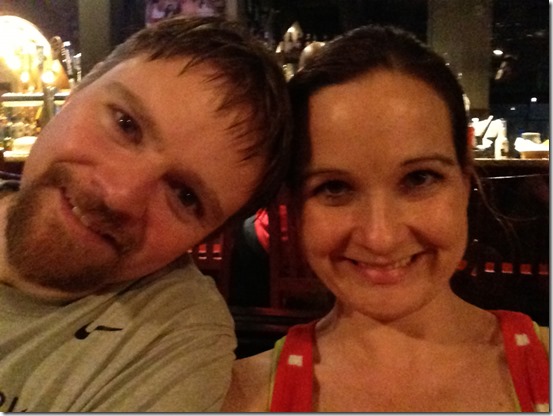 Of the ten mile tour, I ended up running about 1.5 miles of it, or 15% of the amount Chris typically runs. My legs still feel like they crossed the Sahara, but my mind is refreshed, and even euphoric.

And it was the best date of my life. 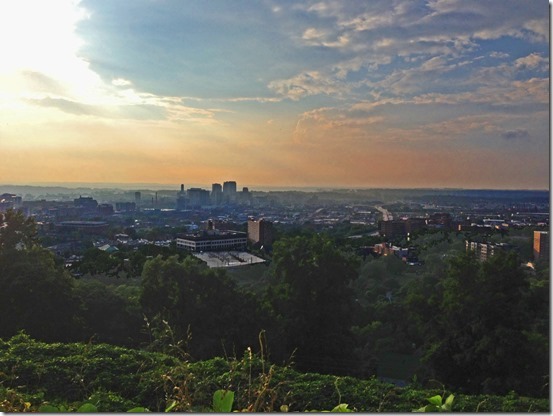 * I did not include the road name in this post out of respect to its residents. And mainly because I don’t want them to ban us from the street for life. But feel free to ask if you want to visit.