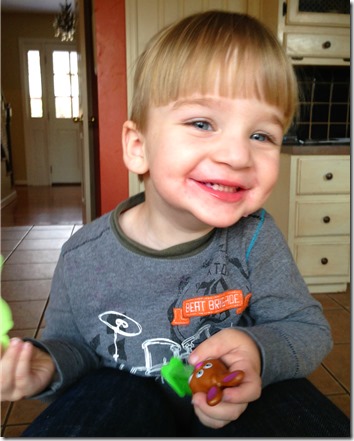 So the consensus after concluding Ali’s toddler quotes seemed to be to keep Noah’s quotes here (sorry B-Sides – it’s not you, it’s me.) Even though it seems a bit too over the top cutesy for my usual fare, I’m trusting you guys here – if you let me turn into a gooey sticky blog and don’t tell me, I’ll never speak to you again.

I’ve decided that Noah’s quote series should be called “What’s that Sound?” because he asks that question at least twenty times a day. Sometimes he answers it for himself, and sometimes he doesn’t.

For instance, one day when it was raining and thundering loudly, he asked (then answered,)

Therefore, What’s That Sound seems like an appropriate name for the things he says.

As we were rocking before bed the other night, he demanded, “See your tummy, Mommy.”

I pulled up my shirt…after all – he’s only two. This can’t traumatize him…yet.

He laughed, then grabbed a handful of the softest part of my belly and twisted.

“I eat cake. I eat cake from Mommy’s tummy.”

Ali was in the back seat playing a subtraction game on her iPad. For some reason, the problem 8 minus 3 was really stumping her.

I talked through it with her slowly, and she just wasn’t in the mood to figure it out.

Finally, I said, “Pretend you have eight of something. If you take away three, how many do you have left?”

Exasperatedly, Noah broke in and said, “IT WAS FIVE!!!”

…So either he’s the world’s best guesser, or he’s a math prodigy yet to be discovered.

We were shopping a while back, and Noah grew tired of the outing.

We were all playing in the living room, but I wasn’t paying much attention to Noah. All of a sudden, he said, “Oh man!! ……I call Pop.”

I handed him Ali’s iPad, and he called my Dad on Skype.

Then it hit me that he had said “Oh Man,” which is what he usually says when he makes a mess. So I looked around and realized: he had spilled his drink all over the floor, and somehow, calling Pop to talk about other things made it all…better?

Given Noah’s love for all things with wheels, I asked him at bedtime last night, “Do you want to be a race car driver when you grow up?”

“Do you want to be a tractor driver?”

“Well what do you want to be when you grow up?”

Noah woke up screaming in the night, so the next morning I asked him about it.

“Do you remember crying last night?”

“Did you have a bad dream?”

“What was it about?”

Another morning, Chris came into Noah’s room right as he was waking up, so his dreams were fresh on his mind.

We sometimes get into random conversations. I don’t remember how this one started…

I asked… “Did you eat Mommy’s shoes?”

“Did you eat Mommy’s shirt?”

I was enjoying a quiet moment of solitude in the bathroom one day, amazed that Noah hadn’t followed me in.

But he wasn’t far behind.

He came running in, dug through the trash, found an empty toilet paper roll, held it up to his eye, pressed the other end onto my eye, and said, “I SEEEEEEE YOU!!! I SEE YOU MOMMMY!!!!”

Me: “Do you want me to change your diaper?”

Earlier this week while I was doing dishes, Noah ran into the room and said very sadly,

“What are you sorry about?”

I’m more than a little scared to find out.

15 thoughts on “What’s That Sound? The Inaugural Issue.”