{SPOILER ALERT: Vague references to Season Three of Downton Abbey are in this post. Read at your own risk.}

A couple of weeks ago, a reader wrote on my Facebook Page:

I read it, and I puzzled.

She was right – despite my fandom, I had certainly never picked up on a resemblance of my daughter to any Downton Abbey characters.

At least it wasn’t Edith.

And Cora is a beautiful lady (even though she always has the exact same facial expression.)

But as I sat with my phone in hand, pondering how in the world my daughter could look like her, I pulled up a photo of Ali, then found a photo of Lady Grantham. 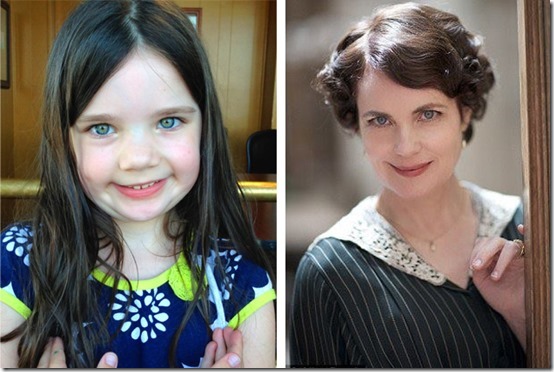 What could this mean?

How should I train her correctly?

Clearly, I’d be totally fine with her marrying British Royalty. After all, I had my own ambitions of marrying Prince William, but ultimately I decided that the fact that I was six months older than him might make it too weird, so I let him off the hook.

(Plus I imagined the pranks that Prince Harry would come up with would make for a complete bloody mess of a wedding getaway car.)

(And Camilla Parker Bowles as a Step-Mother-In-Law is what Horror-Fairytales are made of.)

(Poor Kate. I should have warned her.)

But back to Ali. The only reason that British Aristocracy ever marries American Women is if the woman in question has a massive family fortune with which the aristocrat can use to save their family estate, and that’s not really going to be possible around here.

(Unless Ali does a better job of saving her $5 allowance, or perhaps sends out royalty support letters.)

So I decided to strategize in a different direction.

Perhaps I should notify the producers of Downton Abbey that my daughter is available for any needs they may have. Such as a prequel of young Cora in the United States. Or perhaps a dream sequence or childhood memory. After all, her wardrobe would be stunning. And I bet they’d let her keep a piece or two for dress-up.

(And I’d get to meet the cast. Which would be way more exciting if they hadn’t KILLED EVERYONE THAT I CARED ABOUT.)

But at least they hadn’t killed Cora. So I knew there was hope for Ali’s future.

As I was pondering all of these things in my heart, we took a trip over the river and through the woods to my parent’s house, and I had the realization of where Ali’s antique soul originated.

This is not a scene from Downton Abbey.

This is my Dad, driving his grandkids around his property. 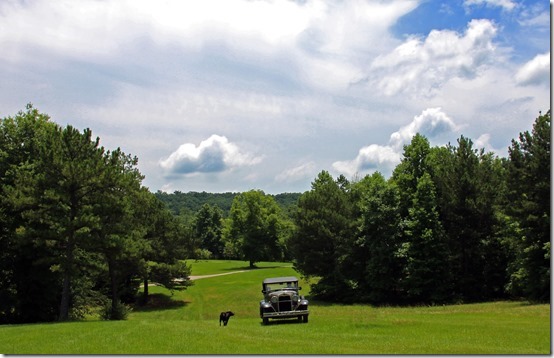 When she gets her big role, I can be confident that she’ll be chauffeured properly.

16 thoughts on “The Downton Connection.”