Disclaimer: Not for the Ladylike of Heart.

I’ve been feeling a small measure of guilt recently about our non-existent household rules about “potty-talk.”

Perhaps these rules don’t exist because our children are more polite than us.

For instance, I might have been heard singing the song,

At which point my daughter interrupted me and told me that those were not polite things to talk about.

“We should only talk about bathroom things when we’re in the bathroom, Mommy. And you were standing outside of the bathroom singing into it.”

I might also have recently penned what will certainly be a multi-platinum award-winning single to help my son understand where he can and cannot do such things, roughly to the tune of “I’ve got Joy like a Fountain”…

You really should hear me belt it out. And it’s even better when we Noah and I sing it in rounds.

Ali, again, is not pleased.

But ultimately the blame is circular, because it is the very act of having children that creates such commonness to poo talk.

I mean, c’mon. Anyone who has spent two years changing diapers and then a year trying to teach a barely-talking-but-very-opinionated two-year-old to go to the trouble of leaving their feces in a cold, hard, cavernous porcelain bowl instead of in the comfort of their warm, soft, familiar diaper has had to come to terms with talking about poo.

So with Ali herself to blame (as she gave me plenty to talk about during her potty-training era,) I would like to excuse the fact that, upon noticing a particular bathroom mural for the first time, I giggled with much mirth.

It was a hand-drawn picture of a creepy/goofy man with his title written above him: “Warm Duke”.

The Warm Duke resides in the co-ed bathroom of one of my favorite restaurants. He’s always there to chat with and get a giggle from, playing the part of my very own Birmingham Moaning Myrtle.

For at least a couple of years and perhaps longer, I have always looked forward to visiting The Warm Duke, and would be disappointed if I had to go into the other (also co-ed) bathroom.

It never occurred to me that Chris wouldn’t have noticed The Duke, since he resides directly in front of the toilet at eye level when sitting.

(I forget about boys and their bathroom methods.)

So when we were dining there and I casually mentioned The Warm Duke in conversation, I was surprised by Chris’ response.

He choked and asked, “The Warm What??”

“You’ve never noticed The Warm Duke on the wall in the bathroom? Seriously?”

“Go. To the bathroom right now. And visit Sir Warm.”

I then left, because I felt the need to say hello, and came back, laughing.

Since Chris’ introduction, we always make sure to invite His Highness into our conversation when visiting that restaurant.

So you can imagine my great distress and devastating feelings of loss when texting with an employee of the restaurant who happened to mention that the bathroom got painted. I don’t know that she was prepared for my visceral reaction. 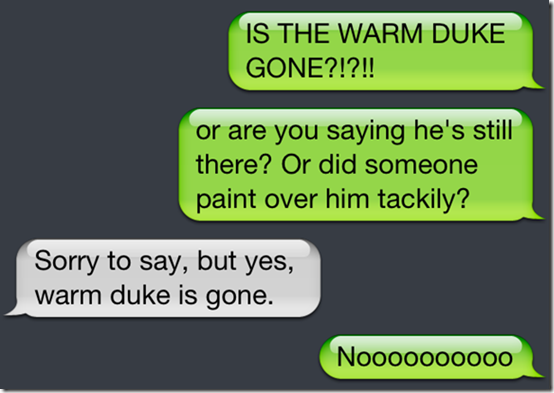 I immediately began scrolling through my iPhone photos. Even though I was quite confident I had captured a photo of him at some point, the thought of not being able to find it…or worse, of having accidentally deleted it…was too much to bear.

But I couldn’t find him.

So I searched again, mumbling under my breath about being willing to peel the paint off the bathroom walls if I had to.

And couldn’t find him again.

Later that night, I searched again, with the determination of Greta Van Susteren on an exclusive case.

And with much glee in my heart and relief to my soul, I found a photo of him, potentially the only remaining artifact proving his existence. 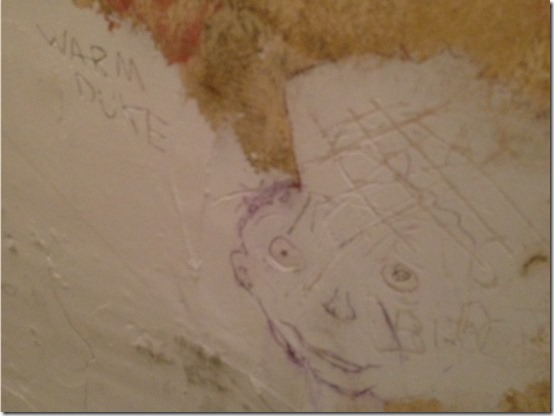