In December, I introduced you guys to Sifteo Cubes. They’re a fun gaming system for kids, and Ali still adores them.

They’ve recently released a few new games, including one that Ali is wild about, Sandwich Kingdom: Ice Palace. It reminds me of the text-based choose-your-own-adventure games that I loved as a kid – on our very first DOS computer.

(Did you ever play those games? I think we had one called Bavaria that I was obsessed with. You had to type which direction you wanted to walk with “N”, “S”, “E”, or “W”, then you would find dead ends, run into monsters, or discover great treasures. The fun in it was that you couldn’t “see” where you were going, and had to visualize it in your head.)

In Ice Palace, you place two or more Sifteo blocks next to each other to reveal the pathways: 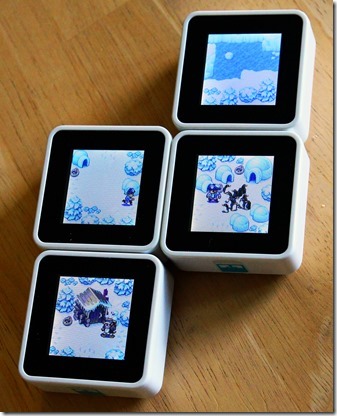 Then you can touch them to tell your guy which way to go. 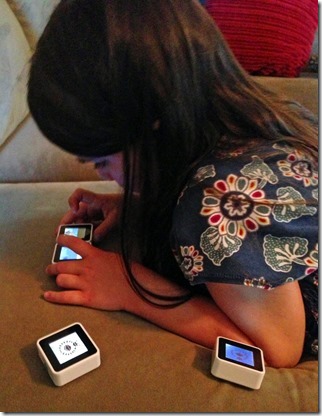 Another great thing about this game is the written narration. It encourages Ali to read, imagine, and enter into the game instead of just playing something mindless without a plot. 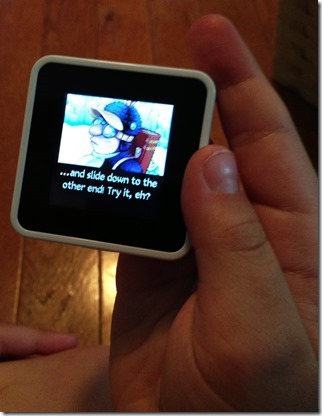 She also has to read clues and figure out what they mean, but they are simple enough that she can figure them out. They also test her memory by sending her back to a prior location, so she has to remember which order to put the blocks in to get back there.

These cubes are great for summertime boredom or rainy afternoons, and also good to keep her brain sharp throughout the summer, since so many of the games are “sneaking” in learning.

Sifteo Cubes are available through their website, where they are offering free shipping through June 21. Also, Sifteo has given me a set to give away to one of you! The gaming system will be pre-loaded with a set of games, including Sandwich Kingdom: Ice Palace.

If you would like to enter to win a Sifteo Cube Gaming System (worth $129.95), simply leave a comment on this post telling me your favorite summertime boredom-beater for kids. For a couple extra entries, feel free to use this Rafflecopter Widget to follow Sifteo and me around:

This giveaway will be open until Monday, June 24.  I will announce the winner Tuesday, June 25 on my Giveaway Winners Page.

Disclosure: I was not compensated for this post, but was given a download code to review the new game.  My opinions are always my own.