A week ago from tonight, I found myself losing my mind in the shallow end of a pool. Questioning my ability to be a parent, and doubting my purpose in life.

What had led to this travesty? How could my life be so complicated when standing in a swimming pool?

Thirty minutes before, my daughter began having a complete panic attack at even the thought of getting her face in the water. Or even her chin.

One hour before, I had done the treacherous work of getting my two children ready for the pool, driving to said pool, and taking off my two-year-old’s diaper and putting him in a swim diaper. Only to then find out that the pool was closed for a swim meet. This was followed by calling a family friend and begging them to let us use their pool.

Four hours before, at the first of three pools for the day, Ali’s swimming teacher told me the grave news that my daughter was not willing to get past the whole “water” part of swimming, and so I needed to work with her before the next day, or she would be fired.

(Okay. He actually recommended that I pull her out because he didn’t want me to waste my money. But still – only my kid could get fired from private swimming lessons.)

But four and a half hours before, halfway through that swimming lesson. That’s where the true root of my meltdown originated.

It was the second day of lessons with Mister Ray. Perfect for my intensely fearful daughter, he was calm, laid-back, and gentle. (Let me know if you need his number.) He didn’t try to trick her, and he never let her get scared.

(Unlike myself. Who is apparently horribly scary in the pool setting.)

Despite her six and a half years of built-up water/face contact fears, Ali adored Mister Ray. The day before, she had giddily giggled at everything he’d said, and was oddly not at all nervous about the pending confrontation between h2o and her facial orifices. 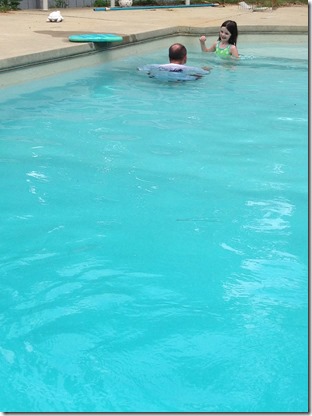 Noah and I had tried to stay far away from the lessons so as to not impede the happiness that was occurring. I thought he would be happy scooping and dumping, since it’s all he ever wants to do. 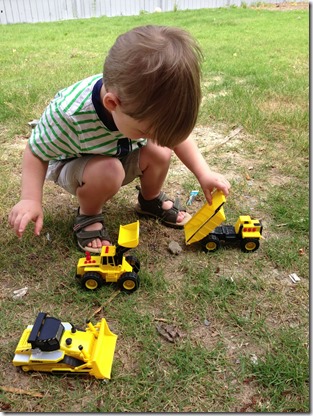 But he was not.

Thanks to teething, heat, and general crossness (I’ve taught him to explain to people, “I’m a little storm cloud”), he made it known how unhappy the arrangements found him.

So on Day Two (the fateful Tuesday in question,) Mister Ray, being the kind and merciful guy that he was, suggested that I let Noah hang out on the stairs of the pool. After all, our lessons were in the middle of the day, it’s June, and have I mentioned that we live in Alabama?

I happened to have Noah’s swimsuit and a swim diaper on my person, so I quickly took him up on it and plopped the kid in the pool. 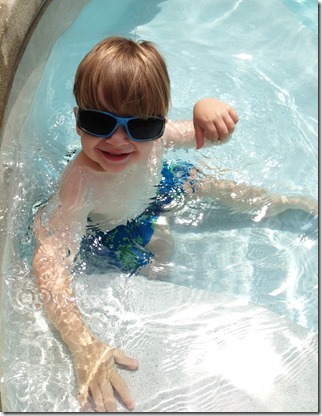 Noah was happy, Ali was happy. Mister Ray was happy to explain how water doesn’t hurt our face for the four-hundred-and-sixty-seventh time. 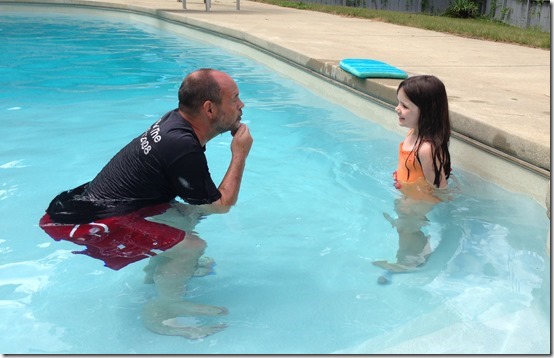 I sat on the side of the pool, soaking up the rays of sunshine and of happiness exuding from my children.

Until a few minutes before the lesson was over. When I looked next to me and saw a dinner-plate sized pile of puke directly adjacent to my hand and creeping closer at an alarming rate.

“How did PUKE get next to the pool? We’re the first lesson of the day…and Ali didn’t throw up. I’ve been watching Noah. And Mister Ray seems healthy…so that’s strange.”

I looked at it and I looked at it, and then I looked at Noah, who was standing in the pool. Which is how I noticed the unhealthy yellow-brown tinge on the top of his swim diaper.

Nonononono NO NO NOOOOOO!!!!

In denial, I stretched the backside of his diaper open and peered inside…then yanked my finger back out with a new, thick coating.

That pile of puke was not puke. And if he had left that on the side of the pool…how far and wide had he spread his love?

I grabbed him out of the water and ran over to the sidewalk, where I had zero wet wipes. Or shop towels. Or a HAZMAT suit.

I told him to NOT MOVE AN INCH and ran to the car. When I came back, he was lying on the sidewalk with his feet sticking straight up in the air.

As carefully as one can (which isn’t very), I shimmied Noah’s sopping wet and unpleasantly squishy swimsuit down his wet legs, while things that must not be named dripped out.

Then came the door to the underworld.

The ripping of the sides of the Swim Diaper of Hell.

Nothing can make poo nastier than being marinated in water. Especially when that water has had a really good chance to mingle, thereby creating a Lake of Darkness.

Let’s just say that I, who prides myself in never gagging at my kid’s various productions, totally gagged.

I managed to get the Bog of Eternal Stench into a bag without spilling it everywhere, wiped him up, scrubbed the sidewalk with a wet wipe, then went to attend to that gigantic pile next to the pool.

At which point I realized: Mister Ray and Ali were still practicing blowing bubbles in the pool. That pool.

“Hey Mister Ray…um…you might need to shock the pool and then some with a treatment. Noah just…had an issue.”

About twelve wet wipes later, I got the pool deck clean…ish.

Then I looked into the pool and saw a sinker.

(As opposed to a floater.)

I leaned over and dipped it out with my bare hand – it was a poo cashew.

Like, literally. Left over from the previous day’s granola consumption.

All the while, Noah was screaming because I wouldn’t let him back in the pool.

It was time for the lesson to be over anyway, so Mr. Ray had tactfully hopped out of the poo(l). While Noah continued to scream, Mister Ray broke the news about Ali’s inability to get over the whole water thing.

I apologized profusely for my son and my daughter, promised to work on her swimming in the next 24 hours, then collected my children, their shoes, their towels, and their poo and loaded it all in the car.

It was one of those car rides where Mommy needed a time out.

“No one talk. I need silence.”

I processed my mortification with regards to my child’s murder of the pool.

I processed my kid’s inability to conquer her fears.

Then, when my voice returned, I began teaching Noah a new No-No-Poop Catechism.

Noah repeats his catechism at the mention of the pool, and has not pooped in any more of them. In fact, he actually didn’t poop for several days, since he met of that need so thoroughly in that nuclear waste site of a pool.

I recovered from the day with the help of a lot of artisan chocolate consumption.

Ali did indeed take an early retirement from swimming lessons. Although she could never make herself voluntarily put her face fully in the water, she did adore Mister Ray so much that on the last day, she allowed him to do this – twice – without any tears. 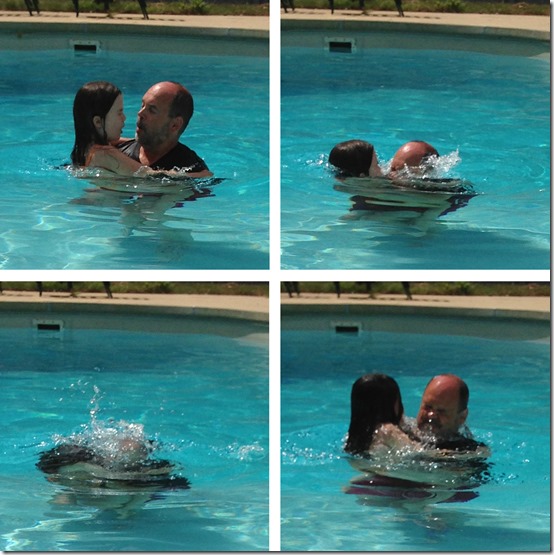 I was amazed, stunned, and otherwise speechless.

If only she loved me as much as she loved him, I might be able to help her conquer her fears before she’s twenty-one.

But I don’t see that happening.