This is a guest post by my Dad. Besides being an expert mechanic on all things and especially those antique, he is a writer, an artist (one of his pen and ink drawings can be seen below), a Tech Inspector for the Le Mans racing series, a beekeeper, a Chicken Coop Designer, an adventurer (I’ve been begging him to write about his 45 day race from Beijing to Paris, including Tibet and Iran – y’all help me convince him,) a former Air Force sergeant and radio repair technician, and a former police officer.

(And I’m pretty sure I left off at least a dozen other occupations and talents.)

Noah and I went to visit a couple of days ago, and afterward, Dad immediately wrote this guest post.

His prior guest posts can be found here and here.

I grew up around motorcycles. Literally. Some of my earliest memories involve them. My Dad was a Harley man from his youth, owning his first before World War II, and was a motorcycle policeman at Fairfield when I was born. I remember going to T.D. Howton’s Harley dealership in Bessemer with him, where I had what I thought was my very own seat in the back room. It was a huge old Harley seat on rollers that was used by the mechanics to service the bikes. It was made out of leather and even today, if I smell leather, that is where my memory takes me.

Dad kept a Harley even after he left the police and used it to ride to and from work. I vividly remember waking up in the middle of the night when he arrived home.

(Harleys were not quiet bikes even then.) 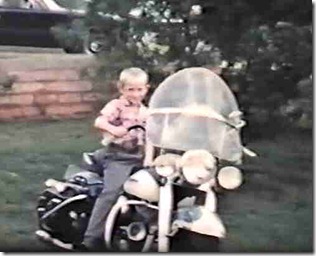 I was in the first grade when my Dad first let me control the Harley by myself.

(Or at least let me think I was in full control – I was the only one touching the handlebars.)

To feel the acceleration of the bike when I twisted the throttle was a thrill that is as vivid today as it was when I was six years old.

Dad bought his last Harley when he was eighty. It was a 1951 EL that a friend had stored in a basement since the early 70’s. We brought it home and it didn’t take much to get it running. He would sit in the garage for hours polishing that bike and remembering happier times, times before cancer. He was unable to kick start the bike, so occasionally I would start it for him to hear, feel and smell. I actually had him on it one day and he would have ridden it, but my Mom pitched a fit. 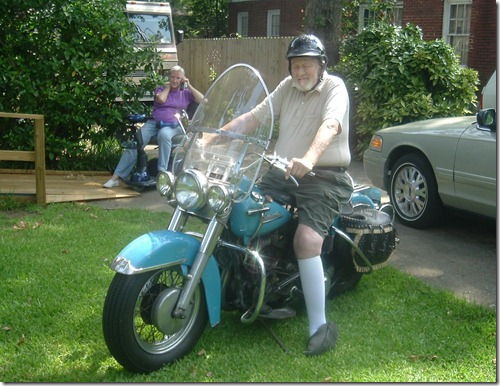 I got my first two wheeler when I was 12. I had a paper route and saved up to buy an Allstate scooter. It was not running, and I bet my sisters and I pushed it more than we rode it. It was also the first engine I ever rebuilt. I had to replace the piston, rings and do a valve job. The sense of accomplishment when it fired up was, for a 12 year old, something special. 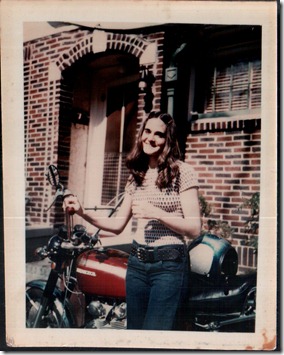 It was about this time that the Japanese bikes came to America, giving people a choice. Harley’s dominance was challenged. Heck, even T.D. Howton started selling Hondas. There was also the beginning of a cultural shift away from the outlaw image of motorcycles and those of us that rode them. Honda had an ad campaign that stated “You meet the nicest people on a Honda.”

When my wife and I got married, we had a Honda 450, the largest bike they made at the time. I was stationed with the Air Force in Biloxi, and we rode back and forth to Birmingham on the weekends. Some of the old image remained, even then. Sara remembers a Sunday School teacher while we were dating that, when she learned that I had a motorcycle, said: “I didn’t think you were that kind of girl.”

I, personally, am glad she was, and still is!

My kids grew up around motorcycles, too, but I’m not sure how ingrained it is in their lives. I, too was a police officer for a while, first at Fairfield, then Birmingham. I did not ride for the department, but had an extra job riding funeral escort. I also helped set up one of the first, if not the first Motorcycle Safety Foundation courses in the state. All of my kids were on a motorcycle while they were still in diapers. J.C., my oldest son, got his first bike at 17. Soon after,we decided to take a trip to Chattanooga. I loaded Nick, my youngest, on back of my bike and we struck out. However, the skies looked threatening, so we changed direction. We ended up that night in Ocean Springs, Mississippi. Yesterday, I had occasion to relive some of those memories, and to see some of the excitement in the face of the next generation.

I don’t know if motorcycles will be as big a part of Noah’s life as they have in mine, but he decided that he wanted to ride Pop’s motorcycle – the motorcycle that I bought, incidentally, the month that his mother was born. 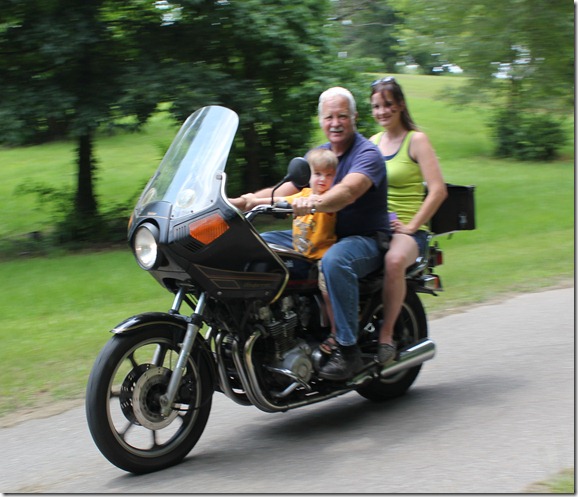 And before anyone gets upset, we did not go on any public roads, and didn’t go even 10 mph, but the moment was special. 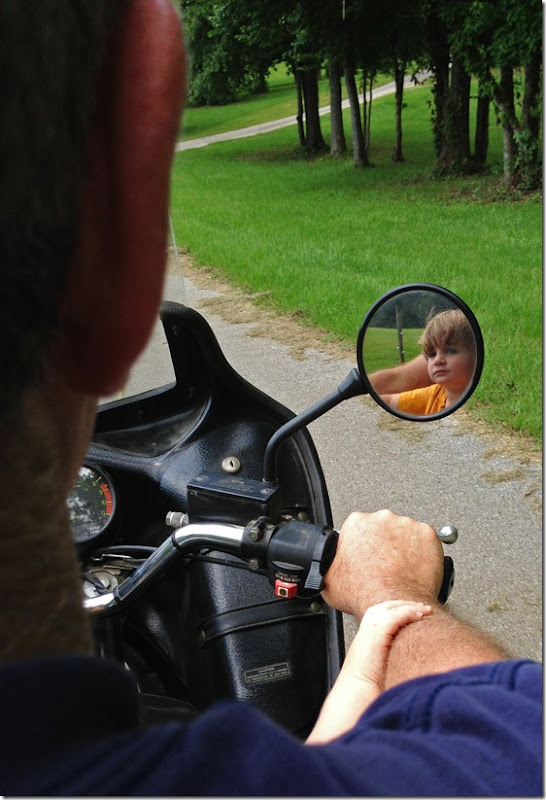 And I am pretty sure that he has inherited the gene. 22 thoughts on “Passing the Torch.”