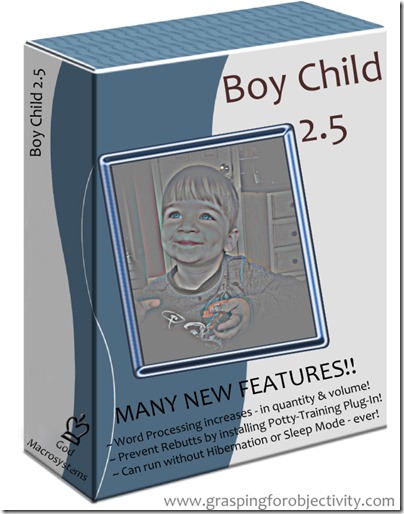 I have recently upgraded my software to Boy Child 2.5. Although in general, this new version is very visually pleasing and much less taxing on The Motherboard, I have noticed some bugs and issues, and was hoping you could advise me on how to work around them since you were so helpful with version 1.0.

The most significant problem I’ve run into is in Sleep and Hibernate modes. I bought the Ultimate Premium Deluxe version of Boy Child so that these modes would run at their highest efficiency, and up until this upgrade, they have run exquisitely. However, I am now experiencing multiple episodes of the Blue Scream of Death when I try to place the program into Hibernate or Sleep mode. Do you recommend allowing it to reboot on it’s own, or should I do a hard reset? Are there any plug-ins that can be run simultaneously to solve this problem, such as Benadryl 2.5, Melatonin 4.6, or Sledge Hammer 1.8?

Secondly, I read in the system specifications that Boy Child 2.5 is designed to run congruously with Potty Training 1.0. However, every time I click on the Big Boy Potty icon, the system develops a high-pitched hum, and I have to ctrl-alt-change-the-subject to silence it. Also, the Dry Overnight script has not self-activated, and it is my understanding that Potty Training 1.0 works best when this is functioning. Do you suggest that I wait to install Potty Training 1.0 until the release of Boy Child 3.0? Because I would really love that, even though I might get scoffed in the Motherboard User Forums.

Thirdly, I am severely underwhelmed with the amount of intake apps that are compatible with this version. Chicken Crush, Angry Fries, and Bad Gummies are pretty much the only ones that launch successfully. I get an unhandled exception when I try to install Soup With Friends, and a run time error when I attempt to open iMilk, regardless of whether it’s the lite or full version.

Next, I appreciate that some functions that were previously manually performed are now built into Boy Child 2.5, such as the Hand Washing Function, The Stairs Function, the Spoon and Fork Toolbar, The Fetch Stuff Function, and a very valuable built-in safety lock to keep the Eject Function from activating during a System Clean. However, it would really be great if you could build in automatic prompts for the Dress Function, Clean Up Function, and The Wipe Nose Function (without using the Sleeve Plug-In.)

Also, it would be amazing if you could add some system defaults to prevent unnecessary actions such as licking the ground in public places (or private, for that matter), throwing things down the stairs that are loud enough to sound like a small human and therefore cause a Motherboard Power Surge, and add a fear subroutine to disable the motor skills interface right before it attempts to dive out of a shopping cart.

In addition, I am highly impressed with the significant upgrade in Boy Child 2.5’s Word Processing skills. HOWEVER. This version seems to be hacking into every other program’s database and picking up key phrases and spitting them out at the most inopportune times. Is there any way to modify the dictionary to be a read-only list of words? Also, it seems like a coding error has caused an infinite loop that continues until the data request is satisfied, which causes a stack overflow on the Family Server. Could the next version simply enter it’s request at the command prompt and then wait for a response?

Also, Boy Child 2.5 doesn’t minimize well at all. It continues to clog up the Motherboard with constant pings when other programs are running in the foreground. I have found this to happen most often when running School K.5, Cooking 5.6, and Cleaning 8.9.

I’ve been surprised that considering Boy Child 2.5 runs on an MOS (Male Operating System), the performance of the program is significantly affected by the template chosen for that day. It runs best when in the template of pajamas, firetrucks, and cars. It hates any template consisting of overalls or solid colors. It would have been nice to know this limitation on the front side when I bought my templates for the year.

But I don’t mean to just complain – I wanted to compliment you on the mobile version of Boy Child 2.5 – it is infinitely better and actually enjoyable! It used to have a significant whine anytime I tried to run it, but it now performs flawlessly, and with the added bonus of a director’s commentary on all other passing traffic. I am also thrilled with the cross-program integration between Boy Child 2.5 and Girl Child 6.5. The seamless communication between these two versions is a work of art, and has caused a significant decrease in system-wide crashes. However, I do sometimes get concerned with how well they are integrated. If I didn’t know better, I’d think the two programs were capable of conspiring against me.

But of course, that’s silly talk.

Thank you for any help you can give me on the above issues.