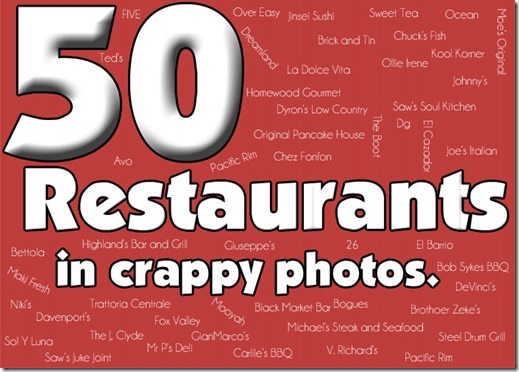 We usually eat out at least a couple of times a week (if not embarassingly more often) and due to an extreme preference for the atmosphere and the food, almost all of those meals are at local restaurants. Birmingham has an astoundingly robust local dining scene, so there are always plenty of options.

But although we’ve tried what we thought was nearly everywhere, we like what we like, and we often end up at the same several places. On any given Friday night, we can usually be found at either Nabeel’s, Silvertron, or Mudtown.

(During the Old-People-Dining-Hours – we have young children with early bedtimes.)

But then I had this fantastic idea. What if I committed to trying 50 new restaurants in a year? They would be mostly local with a few chains thrown in, and the only rule would be that I had never been to them.

It could be a blogging project! Beautiful pictures! Fun graphics! Pomp and Circumstance!

But I highly doubted that there were 50 restaurants in Birmingham in which I had never entered.

I started browsing through Urbanspoon and was shocked: making a list of 50 previously unvisited restaurants was done in five minutes. And it wouldn’t even have to include all of the nasty food groups for which I don’t care (sorry, Vietnamese, Thai, Indian, and Fried Giblets — it’s not you, it’s me.)

But then I had another setback: Properly blogging about such an adventure would have to include my giant camera. And good lighting. And people staring at me, wondering why I was photographing my food with such snootery.

And I hate being stared at.

But I still wanted to do my project, so I decided that I would just take crappy iPhone photos, and if it takes longer than a year, it would be okay. I won’t get accolades for my amazing journey and fantastic photographs and stellar moment-capturing sensibilities, but I wouldn’t have anyway. And I will have the experiences, and our palates will be increased, and maybe I’ll motivate a person or two to try the same journey in their city.

And 50 Restaurants in Crappy Photos was birthed.

I gleefully created a spreadsheet or prospects and sorted it by whether it was a Date or Family destination, price, location, and dining hours. Then we set out on our journey.

Here are our first three visits:

Saw’s was at the top of our list because it’s close by, casual enough to take children, and relatively inexpensive. It’s in the former location of Ore, which was American Idol winner Taylor Hicks’ first restaurant endeavor. Which in my opinion (and apparently everyone else’s, since it is now gone,) was significantly pricier than the quality deserved. So I suppose that Taylor got a clue and decided instead to invest with an already flourishing Birmingham brand, Saw’s (of Saw’s BBQ in Homewood and Saw’s Soul Kitchen in Avondale.)

And I am convinced it was the right move.

Technically a BBQ restaurant, they have a lot of unique foods and preparations, including whole-fried Okra with a special sauce, 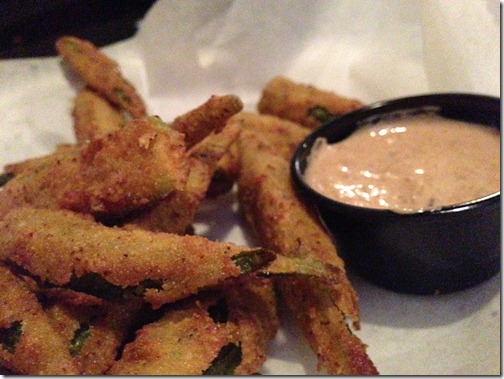 Stuffed BBQ jalapenos that are hotter than anything served to a Lady should be (and kept me from being able to talk for at least ten minutes,) 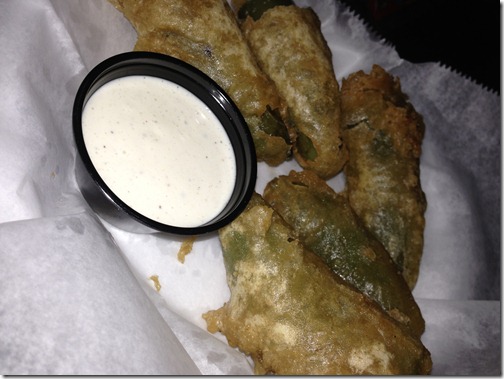 Random Specials like A Pork Belly sandwich that no Proper Lady would touch but my husband gushed over, 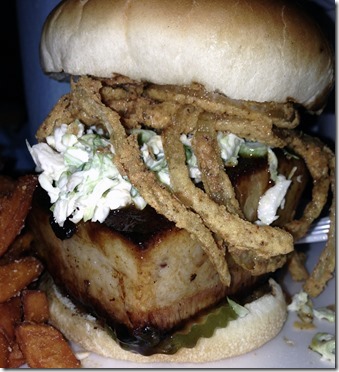 And a Sweet Tea Chicken Sandwich that is marinated in pickle juice and can be received with an enormous amount of my favorite side, sweet potato fries. 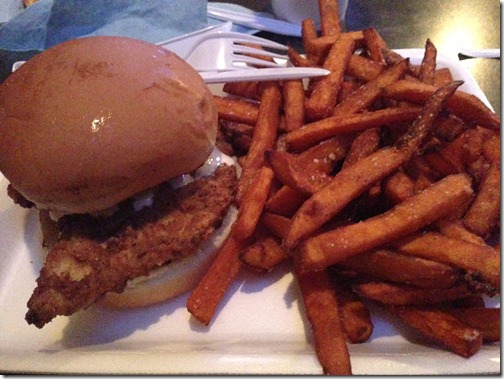 (I’m not a raving fan of pickle juice as a marination option, but that sandwich is pretty spectacular.)

Besides the unique stuff, they do a very good job on their main squeeze, BBQ. And we were back exactly a week after our first visit, and again a week after our second visit. This restaurant is definitely sabotaging our 50 Restaurants in Crappy Photos efforts.

We pass this tiny place all the time on our way to Nabeel’s, and have honestly had few thoughts regarding it. It’s off the road, unimposing, and it has a photo of Mona Lisa on the awning. 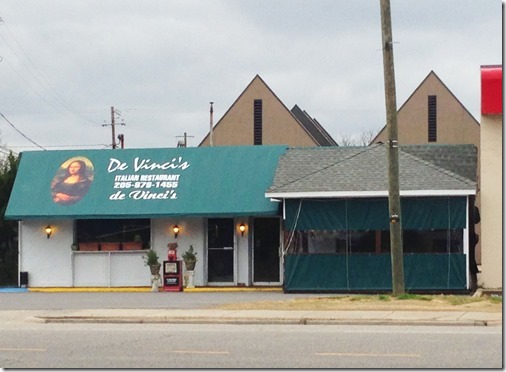 But we had heard good things about it, so we visited it on a night that we only had one kid in our care, since we didn’t know how anti-children the typical DeVinci’s/deVinci’s clientele would be.

It turned out to be much roomier on the inside than it appeared, in a shocking Mary-Poppin’s-Purse, Scooby’s-Doghouse sort of way. It had an established, local, homey feel to it, with mismatched 70’s tables and booths. Kids were obviously welcome, and the population was sparse.

The only thing that made me feel a little more than slightly squeamish is that evidence implied that they had a one-holer bathroom directly off of the main dining room.

(I did not go investigate whether indeed it was a one-holer, but it did seem to be so based on watching someone try to visit, but turn around and walk back to their table when the door appeared to be locked.)

(I just don’t want my pee listened to by other diners. Or vice versa.)

Luckily, we were far away said doorway, so we were safe. We ordered the baked feta appetizer, since we love Nabeel’s and Chez LuLu’s very different takes on similar dishes. We were shocked by how MUCH feta DeVinci’s granted us: 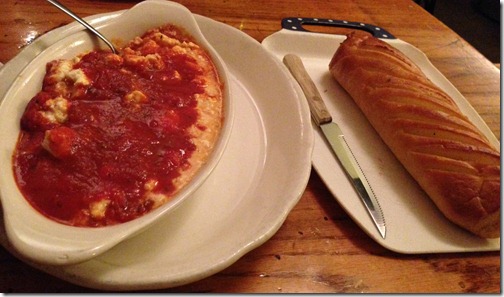 Yes, that is basically a bucket of feta, covered in what one could only presume is a homemade red sauce. And the bread was sliced thinly, with butter beneath every fold.

Noah was with us that night, and he currently holds the family title of Picky Eater. However, we somehow tricked him into trying the feta, and he ate at least half the bucket.

I searched the menu for something light to eat, and ended up on the spinach lasagna.

When it arrived, I recognized the extreme error of my ways. 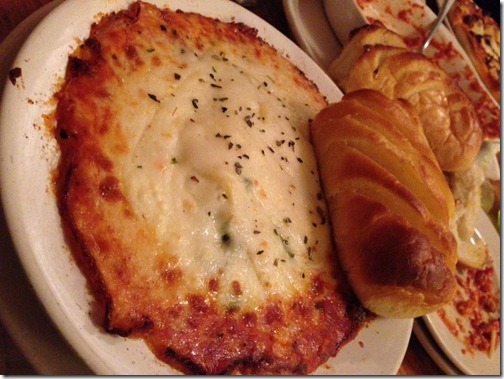 That cheese patty was at least a foot deep, and more cheese lay beneath. I didn’t get very far, because I can’t handle rich foods like I used to.

Chris got a personal sized pizza that made him very happy, and they were nice enough to serve Noah his spaghetti deconstructed, which made me very happy. 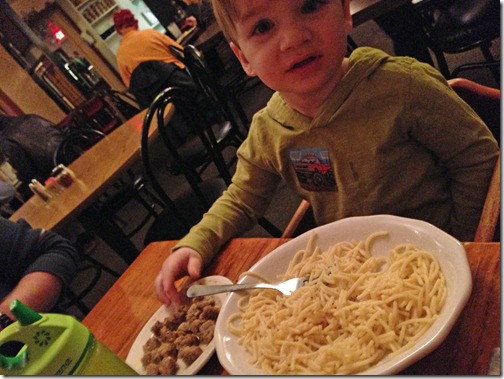 Chris and I had time for a really quick dinner alone a couple of weeks ago, so we headed down the road to another stop on our list.

I almost walked right back out, because it is apparently still legal to smoke in Otey’s (because it’s a tavern?) and I feared that I would have a flaming clown nose by the time we left. But the smoke seemed concentrated at the bar-end of the tavern, so we sat in the opposite corner and managed to keep my nasal passages relatively unscathed.

The menu was very much bar food, but did have a lot of variety. Chris had been dreaming about their cheesy-bacon-fries ever since he’d originally browsed their menu, so we started with those. 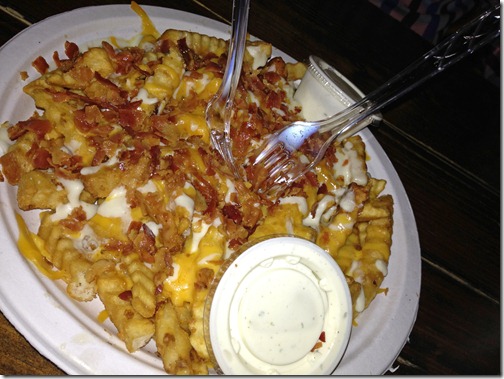 They made for a very happy husband, and I liked them fairly well, too. 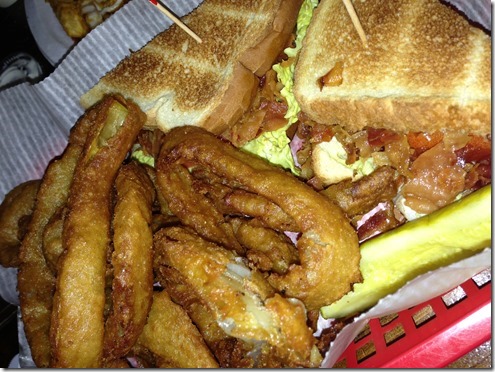 and I got a hamburger, which, although it deserved better, wins the award for crappiest photo of the post: 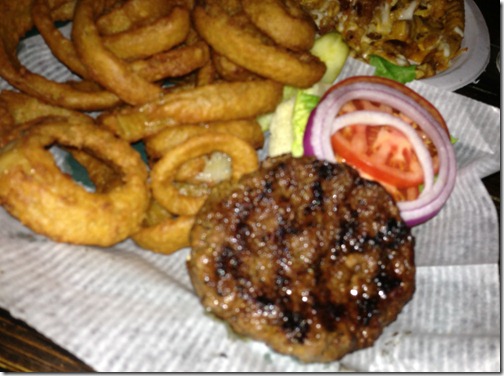 They followed through on the menu promise of crisp onions and a ripe tomato, two things that are very important to my burger experience. The burger itself was also very juicy, and made for good food.

And the winner of Round One is:

Saw’s Juke Joint, without a doubt. We’ve now been three times, and have loved everything we’ve ordered. And their menu has us constantly scheming about when we can get back for more.

Bonus Feature – A Most Unique Dish: from Mudtown.

So Mudtown can not begin to qualify for our 50 new restaurants since we’ve been going there for years, but I also want to share some of the most unique dishes in the city.

It will leave you at a loss for words. 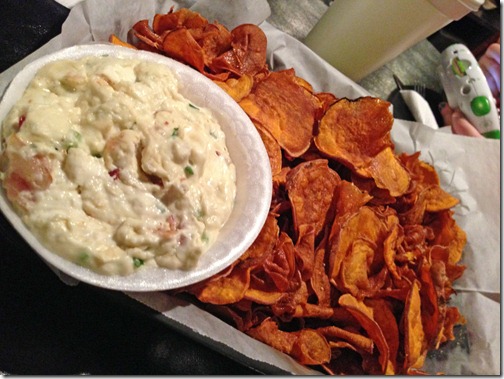 Let me clarify: I do not like Bleu Cheese. However, this dip has a secret: it’s actually mostly cream cheese. It just happens to have Bleu Cheese, Chives, and Bacon in it for flavoring. And it is pretty much the best thing that you will ever put on a sweet potato chip.

Hungry now? Then go somewhere new tonight. Then come back and tell me about it.

26 thoughts on “50 Restaurants in Crappy Photos: Round One.”