Hey there – I miss you guys.

I mean, I’ve kind of been here, but really it’s just an illusion. I’ve not *really* been here.

Where I’ve really been is staring at dozens of people’s butts, all day every day.

And when I’m not doing that, I’m answering Facebook messages, tweets, emails, texts, and phone calls regarding butt appointments.

It’s a bit overwhelming. And I really want to get back to being here – because I like y’all better than butts.

Also, because of these rare circumstances, I have been breaking my own rules and visiting the Post Office. With two small children.

Also known as the Sixty-Seventh Ring of Hell.

Maybe I need to find a new post office or better yet figure out how to print my own postage and get home pickups, but my local branch moves slower than a Hardees drive-thru. And I’ve only eaten Hardees like five times in my life, but those five times added up to a year of my life.

So Monday, I had one large box and five envelopes full of jeans that had to be mailed. I had pre-filled out all of my shipping labels and affixed them to the packages before I left the house – except for the box, because I was hoping to find a smaller box in the PO stash.

I did not, so I went to the long counter that paralleled the line and began taping up my remaining box.

Let me clarify: at my post office, there’s a work counter out of the line, and a really long work counter that runs alongside the line. If there are already people in line, I always do my work at the long counter while in line to prevent being jumped. That’s what the counter is there for, right?

There were six people in line. I let Noah loose for half a second so that I could use the tape dispenser, and he took off, yelling happily all the way. He and Ali spread through that post office faster than e.Coli at Chuck E. Cheese. They bounced off the walls, ran into poles, and got dangerously close to the open door. So I stopped, chased, and scooped an unhappy Noah up, and told Ali to stand next to me.

Which meant that I was then stuck with the task of trying to get packing tape off of the tape dispenser with one hand while Noah was squirming mercilessly in my arms and saying “down, down, DOWN!!” and Ali was holding onto my leg and asking me never ending questions about the inner workings of the post office.

It was not for moments like this that I became a parent.

As my shoulder was being pulled out of socket and my leg was being hugged with a with knocking-off-balance force and the packing tape would not come off the roll without sticking to itself (WHY does tape have to DO THAT?!?! We can send robots to Mars but we can’t make tape that doesn’t stick to itself??), a very able-bodied 60ish-year-old woman walked into the post office and got in line – in the small space between me and the guy in front of me.

How could she not think I’m in line?

I mean, sure. I’m sealing up my package. But what else is this counter for?? This isn’t like a restaurant that won’t put you on the list until your whole party has arrived. This is the world’s slowest post office line. Have mercy, woman!! Did you never have small children??

As I was staring, Noah was beating (lovingly?) upon my chest demanding freedom and Ali was tugging and questioning with the rapidity of a semiautomatic weapon in a voice loud enough that Linebreaker Lucy turned around, looked at me sympathetically, and said,

And it was at that moment that I wished I weren’t so southern.

I fumingly went back to one-handedly ripping packing tape off of the tape dispenser, but the anger lobe of my brain had grown seven sizes that day, which caused it to push into my hand-eye coordination lobe, and my finger met the very sharp, very industrial strength teeth of the dispenser.

I thought it was just a flesh wound, until I noticed that I was bleeding all over the packing tape.

(Which, incidentally, helps it not stick to itself.)

I gave up on the tape and used my one free arm to reach across Noah and feverishly search my purse for any type of sopping item, and right before I got desperate enough to affix a feminine product to my index finger, I found a used napkin.

I wrapped my hacked-up self and carried on in my packaging attempts.

Not a single person had been successfully helped and dismissed from the Post Office since I had entered, and there were now at least four more people behind me, all simultaneously emoting sympathy for me and oohing over how cute Noah was, as he tried all of his begging strategies to escape my grip.

Finally, Linebreaker Lucy got her turn at the counter.

She had four letters in her hand to mail – letters that had already been stamped. But she had come to chat with the counter employee.

“Hi there! How are you today? I’m great. You see, my friend Susan just had pelvic surgery, so I wanted to send her a get-well card. But all I had here were these old 20 cent stamps, so you see I put a bunch on it. Do you think that this will be enough postage to get the card to Susan?”

“Yes ma’am, that will be more than enough.”

But yet. She stood there chatting for at least five more minutes, past the time that the other employee became free and I began the tedious process of moving my six packages from counter to counter. I needed use of two arms, so I put Noah down and told Ali to watch him.

He took off in a blinding sprint, so she did what any responsible sister would do: she grabbed him by the back of the collar.

“You told me to keep him from running away.”

I picked him back up and began the fight to keep him from hitting the cancel button while I ran my transaction.

I finally left, finger still in napkin tourniquet, feeling beaten and bruised, and a perhaps just a little sinful in my heart toward Linebreaker Lucy.

And, five days later, I still have deep finger fish scales as proof that it wasn’t all just a figment of my imagination. 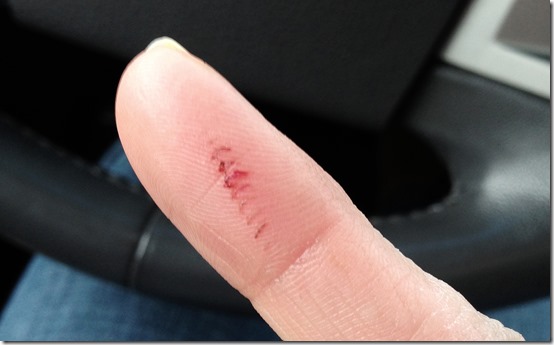