4. The following conversation with Ali:

“Mommy, you know what really disappoints me about the new Tinkerbell movie?”

“Well, the other fairies – Fawn and Rosetta and all – call Periwinkle Periwinkle before they even know her name.”

“Oh.  That is a serious continuity issue!”

(I have not confirmed whether she is right or wrong in her accusations, but the fact that she is attentive to continuity issues warms my soul.)

3.  Teaching Noah to repeat anything.

At the end of 2012, I shared on my Facebook Page what he must say to persuade me to fulfill any and all requests:

And at the beginning of 2013, I decided to increase his levels of motherly affirmation: 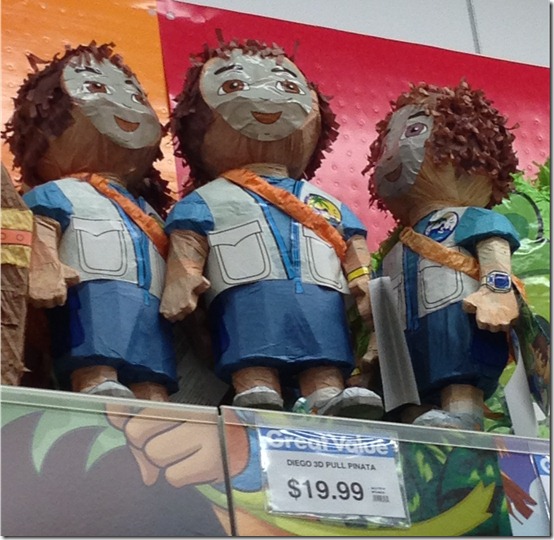 I used to have a queasy feeling about beating the face off of beloved cartoon characters.  But if I ever meet one like him, I will have no problem attacking – before he attacks me.

1.  The following scene at Chick-Fil-A, during primetime lunch:

A Tiny Very Elderly Lady was sitting across from us.  She had two young boys with her.

Several times, she waved down a Chick-Fil-A worker – a young guy – to fetch her various items.

“My Pleasure,” he said over and over.

As she got up to leave, he was coming down the aisle, hands full of items for other patrons.

She pulled out a tip (are you allowed to tip Chick-Fil-A employees??) and motioned it toward him.  He gestured that his hands were completely full and to not worry about it.

So the Tiny Very Elderly Lady reached across him and stuffed the money in his pants pocket.

He smiled at her.

She looked over at me, shot me a bashful grin, and then giggled like a schoolgirl.

He looked over at me, assumed a value-sized look of mortification, and shrugged his shoulders.

Then Tiny Very Elderly Lady floated out of the store with a giant smile on her face, quite pleased with her ability to turn a mundane day at Chick-Fil-A into something a little too special.