Today I have a guest post by one of my good blogging friends, Abbie.  She left The World’s Longest Comment on one of my blog posts last year, and I immediately deleted it and told her she would have to guest blog it instead.  And so she did – but in the in between, she birthed two more humans.  Be sure to visit Abbie’s blog – it’s a fun whirlwind of various subjects, constantly keeping me curious as to the obvious fact that she’s figured out how to make her days 42 hours long.

Hi there, guys! I’m Abbie from Five days…5 ways, and it’s such a treat to be here because I pretty much love Rachel’s blog.  Oh yeah, and Rachel too, which totally makes sense, seeing as how she’s the one writing the blog and all, right? Right.

So, thanks for having me by, Rachel! And for being my cyber-friend. If we ever meet in real life, I promise to wear the most atrocious pair of Mom jeans I can rustle up just for you.

Hmmm…what do y’all need to know about me (other than that I am, obviously, a Southerner)? Well, first up, apparently, I’m overly fond of the number “5,” because, in addition to making it my blog theme, I also made it the number of kids I have back in September when I gave birth to identical twin baby girls. You can read about their (home!) birth story if that kind of thing interests you (I promise it’s light on the blood and guts). 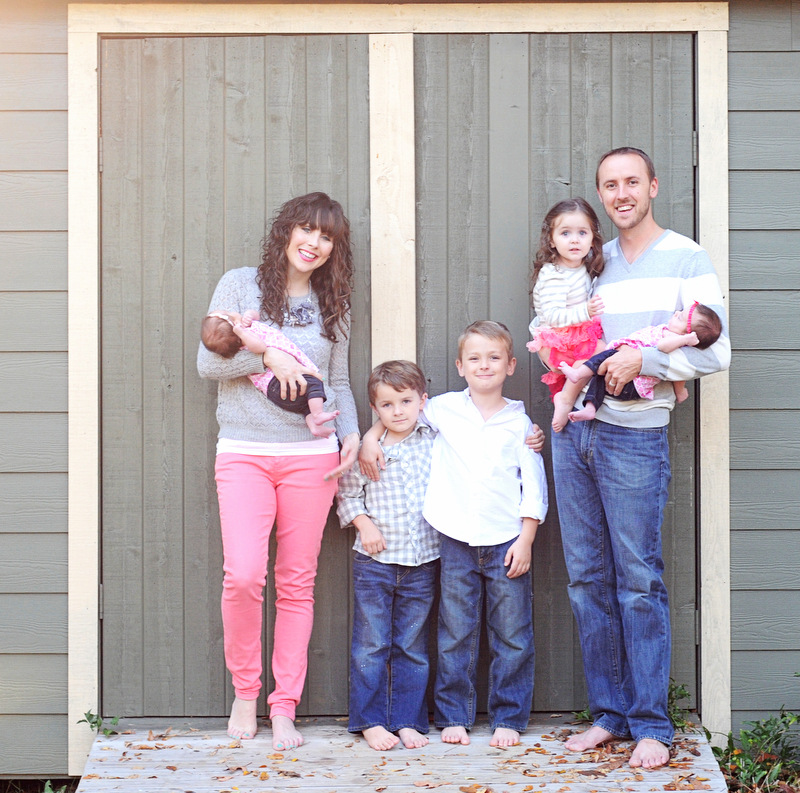 Here we all are looking entirely too photogenic and happy for the mayhem I’m sure had taken place only moments before this shot was taken (see my left hand there? I look like I’m trying to throw gang signs, but I’m guessing it’s actually on the downswing from a child’s wardrobe adjustment and/or ear-pinch). You can see more of our family photo shoots here and here if that sort of thing interests you.

Umm…what else? Well, I blog about a little bit of everything at Five days…5 ways—each day even has a theme: Move-it Monday: Fitness and projects, Try-it Tuesday: Tutorials, Wardrobe Wednesday: Fashion…and so on.

But of the many and varied topics I have blogged about, there has been one glaring omission…especially considering that, with 5 kids under 7, 3 of whom are in diapers, it’s a pretty important component of my daily life.

What is this unblogged-about subject, you ask?

Yes, you read that right. And, since you are Rachel’s readers, I doubt you even flinched.

After all, Rachel has regaled us several times over with tales of Noah’s floaters and Ali’s flushing misadventures, so I thought I would take advantage of an audience primed for potty talk and air my (toddler’s) dirty laundry at last.

It’s a post that is sure to earn me a spot in the Mommy Hall of Infamy, but it’s just too terrible good to remain untold.

Before I go any further, you need to know that my firstborn willingly constipated himself for an entire year. We got the brilliant idea to jumpstart his potty-training starting immediately after his 2nd birthday, and being novice parents, we jumped in with enthusiasm and verve.

At first, he was interested…surprisingly successful even…until the day he woke up and decided he was terrified of pooping—a fear which transformed my formerly smiley toddler into a howling, thrashing terror of a child until one week after his third birthday when he woke up one morning and decided that pooping was a good idea. He even started smiling again.

Not too surprisingly, that was one of the least enjoyable years of my life. And yet, on the day of the events which I am about to narrate, I would have given almost anything to trade the reeking fourteen-month-old child I had with me with the irascible constipated two-year-old to come. 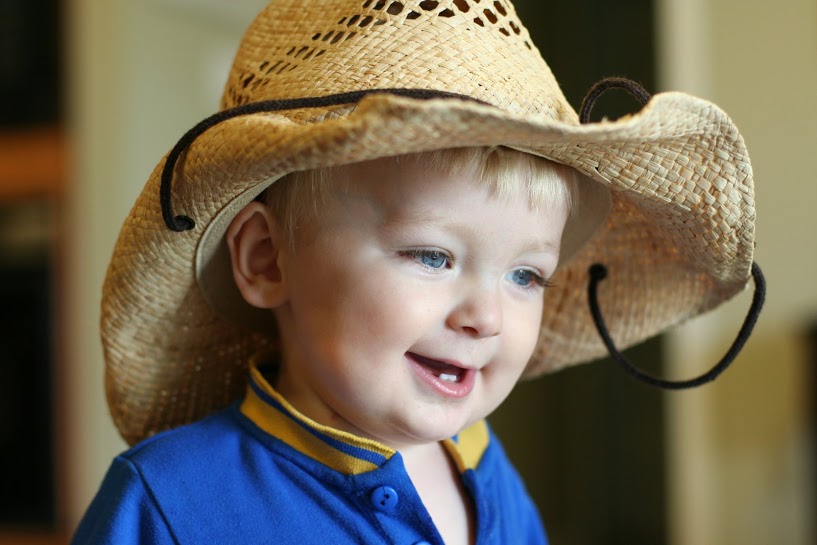 It all started on a fateful trip to Albertson’s one soupy Friday afternoon. I was 4-months-pregnant with #2, which meant that Ezra was my only shopping companion (oh, to grocery shop with only one child again; them were the days).

Our trip had been mercifully uneventful as Ezra sat in the basket (not the little seat in the front but the actual grocery-holding part) and zoomed boxes of cereal through the air while making the appropriate motor-noises that cereal box airplanes tend to.

Now, I’m not a big fan of the self-checkout lane since I have an uncanny ability to make it repeat, “Please place item in the bagging area,” until I would be happy if the earth swallowed me whole just so I wouldn’t have to hear it again.  But I still chose that route because I’d been detecting a particularly malodorous fragrance wafting from somewhere in Ezra’s general direction, and it was getting stronger with every moment. And I wasn’t keen to subject anyone else to his stench.

We made it through the transaction with only 14 or so “bagging area” warnings, but just as l was pulling my card out of my wallet to swipe it, Ezra stood up in the basket. Like any good mother, I said, “No, no, sweetie. You have to sit on your bottu…” but before I could even finish my sentence Ezra had overbalanced himself against the side of the cart and was flipping over the edge.

I grabbed at every appendage and clothing scrap as he fell in an agony of slow-motion flailing arms and legs, but I missed every single one until I caught the very tail of his shirt about six inches before the ground, which, I guess, counted for something. He had still managed to smack himself pretty well, though.

I pulled him up and squeezed him close as he screeched his agony to the four corners of the earth (even his loving grandparents admit that they have never heard a louder child when he really gets going).

As I clamped him against my chest, desperately trying to simultaneously comfort him and shush his wails, I could barely stand the waves of putrid scent that kept assaulting my nose. I told myself it was so strong because I was holding him so close to me, which turned out to be fairly accurate as I glanced down and realized that the arm applying the vice grip that was preventing Ezra from yet again attempting a dive to his death was covered in a chili-like substance.

I then surveyed my (white) shirt and noticed more brownish smears all over my pregnant belly.

I looked around me, and to my horror, observed several other manifestations of the goop—.on the floor, on a plastic Albertson’s bag…

After that, I stopped looking.

I noticed a janitor mopping his way toward me and completely panicked.  I decided to run for it,  but the moment I did, a torrential downpour began to pelt the roof with sheets of rain.

I froze, unable to hear my own thoughts above Ezra’s screeching, the drum of the rain, and the pounding of my heart.

And that’s when the world’s mostly stubbornly kind old lady decided she would walk me to the car with her umbrella or die trying. After finally realizing that resistance was futile, I caved and followed her, head bowed, covered in poo, with my groceries on one arm, and my still-screaming toddler in the other—the very picture of failed motherhood.

As my good Samaritan waited with grim determination to follow her noble deed through to the bitter end, I rooted around in my car until I a found towel to use to at least partially shield Ezra’s car seat from the brown stuff oozing up his back.  I was so desperate to be left alone that I pretend-buckled him in, thanked the lady profusely, and then waited in the rain while she reluctantly walked away, casting repeat, “Poor, incompetent little thing” glances over her shoulder.

I dove back inside the (steaming hot and sickeningly rank-smelling) car and attempted to get Ezra’s screaming, writhing little body buckled for real.

But the towel was too bulky to allow for proper bucklage, so I wedged as much of him under the straps as I could, managed to get the chest piece plus one buckle done, and swore to myself to drive as slowly as a grandma turtle all the way home.

About 15 minutes into the 1/2 hour trip, Ezra was still wailing, and I was periodically halfway dislocating my shoulder reaching behind me to console him.

And then I saw cop car do a U-IE just as I drove by.

I glanced at my speedometer.

Suddenly my mind was blank.

I could have sworn the speed limit was 55. But what if it was actually 40, and this copper was going to nail me, not only for going 13 miles over the speed limit but also for improper buckling of my toddler and leaving an unsanitary mess on the Albertson’s checkout line floor?

I’m almost too ashamed to admit it now, but I actually pulled into a bank driveway to “hide,” hoping he hadn’t turned around in time to see me do it.  And I stayed there, trying to calm Ezra down and biting my fingernails for five full minutes until I was sure he wasn’t coming.

Then, I eased back on the road and drove home at a crippled snail’s pace, completely paranoid that he had called for back-up and was waiting to pop out of the next County Road with a whole blockade of squad-cars.

After what seemed like an another hour, I pulled into our garage and hauled Ezra’s (finally quiet) body out of the seat, stripped off his gooey clothes, and plunked him in a bath full of soapy bubbles. It was only then that I realized all the clean washcloths and towels were in the laundry room, which was 40 feet down the hallway.

I had never left my child in the bath alone for more than 3 seconds before, but I told myself if I *sprinted* down the hall and back, it would be fine.

I did just that and before I had even made it halfway back, Ezra had, for the first time in his short life, managed to completely lose his balance in the water, submerging his head and leaving him flailing and wild as he alternately surfaced for air and then redunked himself.

I did finally manage to get him calm and dry and get both of us in bed for one of the most desperately-needed naps of our lives, but I tell you this: I have never gone back through that Albertson’s self-checkout line again.

I would warn any possible local readers about which line to avoid, but that particular Albertson’s closed down not too long ago. I never heard the details of why, but if I ever hear anything about health-code violations on Checkout Lane #7, I’m going back to my bank-line hideout.

And there you have it, folks.

The poop episode that put a grocery store out of business. Does it get any more epic? I think not.

Thanks so much, guys, for allowing me to finally blog about a topic that most people never get to (more’s the pity)! It’s been a pleasure, and I hope you’ll stop by to check out the many less smelly shenanigans we get up to over on the blog.