There are certain unwritten rules of our parenting. We all have them. Yours might not be the same as ours, but you definitely have them.

No caffeine for babies.

(Except for small, unavoidable doses of coffee.)

And no baby leashes.

You’ve seen it at the mall. Small children tethered to their parents with dog leashes, their heads hung low, their faces filled with shame, their freedom restricted with a soul-killing communist harness.

We have laughed at and we have sympathized with these poor child prisoners, united in our ideal of liberty and freedom for all – even toddlers.

But self-righteousness can feel like an airbag deploying in your face when it has a front-end collision with hypocrisy.

So Noah is going through a phase.

A phase of stunning speed, in which he can seemingly move from one location to another while still being in the last location.

To achieve these inhuman levels of speed, he has apparently discovered how to divert all energy from his brain, eyes, and ears into his legs, therefore making those legs unstoppable.

This superpower had me quite worried all week for what was to be his first Alabama Football game on Saturday.

Not the game, necessarily – but the tailgating.

Next to a busy road.

With 100K+ people blazing by in all of their various crimson automobiles, houndstooth golf carts, and motorized coolers.

(I’m not kidding about that last one

So I had The Talk with Chris.

“I’m really panicked about taking Noah to Tuscaloosa.  You know how fast he is…and how he’s not exactly voice-controlled.”

Relieved, I rested in the fact that perhaps we’d just go to the game and skip tailgating.  Or some other fabulous fix.

A few days later, Chris informed me of his solution with excitement and gusto.

He said he preferred to be called a “Harness Hero.”

Even though he knew in his heart that the more accurate term would be a Leash Loser.

Gameday came.  We were about to go on a walk around campus when Chris pulled IT out.

The poor child had no idea what was happening to him, as one would who had only experienced freedom and had no frame of reference for cruel imprisonment. 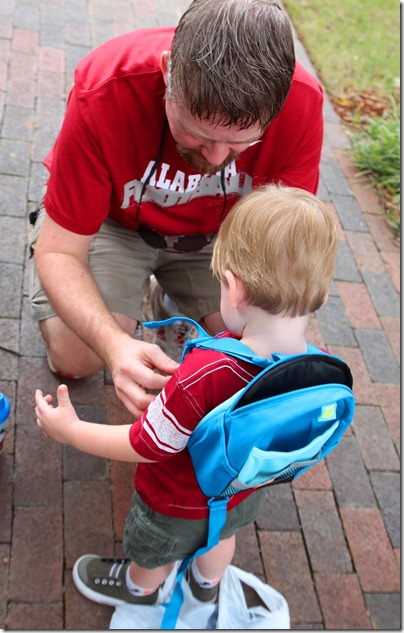 He made a final break for freedom, 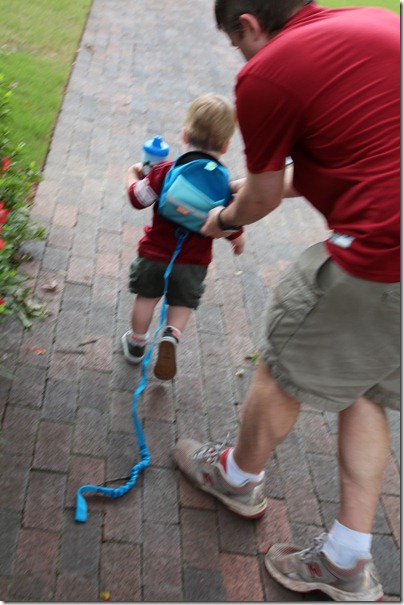 as he drug Chris behind him, who was still hooking up the final preparations. 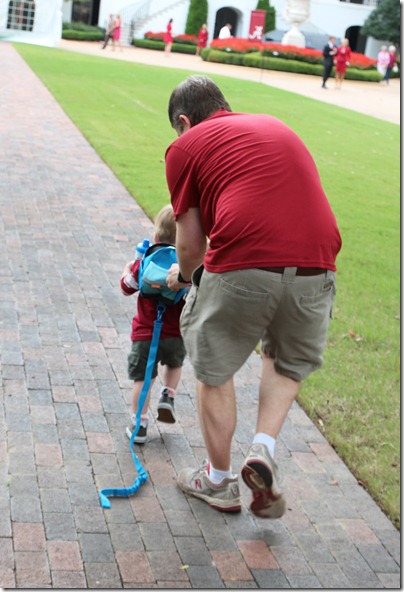 But it was too late.  With a yank, 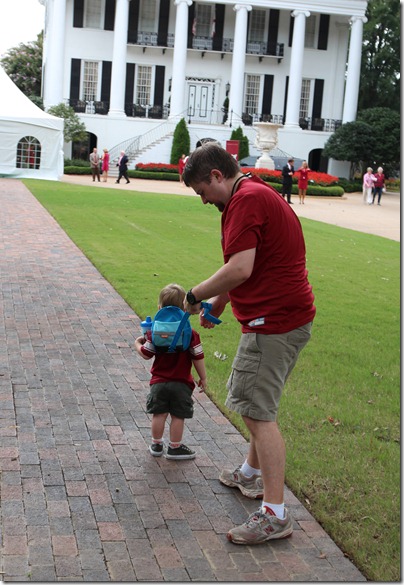 Noah admitted defeat.  His spirit was crushed, and he acquiesced to his incarceration. 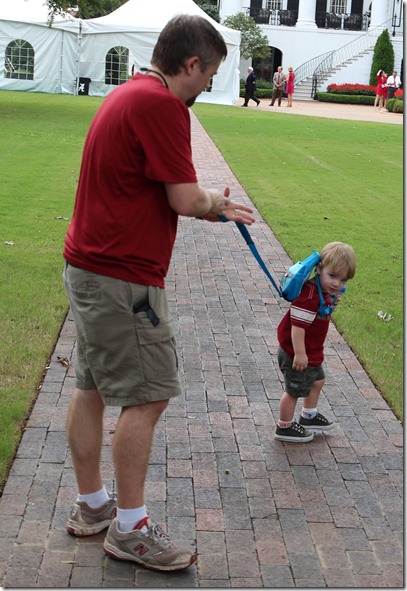 But then he realized: he was in charge.  Of the speed, of the direction, of the…everything. 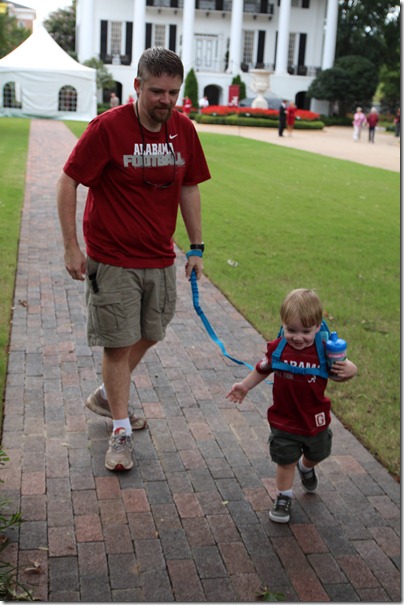 And he gloated in his dominion. 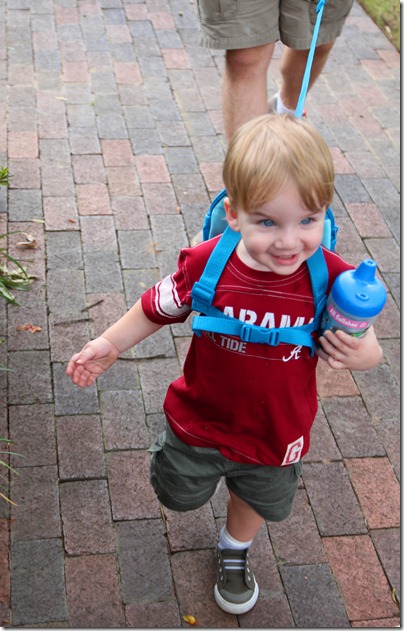 He could slow to the pace of a turtle, and act aloof as his father questioned his sudden apathy to speed. 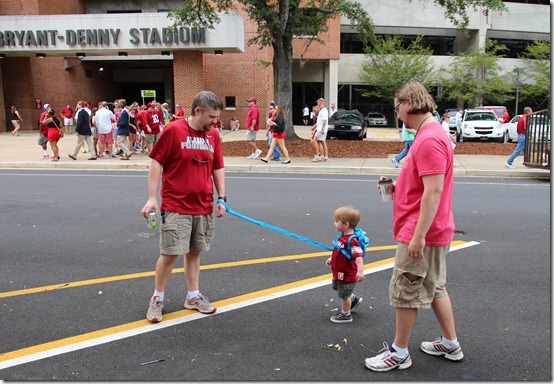 He could stop and ponder his toes if he so felt the desire, and with a yank, Daddy would be the one pulled backwards. 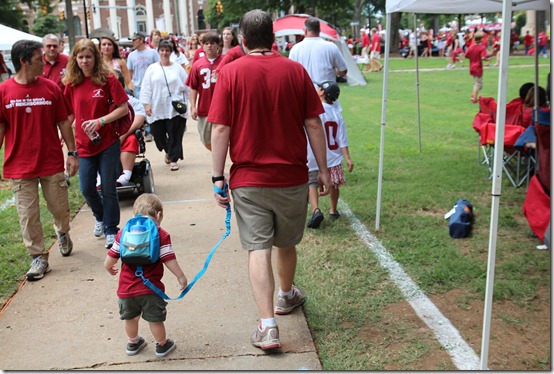 (Notice the look of pity and derision on the faces of the oncoming crowd.  I am intimately acquainted with that expression.)

But despite his control, he still felt the burn, and begged for a Mommy Intervention. 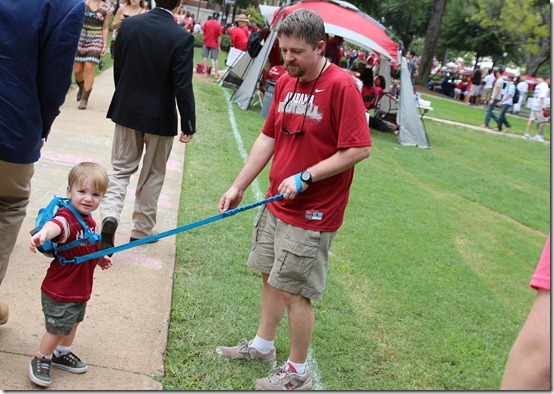 He regained his freedom when we returned from our walk to our tailgating spot, thanks to a strategic chair blockade. 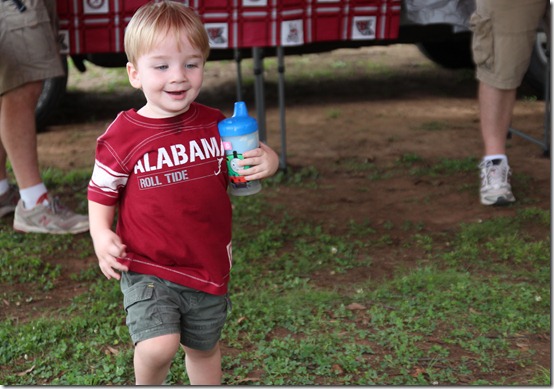 But the damage was done.  The ruse of equality between man and child had been broken.  And he pondered these things deeply in his heart. 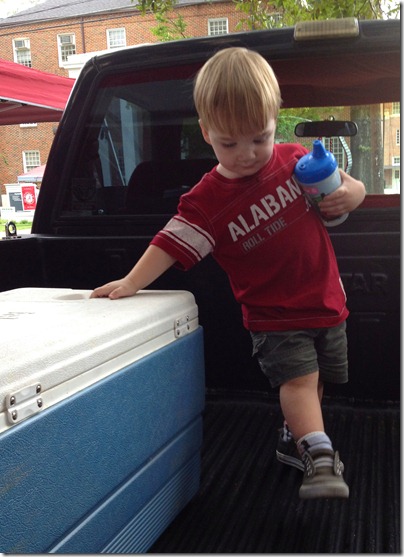 For the rest of the day, he made sure that the photographic evidence of his tarnished worldview would crush his parent’s soul with guilt for decades to come. 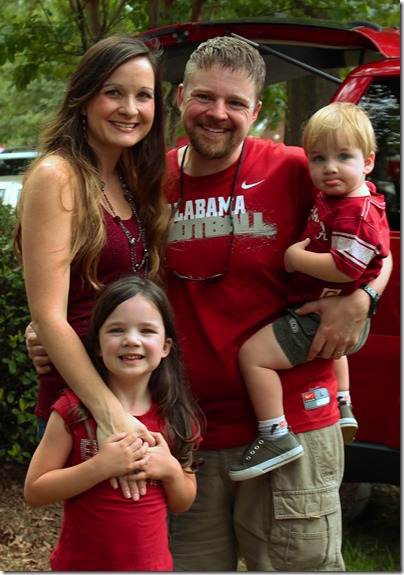 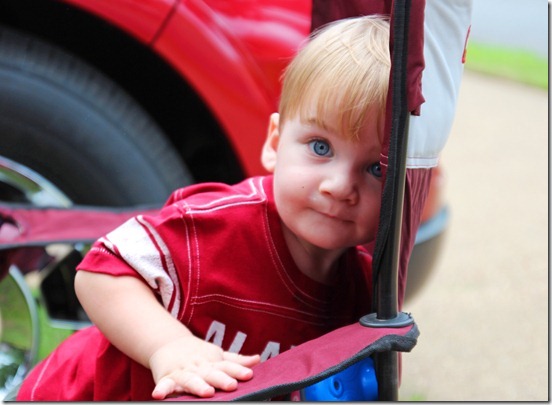 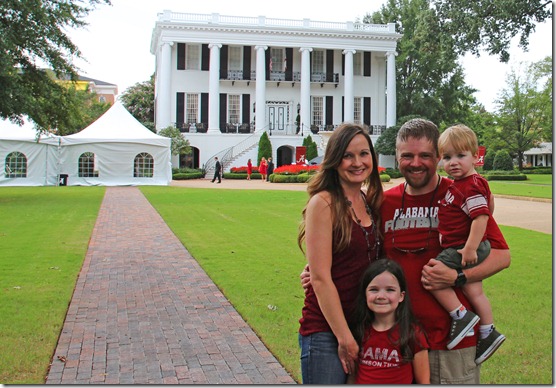 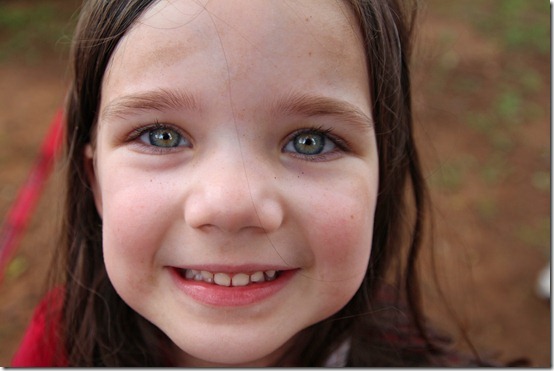 …one child that still has a whole soul. 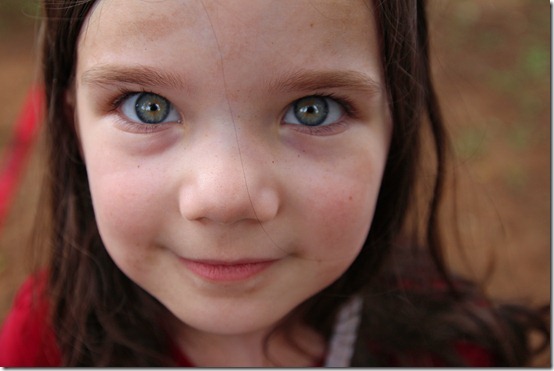 We re-harnessed for the walk to the stadium, then removed the leash but left the backpack for the actual game.  The now-tired child (missing his first nap ever) continued to give us looks that could melt the ice-cold heart of Prince Humperdinck. 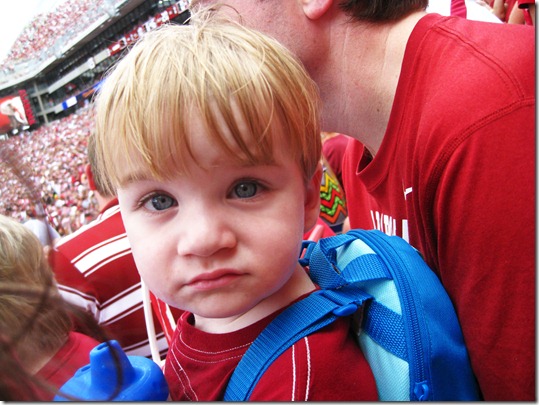 …and he was completely oblivious that he was experiencing the first football game of the rest of his life. 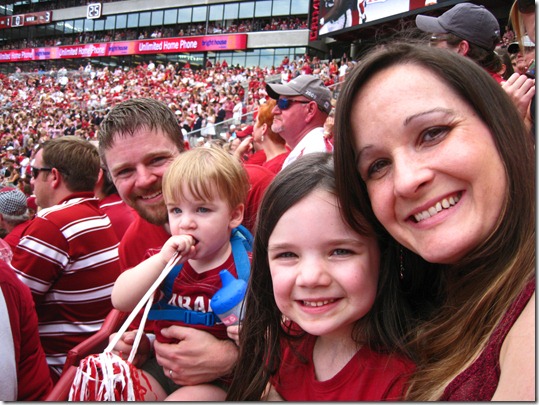 We tried to explain to him… “Look around you, son! More people than you’ve ever seen in your entire existence!!  Do you want to get lost in a place like this?  No!” 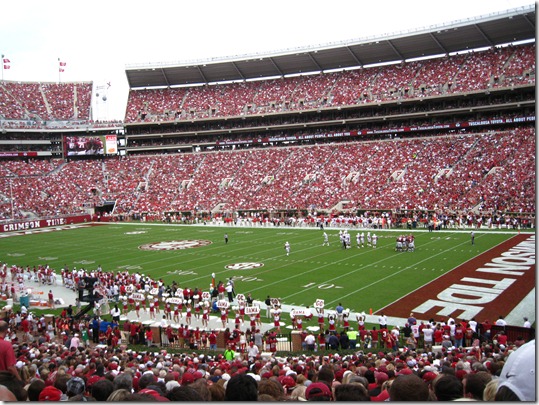 …but he silently played with his car, so not buying it. 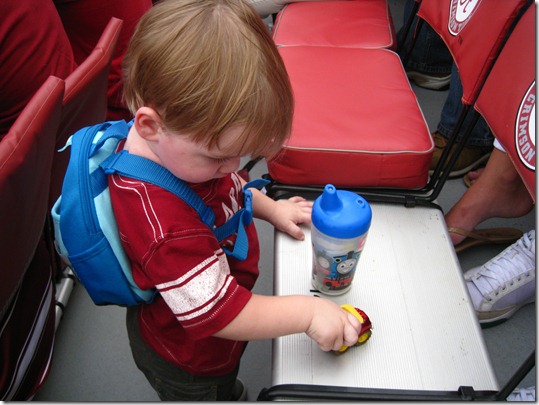 Meanwhile, Ali was having a splendid time, destroying her shaker and gathering up the pieces. 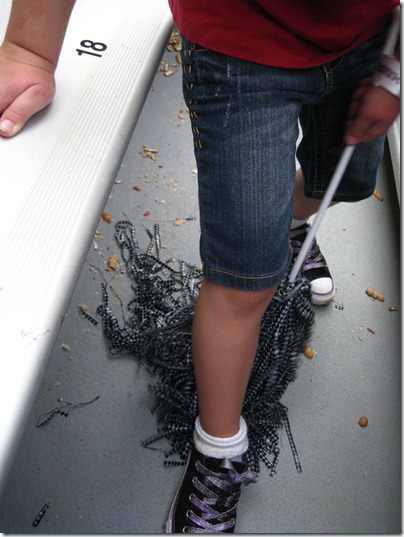 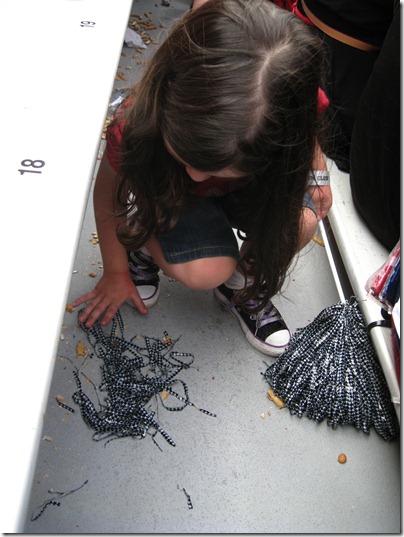 (And trying to block out the Touchdown Cacophany.) 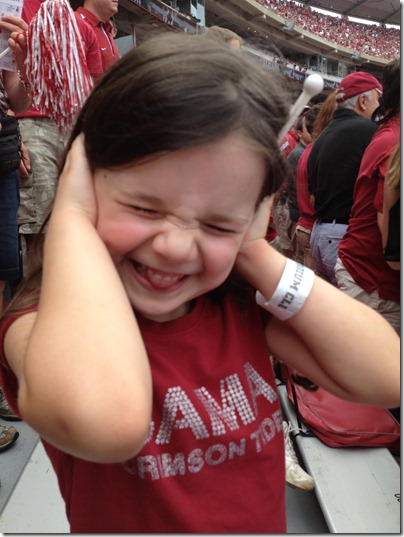 Yet Noah continued to ignore us all, silently playing with his car. 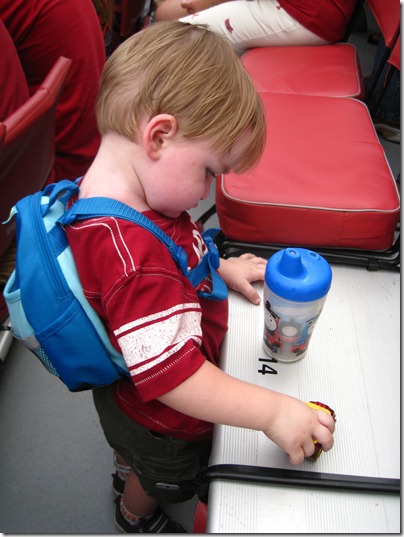 He did take a small break and focused his attention on the field for the most important part of the game – halftime. 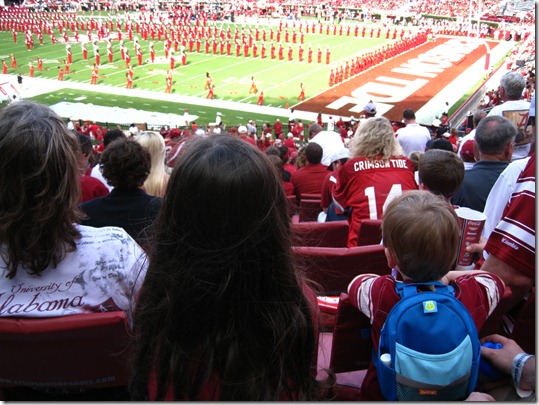 And then we left, with one exhausted boy, 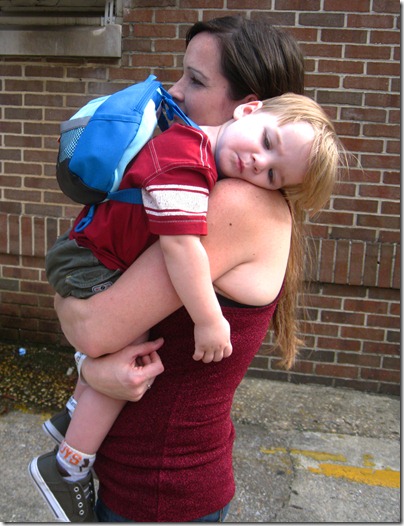 and one excited (and gloatingly unharnessed) girl. 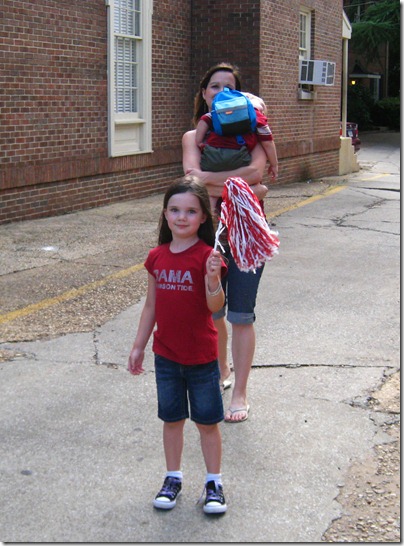 So forgive us.  Not for breaking our son like a horse.  But for judging you, if you felt the icy stare of our eyes at the zoo or the mall for your own utilitarian toddler traps.

We are leash losers.  Join us if you need to.  Judge us if you must.  We understand either way. 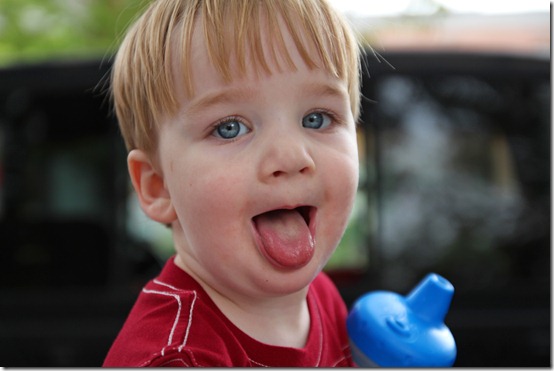 Well, some of us do.

60 thoughts on “The Power of Restraint.”