So Chris went to Dallas last weekend for the Alabama/Michigan game.

(I know, right?? Why do Alabama and Michigan need to meet in TEXAS??  And men say that women are the illogical ones…)

He was gone the entire long weekend – from Friday morning to Monday afternoon.

Which, if anyone’s counting, is four days and three nights.

And no – I didn’t mention that fact here, on Twitter, or on Facebook while it was happening, because I was having to fight off enough imaginary masked murderers without worrying about the ones staked out on Twitter waiting for someone to announce that they’re home alone.

(And, as I laid in bed and plotted my overthrowing of Evil Intruders, I realized all that I had available to knock them down the stairs with a fabulously fatal blow was a plunger.  And try as I might, I couldn’t convince myself that I could get the right angle to do what I needed to do with that particular tool.  And plus, what if their face got stuck in the plunge-end and they didn’t fall as they needed to?  So I told Chris it was time to advance our household weaponry – if for no other reason than for the quelling of my violent imaginations.  He jumped at the idea.)

So.  Home Alone.  This is not something I do often (ever).  In fact, before last weekend, I don’t think I’ve been home alone for more than two nights total since I had Ali, and zero nights since I had Noah.

I know, I know – some of you have husbands that travel all the time.  Or you are single Moms.  Let me just say: You are superwomen.  And I am not.

Chris knows that I am not a superwoman, so he unfortunately felt a lot of guilt – over leaving the kids with such an ill-prepared Woman Of The House. 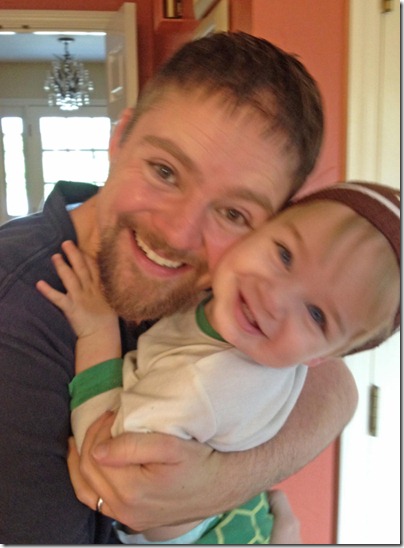 So he did what any guilt-ridden Dad does before departing:  he made them cinnamon rolls.  With sprinkles. 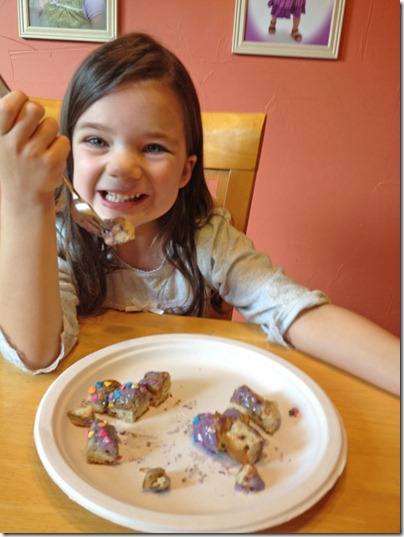 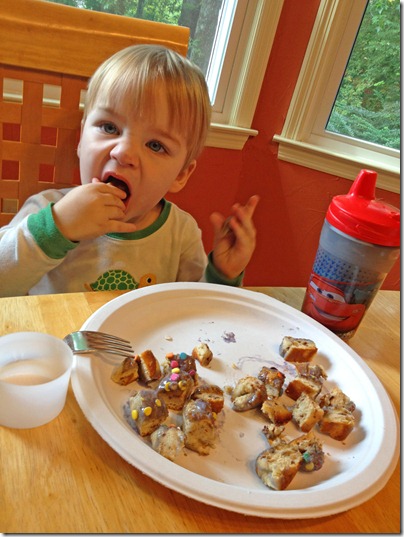 An hour after he left, Noah was running in circles, completely unable to stop, cheering at the top of his lungs for Daddy, The Valiant Provider of Sweetened Pastries Out Of A Can.

The Side Effects of Guilt are quite severe for those left behind.

But overall, I did much better than I thought, and learned a few things about how I do life differently when Chris is not around.

For one, I drive aimlessly.  Often.

Much like Abby and Brittany (which we’re totally obsessed with, by the way), when there’s two of us, we have to discuss where we’re going before we leave (or at least before we’re out of the neighborhood).  But when it was just me, I found myself not deciding where we were headed until a good half hour into our journey.

(But let’s go back to Abby and Brittany for a minute.  Are you watching this show??  There are so many questions posed by the concept of having two heads with one body! Like, shouldn’t they get two salaries?  But should they have to pay for two plane tickets?  Speaking of tickets, if they get a speeding ticket, onto whose driving record would it go?  And THEN there’s vast quantity of marriage questions.  Chris and I have spent many a night of extended pillow talk pondering these difficult and disquieting issues.)

Back to driving endlessly.  Despite the slightly increased fuel costs, it did turn into a few unexpected beautiful moments.  Such as this one, where we got Mommy a frozen coffee, the kids dinner, and then happened to take a walk down this delightful trail: 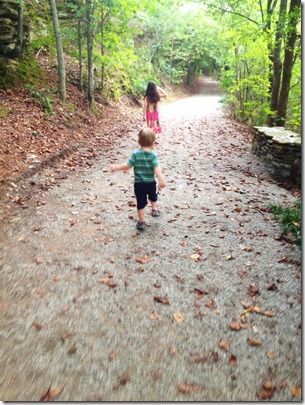 I found a park bench and sat, while the kids ran laps around me, getting bites of dinner as they passed by.  Noah eventually managed to swipe my frozen coffee, which made the laps even more ferocious. 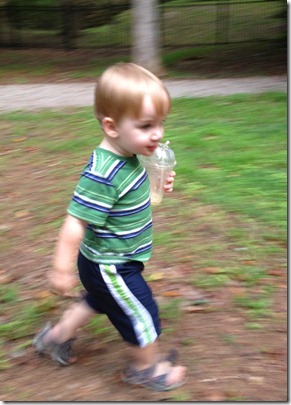 (Speaking of coffee – if you ever want to feel discriminated against as a mother, walk into a quiet coffee shop with two small children.  And take special note of all of the patron’s swiftly falling countenances.  You will feel the chill of  The White Witch come over the place immediately, and will experience uncontrollable urges to shout, “I’m getting it TO GO, people.  I promise to only ruin your child-free ambiance for a few small moments.  Take a sip of coffee and CALM DOWN.”)

Except for the excess coffee purchases, we also tend to eat out a lot less when Daddy’s out of town.

But lucky for them, Mommy shares the win-them-over-with-sweets mentality of Daddy, and when they look a bit grumpy… 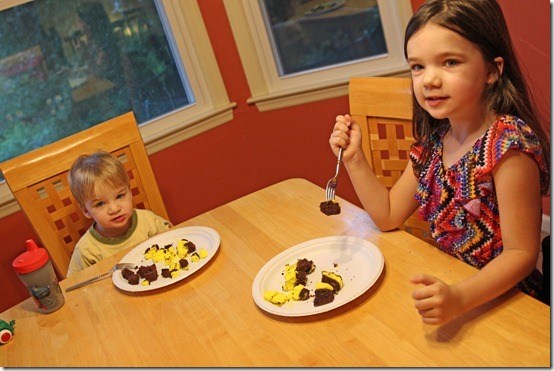 They get cupcakes for breakfast. 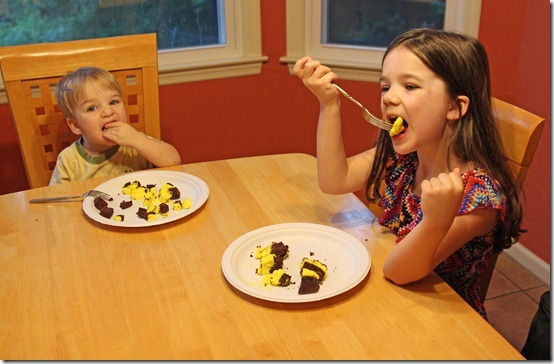 (I think we might need an in-home visit from a nutritionist.  Any volunteers?) 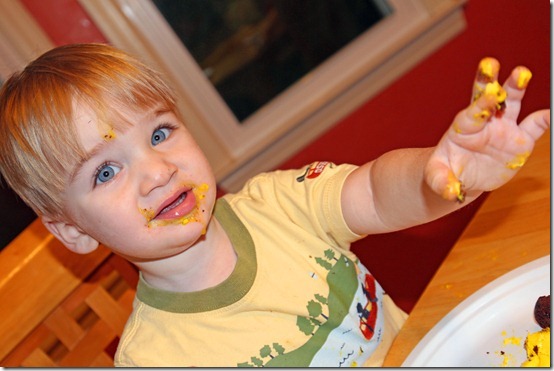 But in the end, I didn’t have to plunge a single Evil Person, and enjoyed reading excessively instead of watching the first football game of the year.

Oh – and one more thing that happens when Daddy’s not around?  Kid Bedtime happens ON.  THE.  DOT.

42 thoughts on “Home Alone: The Review.”