So as much as I wanted September to be a fabulously fresh start full of unicorns and Technicolor rainbows, I woke up on Tuesday at 3am with an abscessed tooth.

But, as I am a professional at such revelries as abscesses, and I shan’t have you feeling all sorry for me twice in one week, please understand that this was the best abscess I’ve ever had.

(Then again, my last abscess happened three weeks post-partum and during a rare Alabama ice storm that kept us homebound and every business in the state closed for days, so I couldn’t get relief for 72 hours and my face swelled up to the size of a giant squid and then when I did get to my Endodontist and he cut into my face, it exploded with the force of a gallon of green slime.  So really, what abscess wouldn’t be awesome after that??)

Oh I’m sorry – were you eating?

This abscess really wasn’t bad – I took Ibuprofen, and within 45 minutes, I was back asleep – a true miracle.

Tuesday afternoon, I paid a visit to my favorite slime-removing Endodontist, who was delightfully relieved to find no such substance stored in my gums this time.  On the way home, I was mulling over my options for (edible) food, and I latched onto what I MUST have: Potato Soup.

I texted Chris and told him not to pick anything up – I was going to cook.

I’m pretty sure he looked at his phone with a ludicrous expression towards my inexplicable industriousness after being drilled upon, and his reply was something to that effect.

I reassured him that Potato Soup was extremely easy to make, and that I MUST have it.

It is one of the first recipes that I remember memorizing as a kid – I used to make it for my lunches all the time.  Then, after I married and moved, my Mom dumped this recipe for what she thought was a bigger, better potato soup recipe.

Since she’s currently busy adventuring and surely will not be reading my blog this week, I think it’s safe to tell you: she made a grave mistake.  Her new recipe as compared to the old recipe would be like replacing Ryan Seacrest with Nicholas Cage – too rich for it’s skill set, way too cheesy, and a bit thick.

So a few years ago, I focused my memory on recreating the Potato Soup of my youth – the potato soup in which you could actually taste the potatoes – the REAL potato soup. 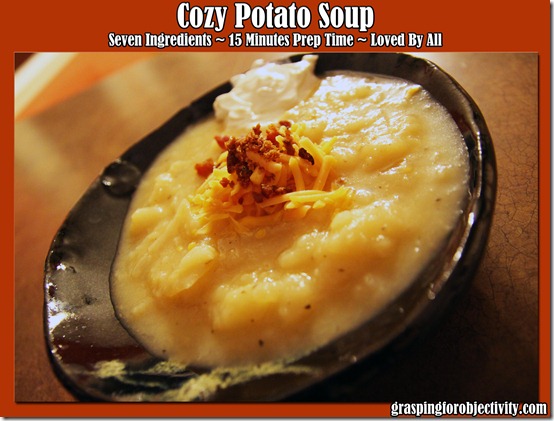 Here’s all that you need:

And here’s all you have to do:

1. Peel the potatoes and rinse.  Cut into large chunks.
2. Cut the onions into large chunks.
3. Put the potatoes and onions in a soup pot and cover just barely in water.
4. Add a liberal amount of salt and pepper (freshly ground is nice), and the buillon cubes.
5. Bring to a boil, then cook on medium until the potatoes are very tender and starting to break up.  Set on low (uncovered) until the broth thickens to a potato-heavy consistency, but before the chunks of potatoes have completely dissolved.
6. Add cheese and milk, stir and simmer on low for a few more minutes.
7. Serve with table garnishes.

I typically start eating mine without any garnishes, because I love the simple flavors. 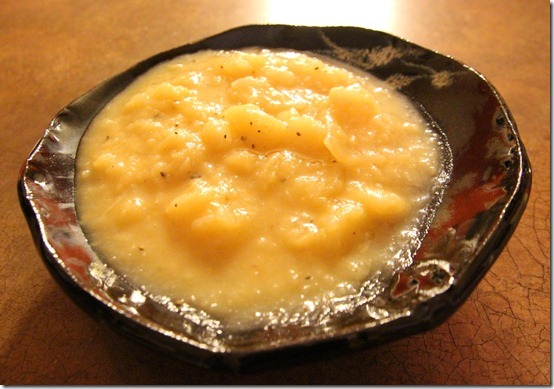 Then somewhere halfway through, I add cheese and sour cream.  NOT bacon – that was just for the photos. 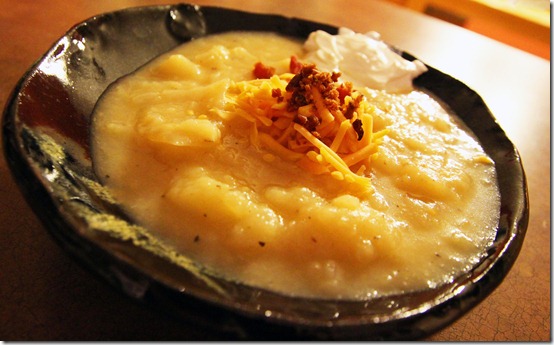 (But I don’t complain – I’m just happy to have a husband willing to eat soup.)

In short, it’s good.  Real good.  It’s even worth an abscess of the agreeable variety just to have an excuse to eat copious amounts of it.

30 thoughts on “Cozy Potato Soup: The Cure for What Ails Me.”