I’ve been very focused on Pinterest lately.  Understanding the geeky intricacies of how best to use it and track it as a blogger, getting ideas for projects to do with Ali, and simply enjoying all the pretty pictures.

But on Chris’ birthday, I woke up feeling Old School.

Something had jogged a memory that was hiding deep in the concourses of my brain.

When we were kids, my Dad absolutely hated the winter.

To help cheer him up, my Mom led us in an annual celebration of Groundhog’s Day.  Us three kids and my Mom would spend hours preparing celebratory construction paper art – flowers hanging from the ceiling, grassy knolls above the fireplace, and butterflies hanging from the light fixtures.

(I’m pretty sure I did the bulk of the Spring Shape Cutting.  Brothers are such lazy mooches when it comes to construction paper décor.)

But creating all of that was girl heaven.

So last Tuesday morning, I decided to try to recreate Construction Paper Utopia: we would have an Ali-directed craft day to celebrate Chris’ birthday.

Ali was thrilled with the idea, especially since she had been quite distraught that Chris would have to go to work.  ON HIS BIRTHDAY.   So having a Daddy-related distraction helped make that unsavory morsel of data fade in it’s awfulness in her little brain.

I gave her paper, markers, glue, craft punches, and scissors, and only gave my assistance or direction when she asked. 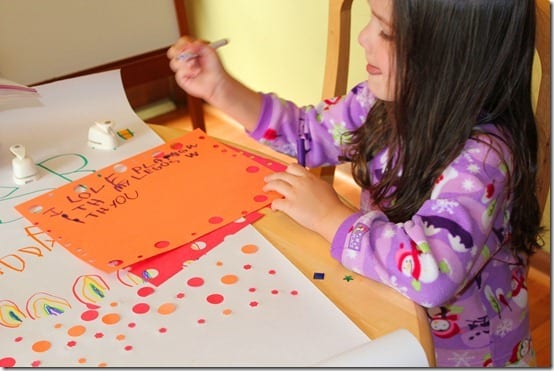 This led to some fabulous signage. 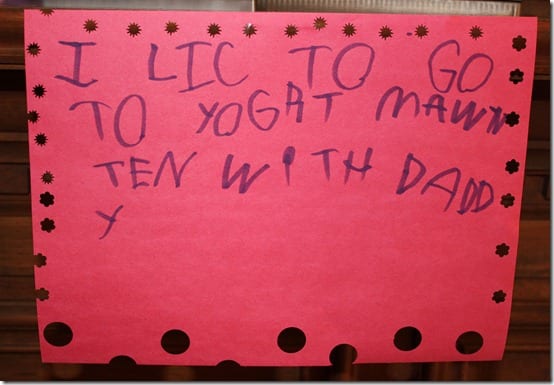 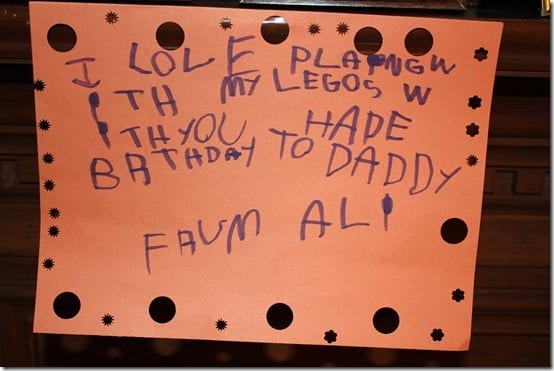 A few weeks before, Ali had also told me exactly what she wanted to get Chris for his birthday: The Lego Bible For Kids.

(I had already bought him The Lego Bible

for Christmas, but we quickly realized that it wasn’t exactly shareable with Ali.)

(Unless we wanted her to find out how babies are born via Lego illustrations, along with other such educational visuals.)

She was confused and a bit disappointed in this Adult-Lego book, so I had reassured her that we’d get him the one for kids when it was released.  And seven months later, she remembered that promise.

So I wrapped it, then let her bling it out. 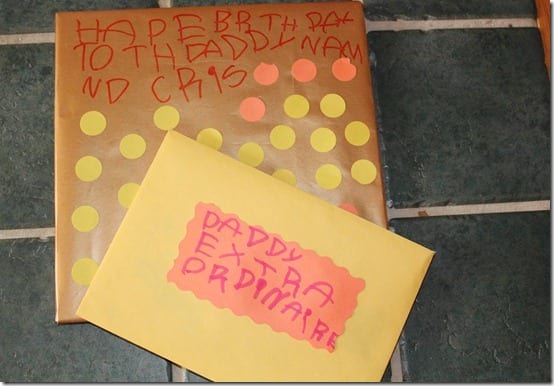 (And yes, I did help her spell extraordinaire.)

She finished Round One of decorations with quite a bit of pride in her work. 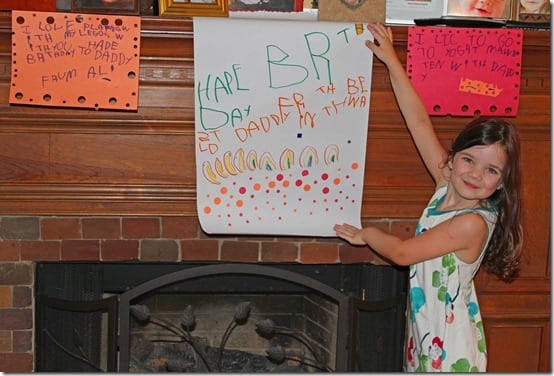 (She’s also been watching a lot of Wheel of Fortune lately.)

“This is SO MUCH FUN!!!” ~ I heard that phrase at least 20 times throughout the morning.  She asked to continue her crafting during quiet time, so we set her up a crafting station in her bedroom.

I gave her everything she needed, including (adult) scissors.  As I left the room, she was bent over, letting one of her stuffed animals color on a card.

“Don’t cut your clothes, your hair, your carpet, or your skin with the scissors, okay?”

“I won’t! That’s why I’m not going to let my friends use my scissors.  They are ONLY allowed to color.”

So I had to get creative in order to display them all.

We had door art, 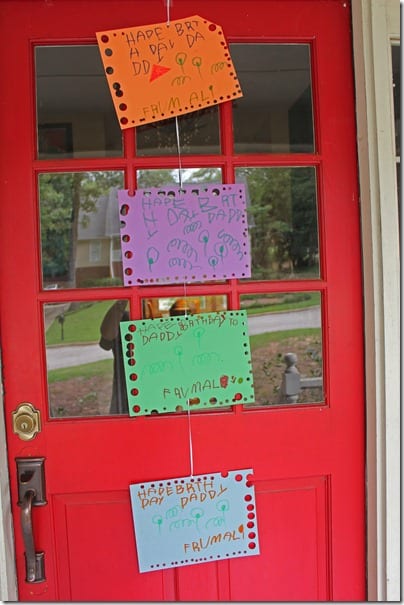 and had to double stack our fireplace scene. 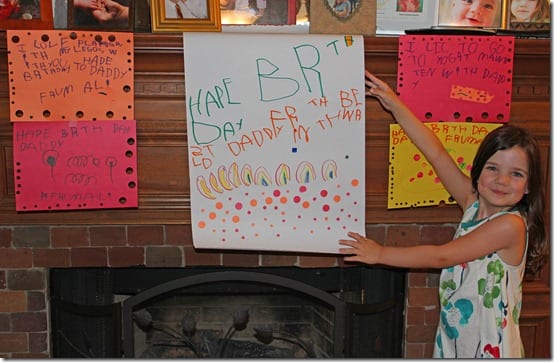 The only Pinterest-worthy item that we did obtain were the world’s best Cake Pops from Jamie and her Rabbits. 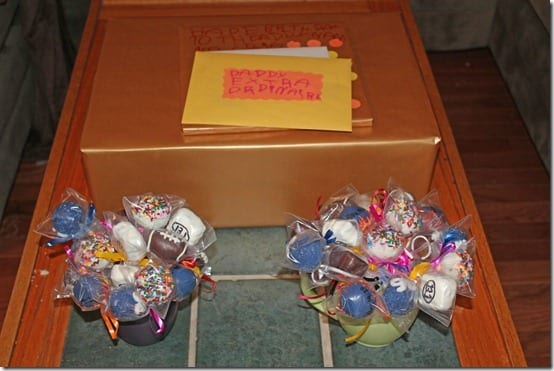 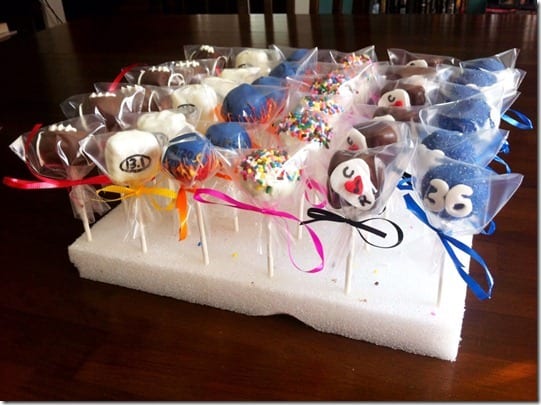 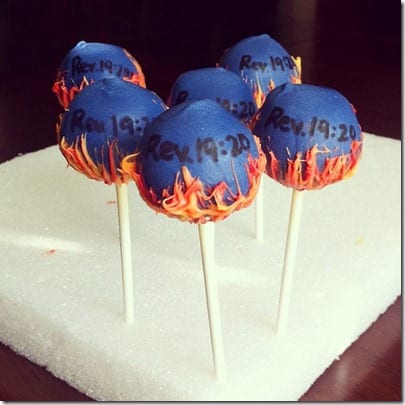 “Lake of Fire” wasn’t exactly what I was thinking when I told her that Chris was currently teaching Sunday School on Revelation, but I guess a fifty-mile-cubed New Jerusalem made of jasper, gold, sapphire, emerald, onyx, ruby, chrysolite, beryl, topaz, turquoise, jacinth, and amethyst surrounded by twelve gates made of single pearls would be a lot to ask on a cake pop.

Plus, Hell Pops are especially tasty.  Who knew?

Ali didn’t give up decorating until Chris was literally walking in the door – she clocked some serious hours on this project. 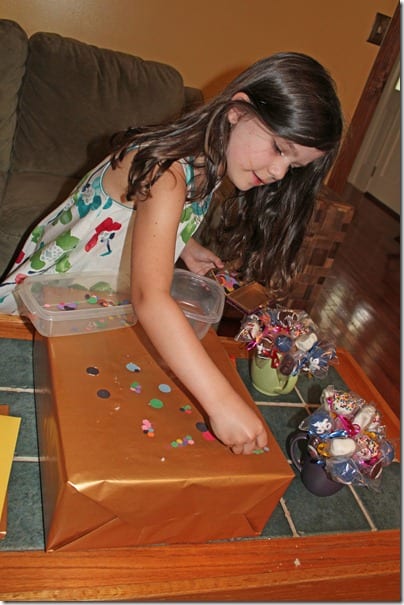 But her hard work paid off.  She had a very happy Daddy. 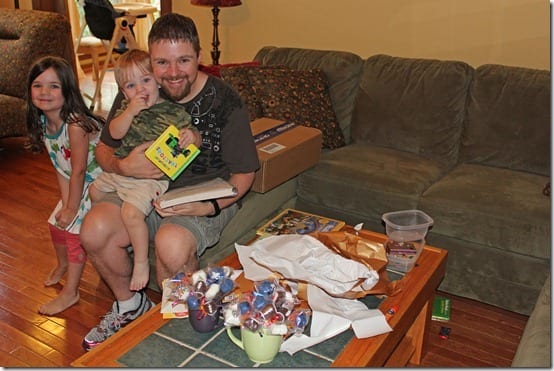 (Mostly about the cake pops.)

But that feeling was quite mutual. 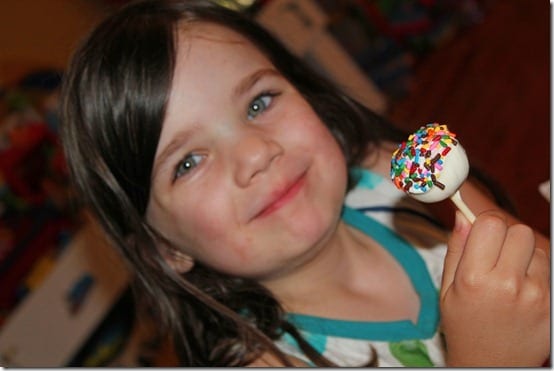