As I have mentioned before, we are fairly serious about eating local – with a couple of choice exceptions.

Chick-Fil-A, of course, doesn’t count – it is a necessary staple of all families-with-small-children’s diets.

And another is The Olive Garden.  Chris and I have a deep-felt adoration for The Olive Garden, as it is one of the only places left that meant something to us when we were dating – everything else fell victim to Our Curse.

So, as culinarily unacceptable as it may be, we still visit The Olive Garden every now and then.  And even more rarely, we take the children along.

On the particularly fateful visit at hand, they only had booths available, so Noah had to try the difficult task of staying in a booster seat.

To distract him from the many opportunities for escape, he started out trapped between Chris and Ali: 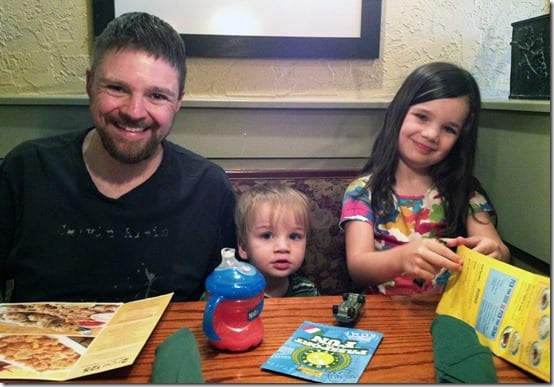 After a few long minutes of many attempts at causing chaos, he moved to The Booster seat next to me, where he immediately dumped all of the sugar packets and began trying to summon invisible liquid to come out of the sweetener holder. 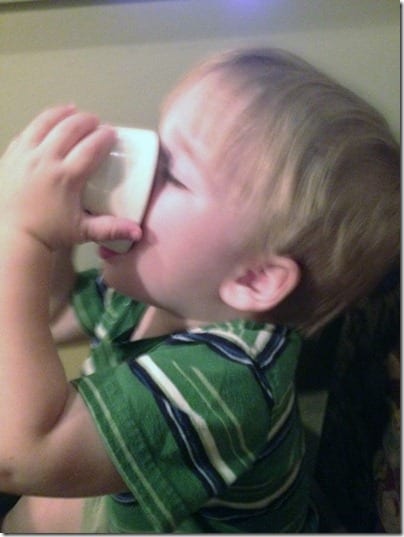 Blessedly, breadsticks finally arrived, which kept him happy for about … 23.5 seconds. 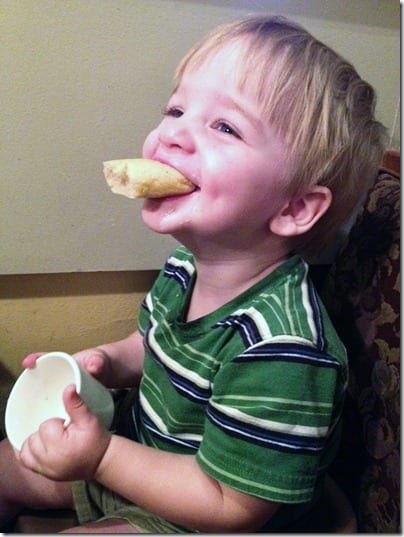 But this story has nothing to do with Noah.

It’s about our waiter. He was new. Let’s call him Bud.

Bud was a young guy, probably a teenager.  He was talking to a table of four guys when we sat down, and after a few minutes that we made inordinately long by Noah’s attempts at destruction, he finally turned around to get our drink orders.

“Hi! Welcome to The Olive Garden.  What can I get y’all to…

(to himself, he whispered) is this my table?

Carissa was no longer within earshot, so he disappeared to find her.

Apparently Carissa did affirm that we were indeed Bud’s table, because after a tortuously long five more minutes, he returned.

“Hi! Welcome to The Olive Garden.  What can I get y’all to drink?”

He took our orders, then went back to talking to the table across from us.

I got a good look at them: four guys in their mid-thirties, who were awarded the exquisite privilege of hearing our waiter’s entire life story.

During the next fifteen minutes, as he managed to squeeze in bringing us our drinks and taking our food orders, he told them,

“Yeah, man.  At Ruby Tuesday, all you have to do is bring people their food and refill there drinks.  But here??? You have to bring breadsticks!! And salad!! And refill their breadsticks and salad!!!! It’s ridiculous, man.”

Chris managed to get a word in between the intimate details of Bud’s Life Story and ask for more breadsticks and a drink refill for Ali, thereby making this poor kid’s job infinitely more ludicrous.

Bud dragged himself to our table and huffily handed me the breadsticks, not having the time nor energy to place them all the way down on the table.  Then he turned around and started talking to the four guys again – before handing Chris Ali’s lemonade.

We watched, puzzled.  And then, without turning around or looking in our direction, Bud reached his arm back, lemonade in hand, for Chris to take.

We sat there and stared at this comically back-extended arm for a second, drinking in the fabulousness of the moment.

Then, still without looking, he shook his drink-bearing arm impatiently, veering dangerously near Chris’ face with the lemonade.

Chris quickly saved the lemonade (and his own head) from danger.

A few minutes later, I couldn’t hear his words, but it was clear that he was back to expounding on the preposterous demands of his job.  Bud’s voice raised a notch as he said, “Like these guys!!”, and exaggeratedly gestured in our direction.

I nearly spit my so-difficult-to-come-by drink.

Finally, the table of men left, and he was left with no one but us to talk to.  Plus, I think he realized that the whole back-handing a drink at a table may not be the best tip-attaining strategy.  So all-too-suddenly, Bud was our best friend.

Every 90 seconds, he’d pop up from nowhere.

“Hi! You need anything?”

“Do you guys need anything now?”

“Can I get you a refill on that drink?”

“Can I do anything for you?”

“Do you need any more drinks?”

“Still to the brim.”

“Ready for your check?”

“Never been so ready in our lives.”

So.  Keep your eyes out for Bud: Coming soon to a restaurant near you!

(Preferably one that doesn’t serve breadsticks.)

If you see a red GT in the parking lot, prepare yourself for the meal of a lifetime!

31 thoughts on “The Burden of Breadsticks.”