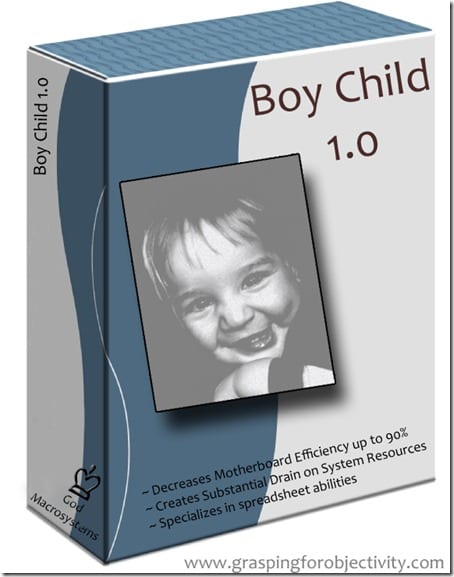 I recently upgraded my software to Boy Child 1.0.  I’m also running Girl Child 5.0 and was previously running Boy Child 0.11 without incident, but upgrading to 1.0 seems to be causing some conflicts.

Boy Child 1.0 is constantly overrunning Girl Child 5.0’s processes, creating both programs to either freeze up or melt down.

Also, Boy Child 1.0 and Girl Child 5.0 are trying to utilize the same MOM Memory simultaneously, and this is causing system crashes and serious sluggishness in performance.

I am afraid that these issues could be frying the Motherboard.

But besides that, the new version of Boy Child seems to have some serious bugs.

First of all, I am getting the Blue Scream of Death when trying to perform several crucial functions within the program, such as emptying the recycle bin, removing small and/or sharp objects from the program, and even regular system maintenance.

For instance, quite a bit of dust build-up occurs in the program’s earboards and navelboards, but when I try to clean it out with Q-Tips, I almost always get the Blue Scream of Death, or  Boy Child 1.0 boots me out of the software.

Perhaps would it be more effective to use compressed air on these areas?

I am also having to perform constant rebutts, as Boy Child 1.0 seems to have some sort of system virus or malware that causes all sorts of random crap to smear across the screen.

I have found that Boy Child 1.0 performs best on a laptop, but I would really prefer to run it on a desktop.  Do you have any recommendations on making this transition any easier?

Also, what are the licensing limits to Boy Child 1.0?  I have been able to successfully install it onto other similar operating systems, but when I try to install it onto a Nursery Server, it crashes the entire network.

Clearly, the administrators of the Nursery Server do not appreciate the effect that it has on the rest of their programs.

The Spreadsheet function, however, is quite impressive.  Boy Child 1.0 can spread sheet throughout the entire network quicker than Girl Child 5.0 can process what is happening and spit it out into a Word Document.

Also nice is the extremely Hi-Speed network on which Boy Child 1.0 runs.  There are hardly ever breaks in connection, nor are there software outages.  However, Boy Child 1.0 does seem to have be non-compatible with the operating system’s Sleep and Hibernate modes, since it seems to constantly be uploading kilobytes and downloading megabytes.

I also cannot figure out how to use the mute function within Boy Child 1.0.  It wreaks havoc on the system’s speakers, often producing a loud screeching noise that is quite unpleasant.

(This often occurs congruously with the Blue Scream of Death.)

Finally, Boy Child 1.0 seems to have mixed up the input and output jacks.  It often sticks things into the nose jack, and expels things from the mouth jack.  It doesn’t seem like either of these should be two-way channels.

Any help that you can offer with these software issues would be greatly appreciated.

Thank you for your email to our tech support department. We will try to address all of your concerns and make suggestions for Boy Child 1.0 System Improvements.

Regarding the system crashes caused by running Boy Child 1.0 and Girl Child 5.0 simultaneously on the same Motherboard, this is not covered by your software support package. Although we understand that many people choose to run these multiple programs congruously, they are not designed to do so. Due to extremely intricate and unpredictable compatibility issues, multiple software packages that are run on the same Motherboard will always have some system conflicts.

However, here are some tips to try and help the issues you’re facing:

1. Try running Boy Child 1.0 on the Fatherboard after 5pm to lighten the server load and allow for a soft reset of the Motherboard. However, this will activate the Jealousy function in Girl Child 5.0, so make sure that you rotate server load as needed.

As for your other various issues with Boy Child 1.0, hopefully the following fixes will help.

It appears that a lot of your issues with Boy Child 1.0 are stemming from the Mobility Plug-In that you are currently using. According to your system specs, you’re using Walking 0.04. Remember that this Plug-in is still in Beta, and can cause serious issues until you upgrade to Boy Child 2.0.

Some of the issues documented so far with this Walking 0.04 Beta are:

a. Files disappearing from Fridge 4.0 and Bookshelf 3.0
b. Crashes in Coffee Table 9.0
c. Boy Child 1.0 procuring an Independence Trojan Virus that can cause multiple occurrences of the Blue Scream of Death when you try to quarantine said Virus.

(However, this Independence Trojan Virus can help with one of your other issues, which is transferring Boy Child 1.0 from a Laptop to a Desktop. We recommend that you make this transfer before wiping the Virus from the system.)

(As a side note, it has been documented that this transfer can create an unexpected side effect within the Motherboard of a spontaneous running of Tears 3.5 and Sentimental 8.9. Proceed with caution.)

Regarding your issues with getting the Blue Scream of Death when emptying the Recycle Bin, try running another process on Boy Child 1.0 simultaneously, such as a the Stuffed Animal or Squeaky Toy Functions.

Do not use compressed air on any areas of Boy Child 1.0. If the Blue Scream of Death occurs when cleaning earboards and navelboards with Q-Tips, just leave them as they are. Remember that no amount of dirt buildup will keep Boy Child 1.0 from running at optimal levels.

As far as installing Boy Child 1.0 on a Nursery Server, we hope to address this in later versions. Just continue letting the Nursery Server administrator know that the crashes are very short-lived, and that you’re sorry for the damage to their network.

Regarding Boy Child 1.0’s Word Processing Skills, these are greatly improved upon the installation of Boy Child 1.9. However, we recommend using the Sign Language 3.2 Plug-In until you are qualified for the software upgrade.

You are, however, qualified to upgrade to Boy Child 1.6 – this may help some of your issues. Proceed with caution, though, as the spreadsheet functions get even more aggressive in the newer versions.

In fact, Boy Child software systems will continue to spread sheet throughout the network all the way up through the Boy Child: College Dorm version.

As for the lack of Hibernate and Sleep modes when running Boy Child 1.0, we recommend that you turn off all system monitors overnight to allow for a hard reset of the Motherboard. Do not try to run any overnight programs, including system scans – this can cause severe slowdowns during the regular operating hours.

Regarding the Mute Function within Boy Child 1.0, we have found that placing an industrial-strength piece of Duct Tape over the speakers really helps. Just make sure that you remove this fix before attempting to install Boy Child 1.0 onto a Nursery Server.

And finally, regarding the input and output jacks being mixed up: ALL jacks on all Boy Child software packages are two-way, especially when Marbles 5.2 or English Peas 8.5 are simultaneously run with Boy Child 1.0. There is, unfortunately, no fix for this issue.

The Sequel, Parenthood 2.1, can be found here.