“Did you see this picture I’m working on? I’m an artist!”

“Well, you can do the ballerina part, but probably not the Princess part.”

I immediately regretted my words.

I should be better about allowing her to believe in fairytales and impossible dreams!  I’m raising her to be way too much of a realist, and at five years old!  I’m a horrible mother.

I’ve got to go with it now…

“You have to marry a prince to become a princess.”

“Well, I’m going to marry Ethan. I already know that.”

“But he could become one…”

“But girls can become princesses!”

“You mean like Princess Kate that married Prince William – do you remember watching her wedding?”

“A girl can become a Princess by marrying a Prince.  But a Prince has to be a Prince first.  And, unfortunately for you, there are no Princes in the United States.  So you’re going to have to move to another country if you want to marry a Prince.”

“Okay then.  So what countries have princes?”

“Well, there’s England… and The United Arab Emirates… and I’m sure there are a lot of others.”

“Tell me ALL of the countries with Princes, please.”

I pulled up Wikipedia… Ah! List of countries by system of Government.

“Okay.  There’s Andorra…Antigua and Barbuda…Australia… – NOAH! Take that out of your mouth! – The Bahamas… Bahrain… are you getting all of these?”

“Lesotho…Liechtenstein…Luxembourg…Malaysia…Monaco – NOAH! GET OFF THE COFFEE TABLE!! DOWN, BOY!! – …Morocco… – have you decided where you’re going to go yet?”

“Qatar…Saint Kitts and Nevis…Saint Lucia…Saint Vincent and the Granadines…Saudi Arabia… – but I don’t want you to go to Saudi Arabia, though – okay?”

“Some men aren’t very nice to women in Saudi Arabia.”

(I mean…I personally am dying to visit Saudi Arabia, due to my complete obsession with the secrecy of it all.  However, I don’t think that I want my tiny daughter headed over there to score herself a Prince.)

“Great.  Now can you write all of those down for me?”

“Okay.  Let me know where you think you’ll head off to.”

And I sighed with relief.

Clearly, I did not destroy her dreams – she, like her father, just likes to have all of the facts clearly laid out so that she can plan ahead properly. 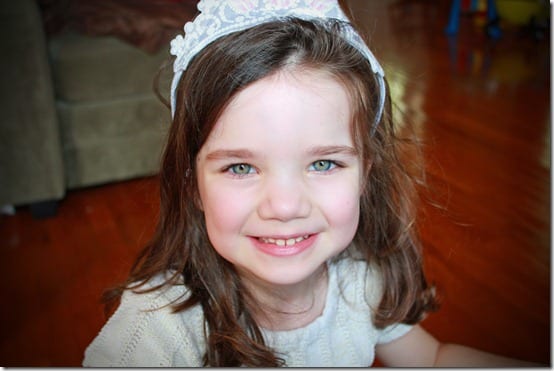 So now the only question is, when she’s a Princess, what does that make me? The Queen-In-Law?  The StepQueen?  The Princess Mum?

I’m off to work on my crown.