“Rachel, you’re getting too skinny!”

“Look at your arms!! You look anorexic!”

Surely they weren’t talking to me, and clearly this wasn’t someone who knew me very well – that observation was seriously ridiculous. I’ve never been anything within ten miles of too skinny in my entire life. Had they not noticed my thighs? And the rolls in my belly? Come ON, people.

Then I remembered the weird effect of losing weight – it makes other people see you as skinnier than you are, all while you see yourself as weighing the same as you always have.

I awkwardly answered a stumbled “Um, thanks?”, or something.

But what I wish I had said was this…

When I was in high school, I wore a sleeveless dress to an event. An adult told me that I really shouldn’t have worn that, because “You’re just not built for it – you have too fat of arms to wear sleeveless dresses.”

Although they were trying to be constructively “helpful”, I was seventeen years old and, albeit a bit later than most, just starting to form my own body image.

I carried that statement with me for an entire decade. I had sleeves on my wedding dress because of it, and I had a wardrobe full of sleeved shirts and dresses – until just a couple of years ago, when I finally let it go and accepted my arms as they were.

At the age of seventeen, I weighed 138 pounds. Today, I weigh 128 pounds. There were a lot of ups and downs (mostly ups) in my weight between then and now, but I still can’t imagine how 13 years and 10 pounds could swing one from having too fat of arms to wear a sleeveless dress to looking anorexic.

And that’s just the point.

There’s something I’ve learned in those 13 years – everyone has an opinion, and most of them are vastly different. And my body should not, will not, and cannot be defined by other people’s opinions.

Okay – this is not true.

I have learned that this is how it should be, but putting it into practice is another battle entirely. I thrive on words of affirmation, which also explains why I am motivated to blog my soul’s contents for the world to see. I live and die by other people’s words. They lift me up and they destroy me.

But that should not be so. Opinions always have and always will be as unique and wide-ranging as the people that are creating them. If I allow myself to internalize each and every one of the words spoken to me and about me, I will become a scarred reflection of everyone else.

The bottom line is this: I was healthy when I was seventeen and I’m healthy at thirty. There were times in between then and now that I probably wasn’t so healthy, but the important part is, I adjusted.

But even at my healthiest and certainly at my unhealthiest, I have enough of my own tendencies and self-consciousnesses to fight without owning other people’s ideas and perceptions as well.

My goal is this: to become unlabeled.

And even more importantly, to teach Ali how to stay unlabeled.

I sincerely hope that it doesn’t take my daughter thirteen years to figure out this crucial concept for herself. I want for her to be able to keep the complete unawareness of body image that she has now, at five years old, until she is thirty and beyond.

Impossible, probably. But it’s most certainly worth the effort. 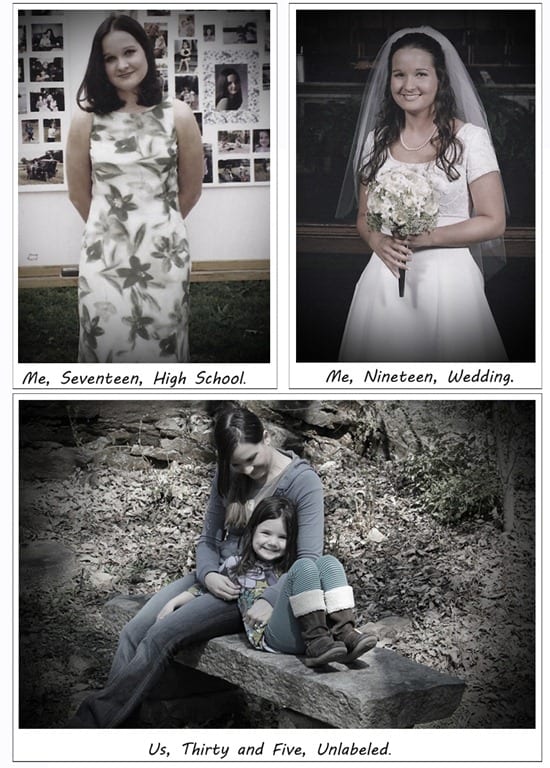