Hi World – It’s Noah, back as a guest blogger again! 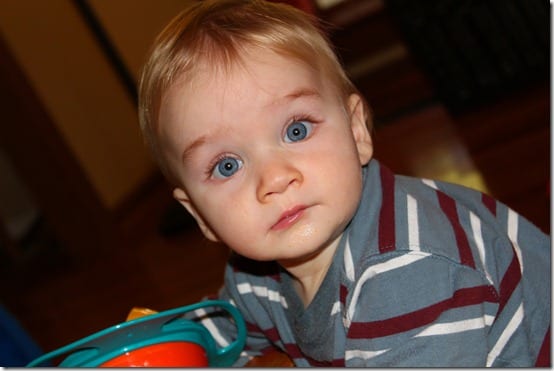 I know, I know.  I haven’t been blogging as much as I used to, but I’m far too busy in my evil plot to destroy all of The Servant’s electronic devices to actually sit down and use one. 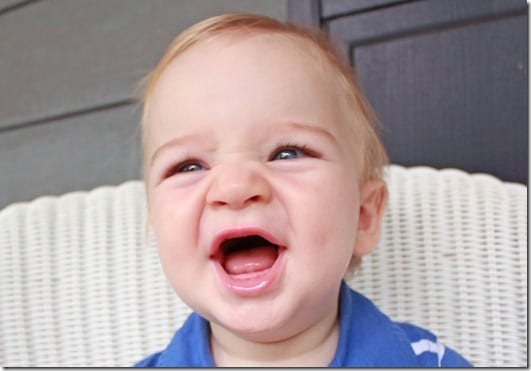 (Hey – did you know if you aim a drool bomb directly into the microphone jack of an iPhone, it will disable your Servant from hearing anything on their phone except on speakerphone for approximately 12.75 hours?  It’s great if you want to hear both sides of their conversations.)

(Ooh, ooh – and the metallic sides of the iPhone 4 taste AMAZING – just like the aftertaste of Gorgonzola Cheese!! You should try it if you’re ever out of nasty cheese.)

But I digress.  I just wanted to pop in for a quick product review of The GyroBowl.  You know – that bowl that you supposedly can’t spill, no matter what you do with it?? 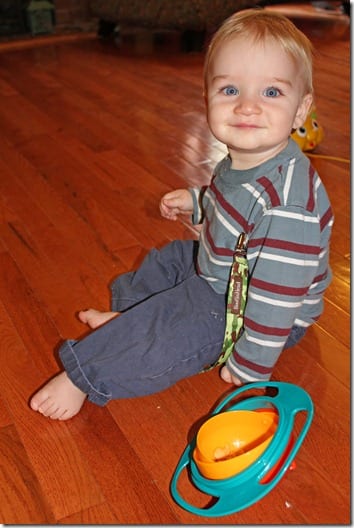 The servants are total suckers for an interesting “As Seen On TV” product (except for Snuggies.  No matter how many times I ask, they won’t get me the Super Plush Infant Snuggie!!  I don’t get it. Super plush!!).

Anyway, so when they saw the Gyrobowl fall down the stairs and not spill a crumb on it’s commercial, and then they saw one for sale in Wal-Mart, they were like sitting consumer ducks.

So they totally bought me one. 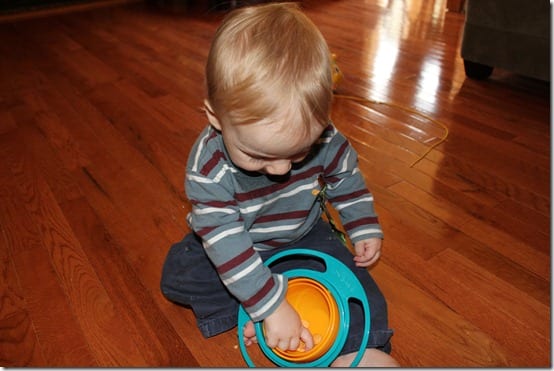 I took the whole “unspillable” concept as an affront to my ability to thoroughly disperse all manners of matter, so I accepted their grievously offensive challenge. 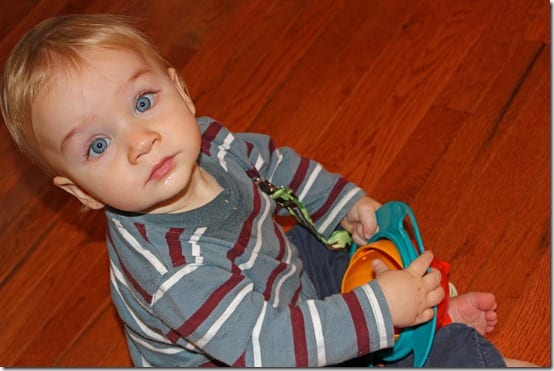 You think I can’t spill the unspillable bowl? Give it to me and let me try. 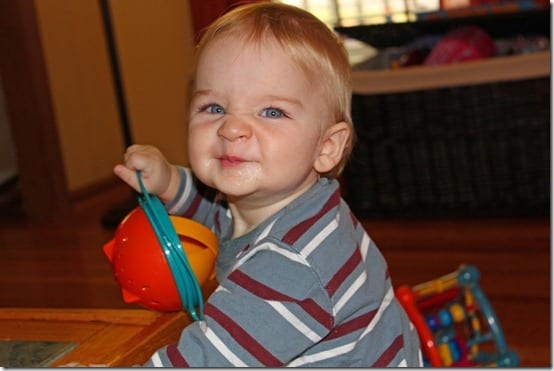 I have to admit that I was impressed with my inability to immediately spill it into my crotch,  my favorite place to store excess food. 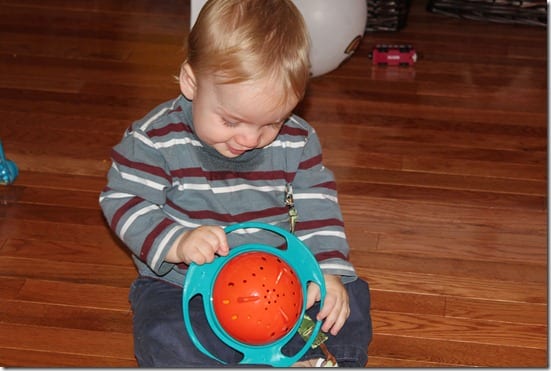 But I was not deterred.  Nay, I was determined!! 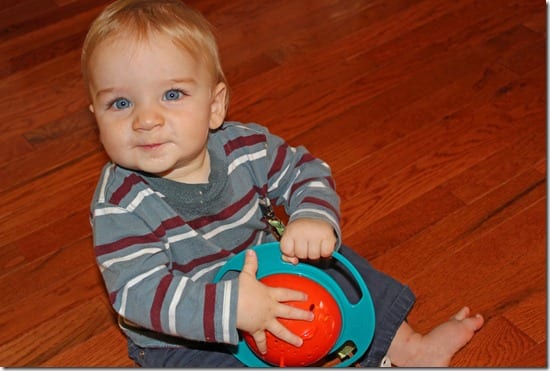 And  I did not disappoint myself.  Within seconds, I had marked my territory and proven that the Gyrobowl was not so Gyroriffic after all. 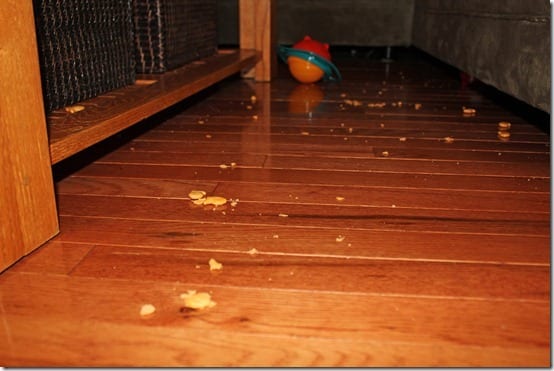 Then I laughed with my Doofenshmirtz cackle as The Servant cleaned it all up and naively gave me another bowl of Goldfish. 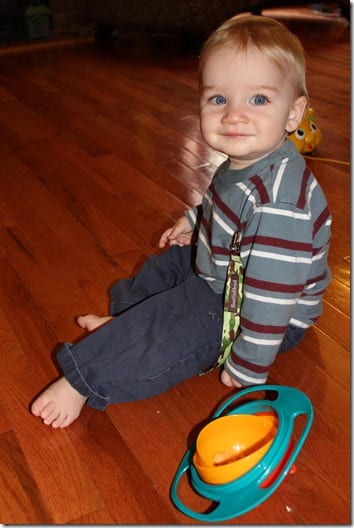 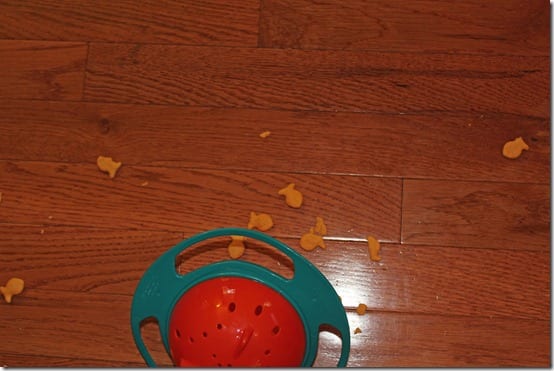 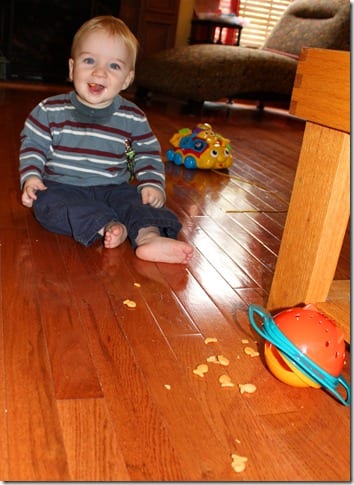 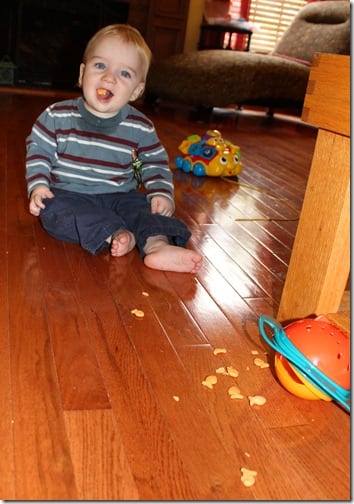 (But at least I did manage to put one Goldfish in my mouth that last time.  I think it made The Servant pull out one less of her eyelashes in despairing frustration.)

At any rate, I found three distinct ways to deproof the Babyproof bowl:

1. Turn the bowl over at a very fast speed while simultaneously jerking it to the side.  This requires the use of specific angles and cosines that I calculated beforehand with the help of The Servant Who Calls Himself Daddy’s Reverse Polish Notation Calculator.

Or, if you don’t have one of those handy,

2. Simply hold the bowl in place with your thumb to keep it from turning when you dump it.  So easy!! So effective!!

But if you want to add a touch of pizazz to your dumping,

3. Get a goldfish stuck in between the bowls, thereby preventing the gyration of the bowl altogether.

In summary, I found this bowl to not slow my spill processes down at all – in fact, I would say that it’s claims reek with the stench of one of my Masterpiece Diaper Creations, which, coincidentally enough, are also not spill-proof. 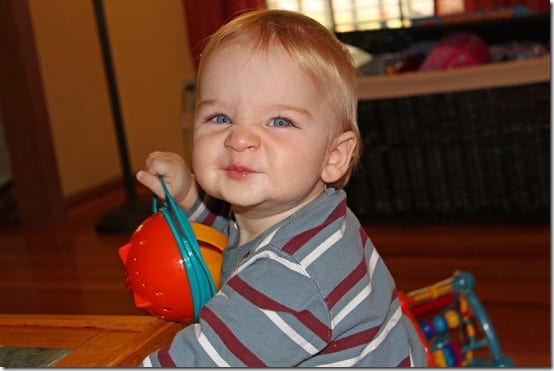 But then again, what did they expect?  I am, after all, an Artisan Mess Maker. 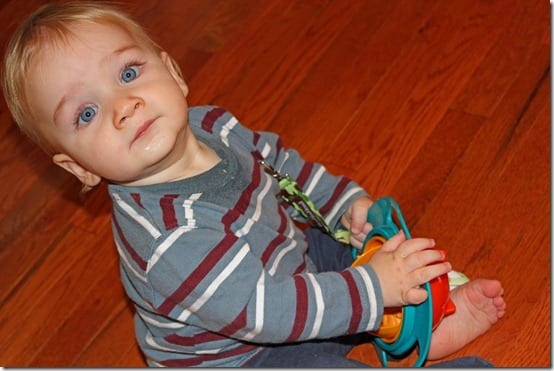 17 thoughts on “The Gyrobowl: Smarter Than A Baby?”