The overwhelming emotions of victory and exultation washed over me. At a time when I should have been exhausted and comatose, I was instead cheering for myself with gusto and pride.

It all started last week…

10 days ago: Ali randomly popped out from the backseat,

Chris and I looked at each other. We used to camp before we had kids, but notsomuch with our little tagalongs.

“Do you even know what camping is?”

This Tuesday: Mom called. Asked if we’d like to go on a family camping trip this weekend to Buck’s Pocket – the state park that we went to every year from the time I was six years old to until I was twenty-four years old.

Without even thinking about it, I gave her my laundry list of obvious reasons that this was not practical or possible.

Chris is going to the football game…our tent is broken…it’s going to be cold…blah blah blah.

Wednesday, 10 PM: After pondering for a day and a half, including thinking more than a few times about Ali’s camping hopes and dreams, I began to actually consider going…

But that’s crazy talk. I can’t camp with two kids on my own.

Then I remembered that the campground in question now offered rentable camper trailers.

…could I get one of those campers?

…was I brave enough to go camping without Chris?

I had wanted something special to do while he was gone. This was certainly special…and a little reckless.

Thursday, 8 AM: I called the park. No answer – I left a message, figuring it would be a few hours before they returned the call. It is a campground, after all. So I hopped into the shower.

Thursday, 8:01 AM: My phone rang. I jumped out and answered the call from the Park – they had one camper left. Before I realized what I was doing, I had reserved the camper and committed to go.

(Granted, there would be grandparents available with much help, but they would be spread over a total of five grandchildren, cooking, and their own camping concerns.)

Thursday, 8:05 AM: I got back in the shower, a bit shocked at myself. I now had twenty-six hours to completely plan for, pack for, and shop for camping. And camping is not exactly low maintenance. Thus began a day of manic preparations.

Friday, 11:00 AM: I left the house, an hour later than I had planned, but earlier than any of the other family. I might have patted myself on the back a few too many times for this preparation feat.

Friday, 1:00-3:00 PM: After arriving at the campground, I had two hours that made me doubt my sanity and choice in weekend plans, including a refusing-to-nap baby, 3o minutes of blacking out camper windows with garbage bags and painter’s tape to try to encourage napping (who knew campers had so many windows??), then finding out that I picked the wrong camper and having to deblack the windows, move campers, and reblack new camper’s windows.

But finally, after all was settled and a nap (albeit tiny) was had, I breathed my first breath of camping air and remembered why I loved this place. 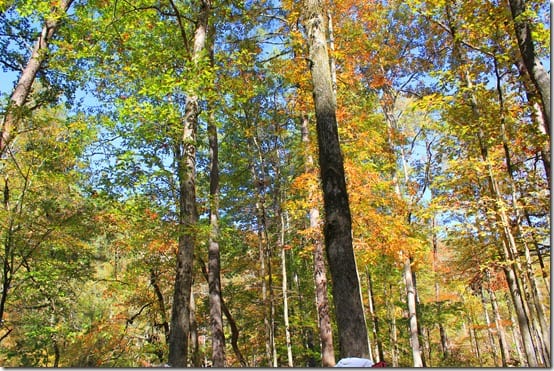 I walked down to the rock pit – a dry creek bed that my brother JC and I spent many adventure-filled camping trips – and found him and Ali, having already scaled one of the steep rock cliffs: 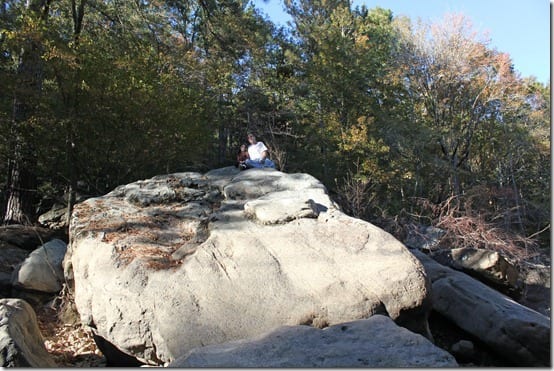 It’s a bizarrely awesome feeling to see your kid reliving your childhood.

JC and I took our two oldest kids around to some of our favorite rock hideouts. 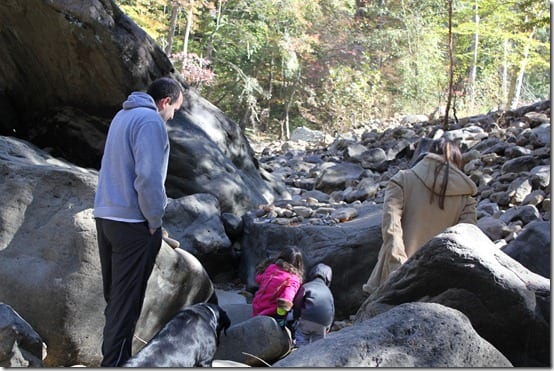 Not surprisingly, our children mimicked our own tendencies: Eli climbing recklessly and without waiting to make sure someone could catch him, and Ali wanting a hand to hold for every step. 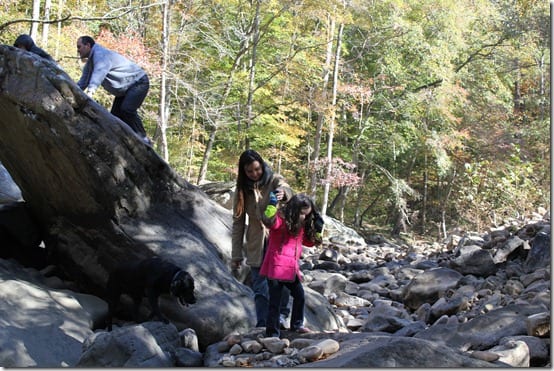 I don’t know how she knew camping would be so much fun, but she was right. She was in heaven, having everything a girl could ever want… 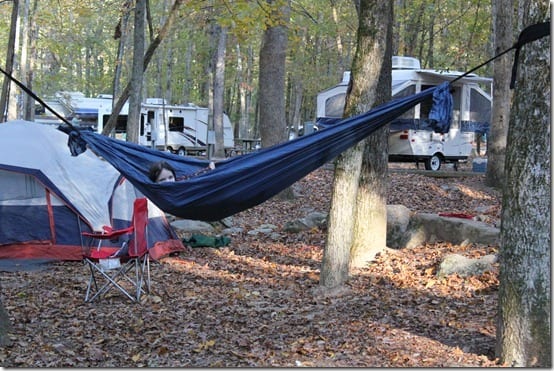 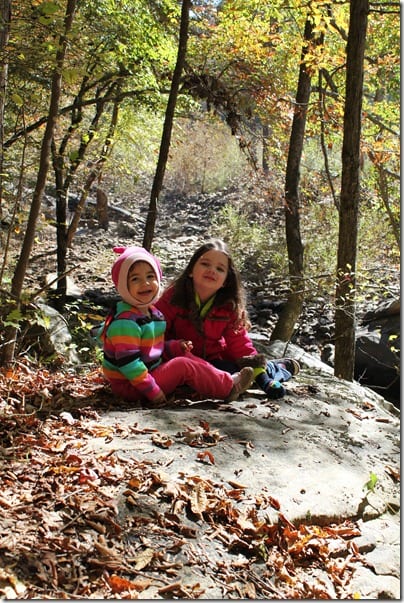 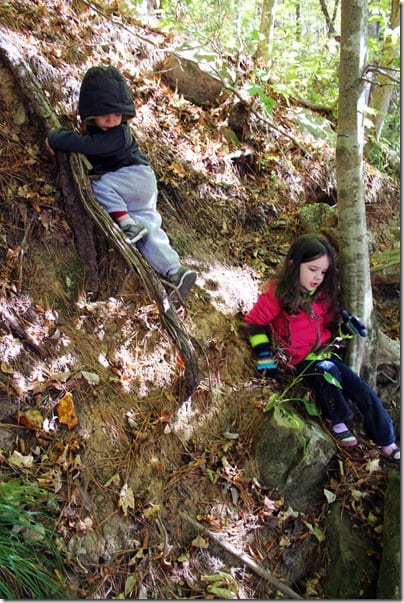 Playgrounds (with the same playground equipment that we played on 20 years ago), 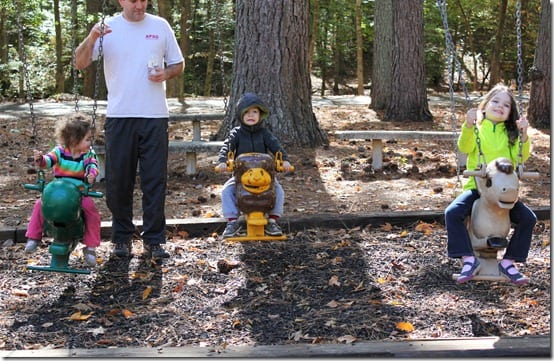 And a wonderland of rocks both big and small. 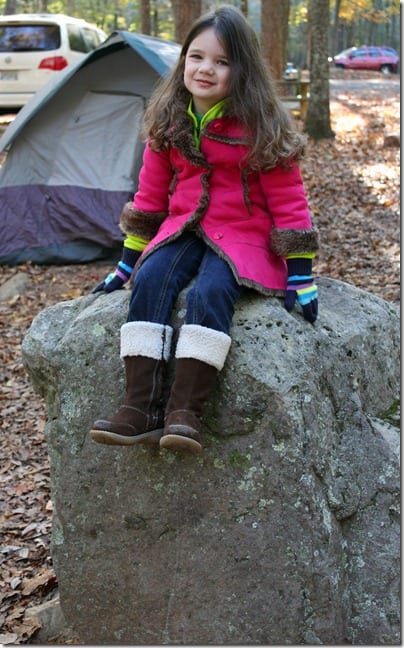 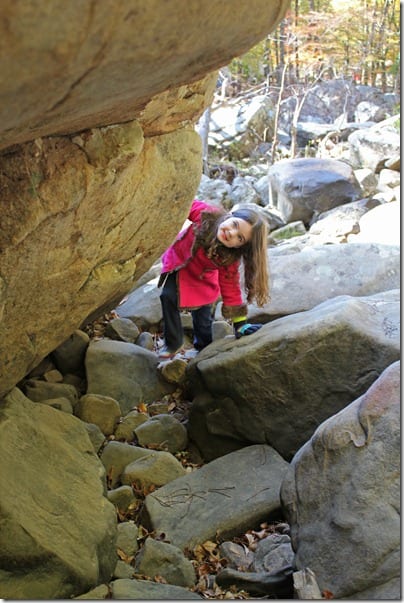 Noah, too, had fun, despite some cousin jealousy issues, 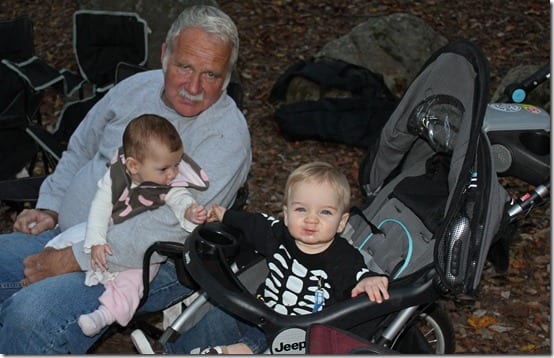 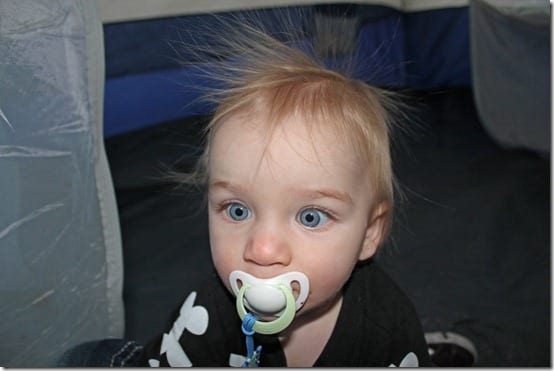 He spent most of his trip watching the fire in sheer disbelief, 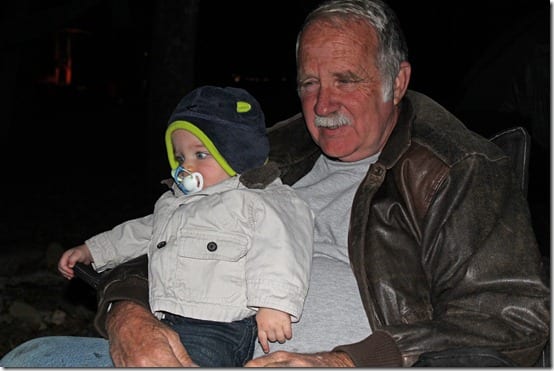 and lazily stuffing his face. 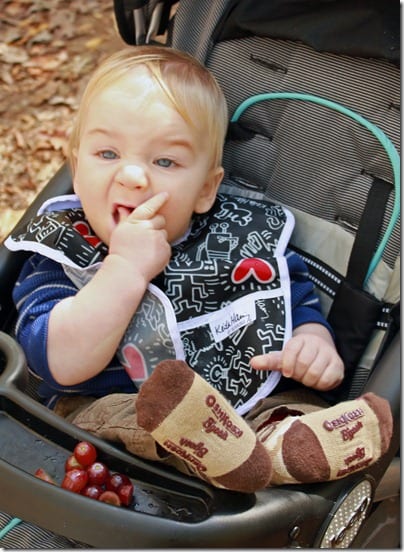 Having cousins around was splendid. Eli made sure he stayed ahead of everyone else, 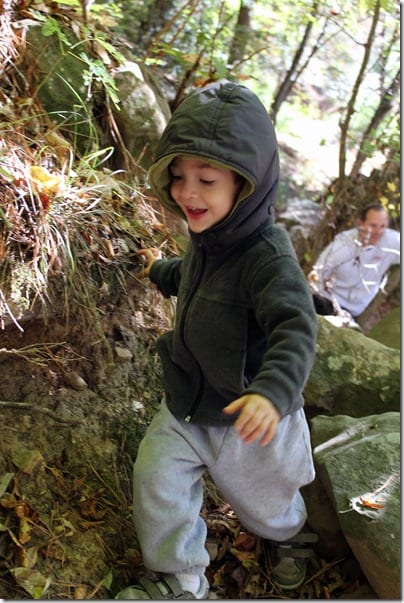 Andi helped Noah in the task of making sure that the Grandparents felt needed, 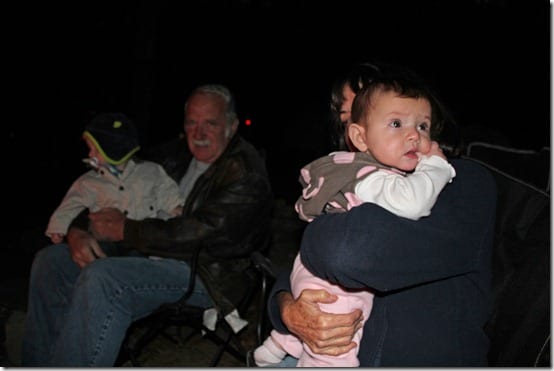 And Tessa made me feel better about my Camping Hair. 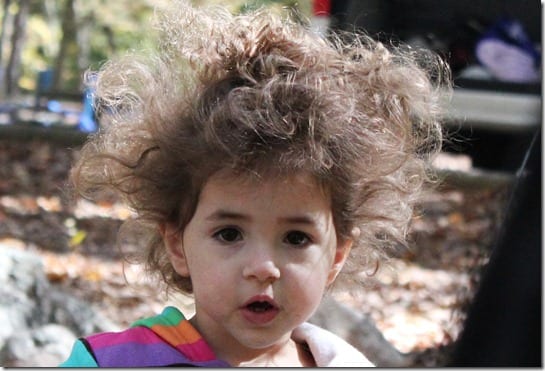 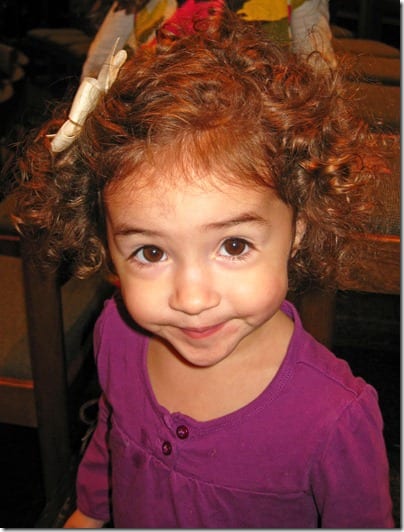 It was decided that Ali would have her camping wishes come true by sleeping in the tent with Gramamma and Pop, and Noah and I would sleep in the cozy, warm camper.

However, all of the tent-dwellers stayed nice and toasty, and I froze my ever-livin’-butt off in the camper. 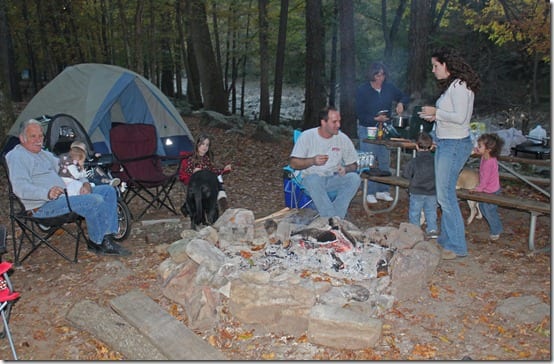 (Fortunately, I had a space heater to point at Noah’s bed, so quite literally everyone in the entire campground was comfortable – except for me.) 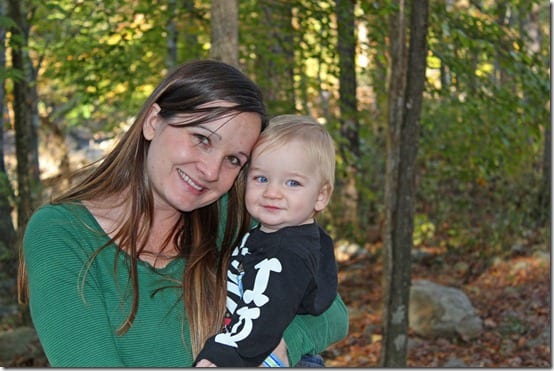 Right as we were getting ready to leave, after all of us had been 30+ hours without a shower and reeked of camping in both sight and smell, my Mom decided it was time for a family photo.

(CAUTION: DO NOT SNIFF PHOTO.) 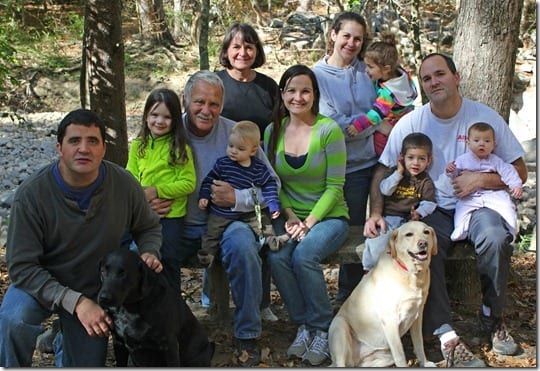 Saturday, 4:30 PM: I arrived home with the kids, unpacked the car AND all of our bags while Ali fed herself and Noah (benefit #557 of having kids four years apart). After that, I bathed both kids and got them in bed, and then had a moment, at 6:51 PM, of actually cheering, out loud, in absolute and unashamed self-honor.

I CAMPED WITH TWO KIDS. BY MYSELF.

(Not technically by myself, but I aim low.)

32 thoughts on “An Unexpected Undertaking of the Camping Variety.”