Due to obvious reasons, I began my Grand Minivan Challenge two days late.

On Friday, I packed up the two kids and headed to pick up our borrowed ride from Serra Honda.

Ali wasn’t quite understanding the concept of a car store, so I got grilled all the way there…

“So how are we going to pick it up off the shelf? Isn’t it too heavy?”

Obviously, the kid isn’t too observant of car lots.

When we arrived and were being treated like royalty by the Serra Honda Man, all Ali could talk about was how extremely badly she wanted a smoothie, of all things.

(Enter SHM’s mental images of an entire grape smoothie spilled in the back seat of his top-of-the-line 2011 minivan…poor guy.)

I assured him that no smoothie purchases would be made.

Which made Ali immediately contrary.  The entire time I was strapping her into our borrowed car and sliding the door closed, she was calling out to him, “My Mommy’s Pilot is my favorite car here! I don’t want to borrow your Odyssey! MY HONDA PILOT IS BETTER!!”

She certainly didn’t win herself any Customer-Of-The-Year nominations.

So.  The Test Drive. 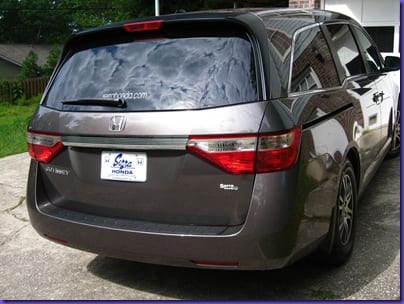 First of all, I will definitely award it Cool Points for the new body style.

You see, one of my readers, Angie, helped me dissect my subconscious dislike of the minivan shape.

If cars were a pair of jeans, then minivans most definitely have The Dreaded “Long Butt”.

I don’t know how I never realized that Minivans were Mom Jeans. 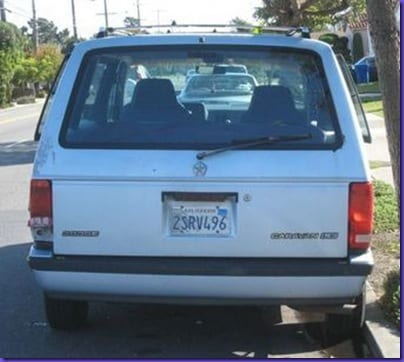 Long, flat butts all around. 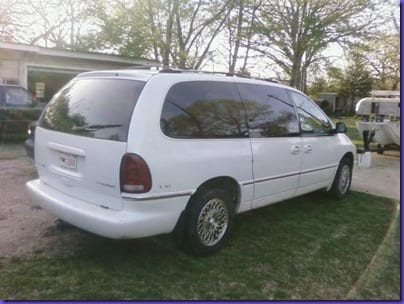 As compared to an SUV, which has a much more stylish, curvy rear… 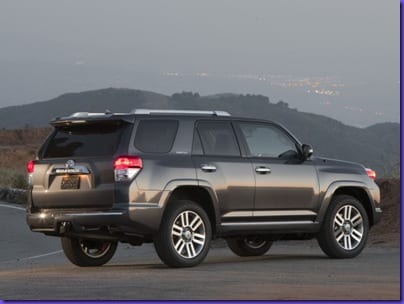 And then I realized: the fronts of minivans are no better – they’re…saggy.  Like, I-Nursed-A-Dozen-Kids saggy. 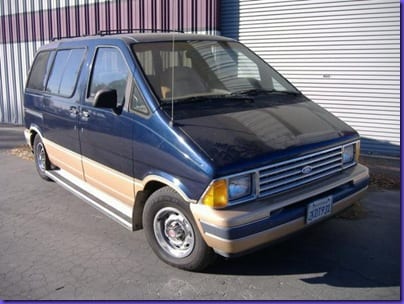 Now I’m certainly pro-nursing (OBVIOUSLY), but let’s not be in denial – it does cause more than a bit of saggishness.  And nobody wants their sag mirrored in the front of their car.

Even the older models of Odysseys have quite a sag to them. 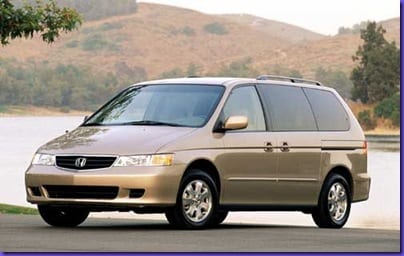 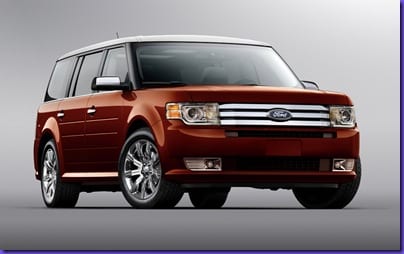 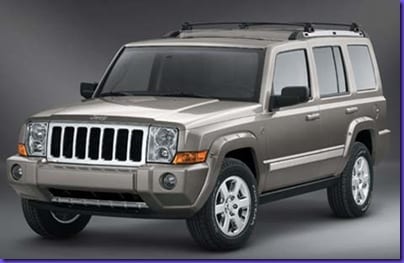 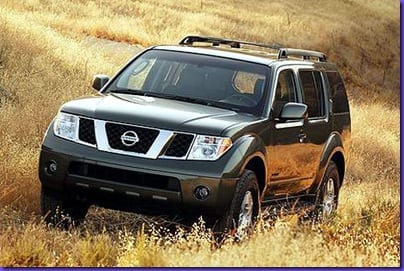 And so, with that minutia of analyzing the plight of Long Buttishness and Saggyness in the Minivan genre, what I did appreciate about the 2011 Odyssey is that it’s shape is much less Mom Jeansy.

It has a nice butt… 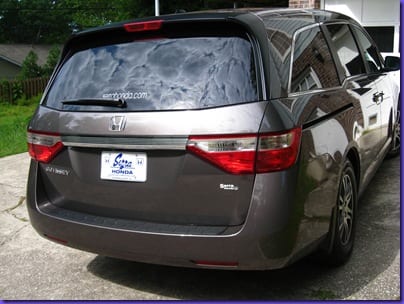 …and it has an SUV’s level of perk. 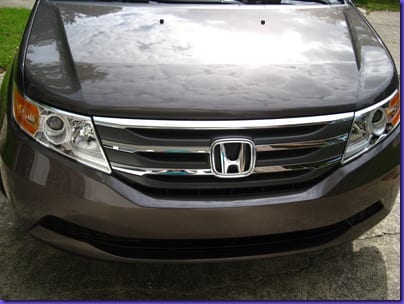 Here are a couple of things I didn’t like about it:

* Despite it’s generous number of cupholders, it did not have a cupholder within reach of a strapped-in kid.  In my Pilot, Ali has a cupholder AND a storage rectangle in the door.

(This seems trivial until you have a four-year-old drop her grape smoothie in the floorboard because she had nowhere to set it and got tired of holding it.)

* The driver’s area was much further away from the second row, making it very difficult to drive while holding Noah’s paci in to mitigate his favorite tradition of car screaming.  Once he is old enough to behave in the car, though, I might really appreciate that extra air space between us.

Here are some other things that I did like about it:

* The dashboard information panel was a geek’s paradise. 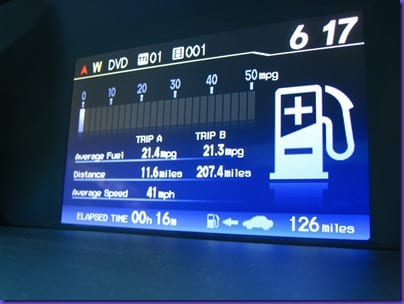 In the days before having the carry on an endless conversation about fairies and favorite colors while driving, I would actually entertain my mind by figuring my gas mileage in my head.  Now that I am not allowed that time of mental wandering, it was fun to be able to simply look up and see the glorious statistical heaven.

* That same geek-out stats screen automatically becomes a back-up camera when you put the van in reverse: 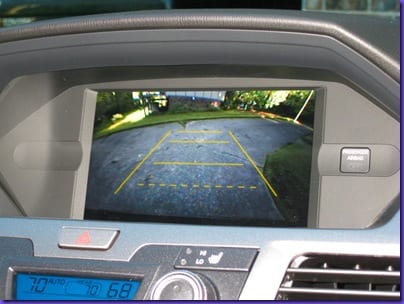 …as opposed to my Pilot, which, due to a LACK of backup camera, has a rear end that looks like this: 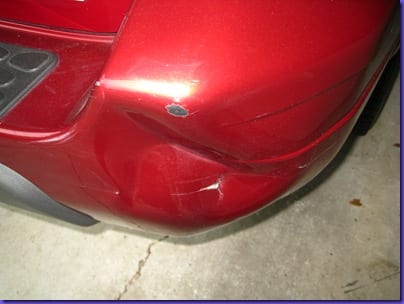 * The automatic opening and closing rear hatch.  My Pilot’s rear hatch is so heavy that it takes both arms to close it, so I can hardly use it anymore since I’ve always got a baby in one arm.  The Odyssey’s opens and closes with a click of a button.

* Instead of a sunglasses holder in the roof (which I always forget is there in my Pilot and spend 20 minutes searching for my sunglasses), it has a kid-mirror.  LOVE. 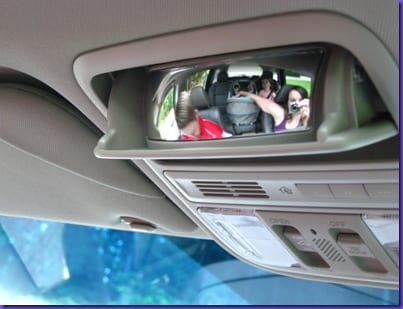 I was really hoping that the Minivan magic would extend to Noah and he would suddenly love car rides, but alas.  It was not to be.

Ali, however, had a change of heart.

After watching Tinkerbell in the car and discovering the fun buttons that open and close the sliding doors, she begged me not to take it back – Pilot Who??

But when we did return it, I think she got some superhero inspiration… 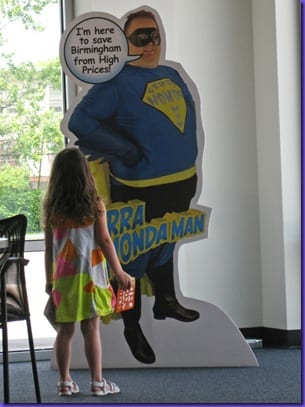 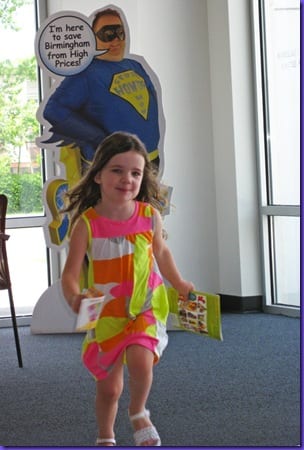 …I have a feeling that “Playing Spiderman” may be replaced with “Playing Serra Honda Man” at our house.

So. The bottom line…

Would I be able to drive a 2011 Odyssey without feeling like I lost my identity as a person?

As shocked as I am to say this, Yes.  It was cool enough that I could handle it.

Does this apply to all minivans everywhere?

No.  I definitely did not become a Generalized Minivan Convert.

Not at this point, but maybe when the kids are a little older.  A comparably-priced SUV would have a lot of the same features minus the sliding doors, and although they were nice in tight parking spaces and in the garage, they didn’t make life that much easier at this time.  I think that when both kids can get in and out and buckled by themselves, sliding doors would be golden.

Am I going to get any new vehicle right now?

No.  Until Noah learns to enjoy the art of the car ride, I’ve come to realize that my Pilot, albeit painful to get him in and out of, is the best option – because I can drive and pacify simultaneously.

But the bottom line is, Honda totally deserves props for figuring out how to overcome Curse of the Minivan Long Butt and Saggy Front End, no plastic surgery necessary.  If only it were that easy in real life…

27 thoughts on “My (Three Day) Life as a Minivanning Mommy.”