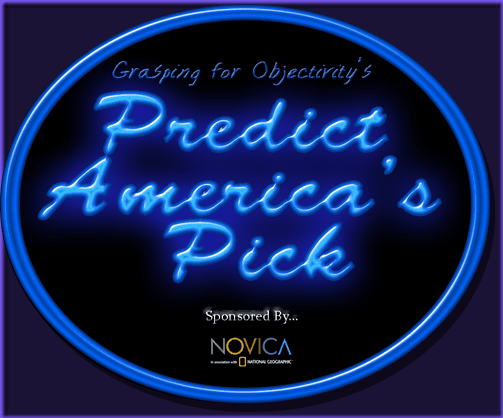 (You see, I’m telling myself that so that I don’t feel all pressurey to come up with some great, amazing, deep, insightful, and original commentary on American Idol, the practice of watching television, or of life itself.)

(Not that I ever do, but I always feel the pressure to do so.  But not today.  Because it’s Saturday.)

Since there was no elimination last week, I didn’t update the leaderboard.  And since there were two eliminated this week and they didn’t indicate which had the lower votes, for purposes of scoring, I ranked them both as “11.5”.

I know you really probably don’t care how I managed to make my geeky spreadsheet work out, but I felt compelled to share.

So without further ado, attempts at witteriness, or anything else that’s just not going to work out because it’s a SATURDAY, here’s the leaderboard: