Last week, we went to Aldridge Botanical Gardens with Ashley, AJ, and Tessa.  We had a lovely time letting the kids run around the gardens, eating lunch, and feeding the embarrassingly large mound of stale bread I had to thousands of fish, dozens of turtles, and one oddly alone Canadian Goose. 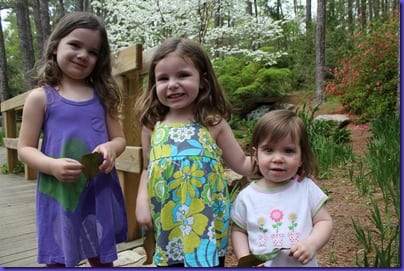 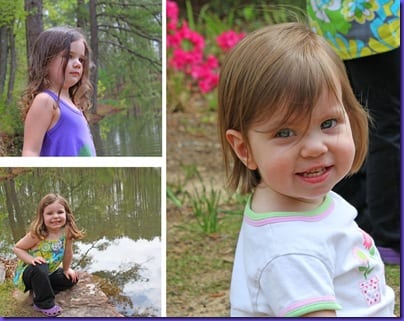 I ALWAYS end up with shadowy eyes. Drives me crazy.

But none of that was the point of this post.

Along with Bachelor Goose, Turtles, and Fish, we saw other forms of wildlife, too: 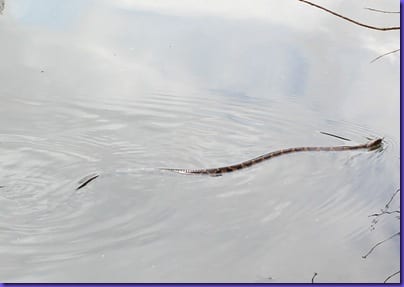 And, I’m afraid, I brought a piece of the non-savory variety home with me.

That afternoon during the kid’s naptimes, I was taking a quick break – a.k.a. laying in bed in a completely vegetative state.   When all of a sudden, I felt a biting on my right arm.

I looked at my arm and didn’t see a culprit – must’ve been an itch.

But then the sensation of being eaten got more intense.

I looked closer.  And I saw him: a ridiculously tiny, but scarily strange looking bug, his butt up in the air, boring a hole right through my forearm.

I flicked him off onto the floor in a panic, then stared at my arm.  Quite a large portion of it was pink and growing rapidly to have been such a tiny bug’s meal.

I started thinking about how odd he looked…

What if he was some bizarrely rare poisonous bug?  What if Chris came home to Noah screaming his head off and Ali saying “CAN I GET UP NOW?!?!?!?!” for the 1,382nd time because I’m passed out on the floor?  Then what if this poisonous molecule of a creature somehow managed to find his way to my now motherless children and bit them as well?!?

I must find the bug.

So I got down on my hands and knees on the carpet, expecting quite a search for such a tiny bug.

But alas, luck was with me.  I found him right before I passed out.

Okay, I didn’t pass out.  But I did find him and locked him away in a ziploc bag, then tweeted Chris to let him know where to find the culprit should he come home to a passed out wife, a screaming baby, and a kid that is begging tirelessly and repeatedly to get up from her nap.

I managed to hold onto my consciousness and actually somewhat forgot about my guest for the whole evening.

But during the night, my arm began to itch and hurt mercilessly, so I had dreams…

….about that bug and thousands of it’s cousins on our bedroom ceiling and dropping down onto me…

…about that bug and it’s girlfriends all up in Noah’s formula canister and bottles (apparently that dream was a mixture of bug + nursing woes puréed together in mushy sleepy mix).

So the next morning, I checked up on my prisoner.  Who was miraculously still alive.  I photographed him and put him up on Facebook to crowdsource his identity… 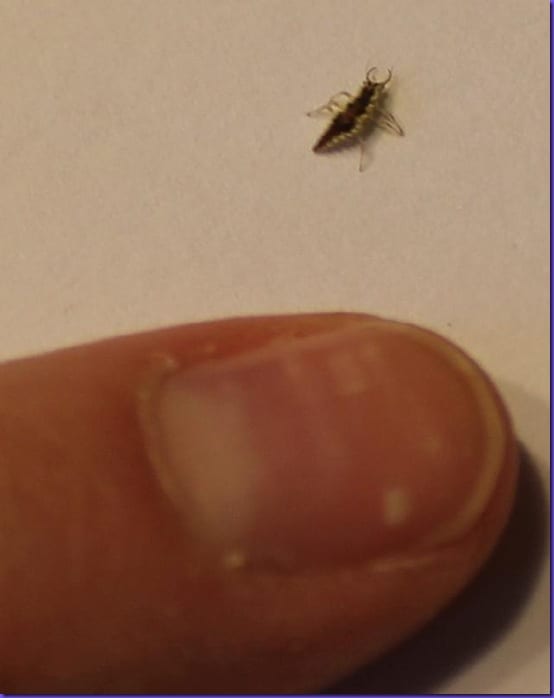 …and, in the process of trying to make him HOLD STILL for the camera (he was a very quick little menace), I accidentally smooshed him dead.

(Hopefully I never do that with any other photography subjects.)

I got a few identity suggestions on Facebook, but no sure responses.  My Mom, who was the Audubon Field Guide

QUEEN when we were kids, didn’t comment, much to my disappointment.  So at lunch on Sunday, since I was still itching and therefore thinking about my deceased feaster, I asked her if she looked up my bug.

“Yes, I did.  And the closest thing I could find was definitely a poisonous one, but also a rare one – a Mexican Bed Bug.”

I choked on my Arby’s Roast Beef.

“You mean maybe he DIDN’T come from Aldridge Gardens and, since I was laying in my bed when I found him, my bed is infested with [double choke] a rare, poisonous, Mexican BED BUG?!?!?!?”

“Well, but he didn’t look JUST like it – it was just the closest thing I could find..his head was the wrong shape.”

But what if I have an even RARER MUTATION OF THE RARE MEXICAN BED BUG???!!!

I’m itching all over as I write this post.  Literally.

Obviously, this mystery must be solved.  I’m searching the internet as I type (I’m multi-talented like that), but not finding his identity.   But I am unbelievably relieved to report from my firsthand observation of Mister Mystery that he was NOT a Mexican Bed Bug: 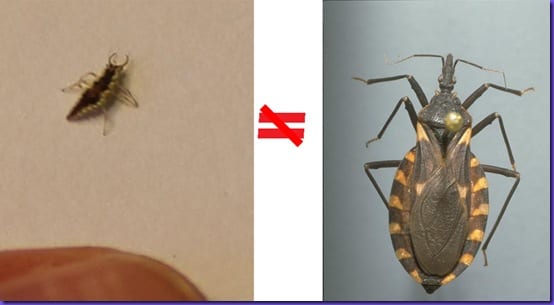 Which means that SURELY he was just a nasty creature whose natural habitat is Aldridge Gardens who hitched a ride in my hair and just happened to get hungry while I was lying in bed.

But so that I can fully relieve my stressed out mind and eaten off arm (that IS still itching like crazy), all help in figuring out what I was eaten by is greatly appreciated.