I have never made my personal distaste for the minivan a secret.  Nor have I hidden the fact that I desperately long to be able to take advantage of the awesome minivan superpowers – just without the sinking feeling that driving a minivan would inevitably cause in my soul.

When we added Noah to our family, my desire for an easier-to-use vehicle became even more intense.  As much as I liked my Honda Pilot, getting two kids + infant seat + kid stuff + groceries + myself in and out was beginning to age me faster than driving a minivan would.  And the heavier he gets, the more painful it gets – my poor shoulders need a massage every single night.

The closest solution I’ve found to what I really want, which is the mythical and as-yet-non-existent SUVan – was, as I shared last year, the Ford Flex. 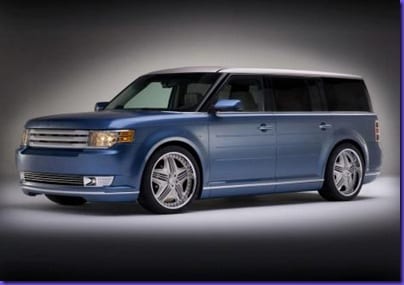 (Which almost every one of you hated with the same amount of passion that I despise the minivan.)

I believe you all used words like “Box on Wheels” and “Stationwagon” – but you that’s just because you’re not seeing it’s British Characteristics.  It’s totally the Mini Cooper’s Baby Daddy – a Maxi Cooper. 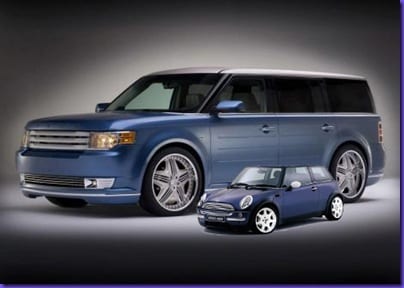 Also? Because of the Kia Soul commercials with the Hamsters car-dancing in the boxy little Kia, every time Chris and I sit in the also boxy Flex, we simultaneously begin bobbing our heads rhythmically and imagining that we’re hamsters with an odd resemblance to Eminem. 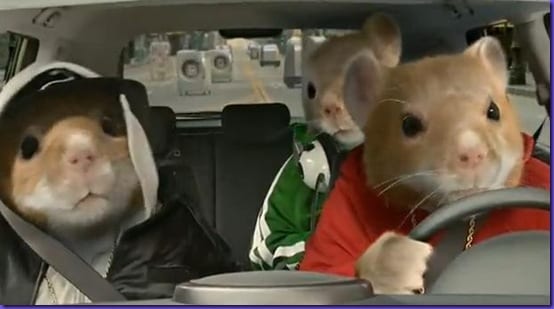 And really, who doesn’t want to pretend to be a rapping hamster?

But my love for the Flex came with three unconquerable problems:

2.  As I said, everyone hates them but me.  Which means that there are very, VERY few used ones available.

3.  They just came out in 2009 and are ludicrously expensive, so even buying a used one was way more than I wanted to pay.

So the Flex got shelved in my “impossible” file.

And after I resigned myself to the death of a dream, I resumed my whining on Twitter for Honda to make a true SUVan.

And because of my incessant whininess, the one and only Serra Honda Man himself issued me a challenge.

Who is the Serra Honda Man?

Here’s an introduction – and if your curiosity is killing you after the first installment, many more episodes can be found on YouTube.

I would say I know him in real life, but that wouldn’t be accurate.  Like Spiderman, he keeps a low profile when in superhero form.  But I DO know his altar ego – who happens to be the General Manager of the same Serra Honda.

At any rate, he issued me a challenge: drive a 2011 Honda Odyssey for THREE DAYS and still be able to honestly say that minivans make me feel old. 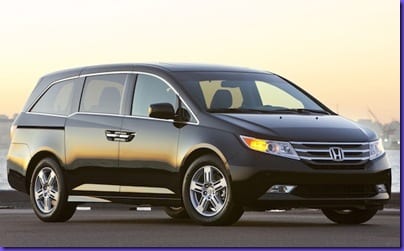 Although I feared that my core beliefs about life might be shattered, I accepted his offer.  And so, I will be driving a brand new, with that awesome new-car-smell, 2011 Honda Odyssey from Wednesday through Saturday.

And then I will tell you what happens to my grasp of reality – if anything.

Will I stand behind my firm beliefs in the need for an SUVan and hatred of the minivan?

Or will I crumble to the temptation of magical sliding doors and kid-helpful minivan superpowers?

Will the Odyssey make me feel like a Hamster with Rhythm too?

Or will it make me instantaneously age by 10 years as I’ve always feared?

What do you say?

Disclaimer: This is not a review, a promotion, or an advertisement for Honda, Serra Honda, rapping hamsters, Ford Flexes, or even the Serra Honda Man himself.  I am not being compensated in any way, but am simply risking my understanding of life in the name of science and blogging.