There’s something about having a baby and the following attempts to regain a not-sharing-with-another-human body that makes one want to change things up a bit.

You know, like put on makeup even if one is NOT leaving the house.  And wear clothes that aren’t two sizes too big.

And especially try something new with one’s hair.

The closest I’ve ever come to dying my hair was a demi-permanent sorta-haircolor  – that was the exact same shade as my natural hair.

But since I’ve been feeling CRAAAZY, I decided it was time to really dive in.

I called my normal salon and asked how much it would cost to highlight absurdly long hair.  After recovering from my near stroke, I decided I might be too practical to get CRAAAZY after all.

Then I remembered that my friend Ashley had a good (and very affordable) experience at one of the teaching salons in town.

I looked it up, and sure enough, it was going to be about a fourth of the price of my salon.

I made an appointment.

And I started a downward spiral into complete and utter nervous hysteria.

I ALMOST cancelled, but I managed to pry my fingers from the phone.

So I showed up at the salon, feeling very guilty about cheating on my normal hairdresser.  She has long, dark hair like me, so I feel like she knows how to cut and style my hair from personal experience.

Maybe my student hairdresser will have long, dark hair…

As I was in mid-thought, my student hairdresser walked up.

And she looked like a deer in the headlights.

I mean – she really looked like a deer.  She had huge doe-eyes, skinny stilt legs, and looked like she was going to bolt off into the woods if I looked her in the eyes.

Deer took me back to her chair, and we began to talk.  I showed her a picture of what I was thinking, and she headed off to find her instructor.

Which gave me ample opportunity to stare at myself in the mirror and completely second guess my the choices that landed me there.

And, of course, I was having an AMAZING hair day – like, the best in ten years.  Why screw it up??

Apparently, Deer had never done this procedure before.

The instructor showed her how to do it, and Deer began her work.

When I finally felt comfortable enough that I had made enough small-talk to make my concerned question seem a BIT more casual, I asked Deer how long she’d been in school there.

A year – she was 18 days from graduating.

I spent the next few minutes imagining how frightened she must have looked on her first day.

I also asked her how the school worked – did she get paid for cutting my hair?

Nope – she pays tuition for the privilege of cutting my hair, and I pay the school to let her.

After three hours of foiling, waiting, and rinsing, she began to dry my hair, and I began to notice streaks of what appeared to be Pamela Anderson’s hair mixed in with my dark, dark, dark brown hair.

Not EXACTLY the look I was going for…

The instructor came over.

She watched for a second.

I watched her watch.

Then, she ever-so-tactfully said to me, “Did you know it’s ALWAYS easier to darken than to lighten? It’s totally worth an extra fifteen minutes to get your hair the way it SHOULD be than for you to wait and get it corrected the next time you come in.”

After the drying was finished, me, Deer, and Instructor inspected my hair.

I strongly resembled a Zebra.

Deer looked at Zebra.  “I think I might have rinsed out the toner* too quickly.”

And so Deer began to reapply toner to Zebra.

Rewashed, redried, restyled, and I once again resembled a human.  Nearly four hours had passed since I’d met Deer.  Or four years – it was hard to tell.

But besides the day killing and the temporary species change, it was definitely a worthwhile experience, and I’ll probably go back again.

(Especially since I feel too guilty to go to my normal hairdresser with the evidence of cheating all over my head.)

So now, the Results: 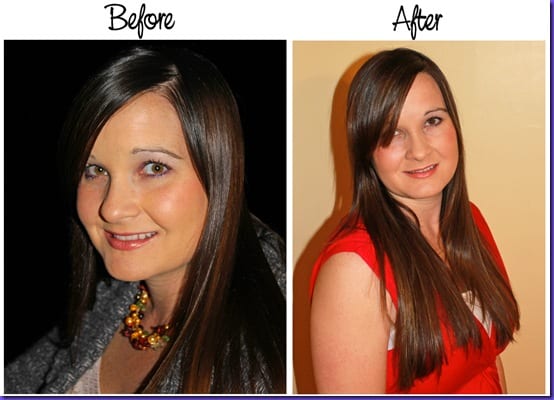 Err… hard to see in a photograph.  But they’re there – I promise!

It’s easier to see with the top layer of my hair pulled back: 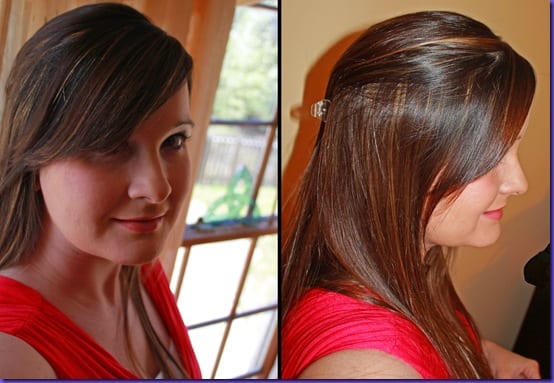 And that, my friends, is this week’s CRAAAAZY.

* Being that I’m a hair coloring ignoramus, I had no idea what toner did.  According to Wikipedia, it “corrects or deemphasizes unintended hair coloring outcomes.”  Thank GOODNESS Zebras can be deemphasized**.

** The author does not discriminate based on species, but does prefer to remain in the species in which she was born.

34 thoughts on “In Which I Became Student Work.”