As always, Ali and I had to watch Miss America last night, also known as “The Princesses of the States” – which were thankfully much more classy Princesses than the last pageant we watched.

Besides my fast forwarding through the unbelievably-looking-like-bra-and-panties swimsuit competition (really, there ARE ways to make bathing suits so that they don’t look like lingerie), Ali, as always, enjoyed the Princesses.

From the very beginning when they all introduced themselves, it was high quality entertainment.

“From the largest producer of Ethanol, my state gives you gas!! I’m Miss Iowa!!”

“From the state with the most Dunkin’ Donuts per capita, I’m Miss Rhode Island!!”

“From the state that touches more states than any other, but never inappropriately, I’m Miss Wyoming!!”

(Which, by the way, Miss Wyoming needed to do her research – Wyoming touches six other states, while Tennessee and Missouri each touch EIGHT other states.  Even Ali could have helped her with that fact..)

There were a few other introductions that were notable…

The cheesiest: “From the state that means colored red, I’m tickled pink to be here!! I’m Miss Colorado!”

The most ironic: “From the home of the Biggest Loser, I’m Miss Mississippi!!”

The You-Coulda-Surely-Thought-of-a-Better-State-Characteristic-Than-That: “From the state that brought you everyone’s favorite store, Target, I’m Miss Minnesota!!”

There were, of course, other moments of awesomeness, such as when they asked all of the women, in their matching-teeniny-barely-covering-their-butts-silver-mini-dresses to sit on the couches on the stage, which all of two of them obeyed, while the rest stood around awkwardly trying to figure out how to manage to do such a thing without flashing America in Britney-Spears-Getting-Out-Of-A-Limo fashion, and Miss Oklahoma’s quote from the interview portion, “EVERYONE can be Miss America in how they conduct themselves everyday!” (which thrilled Chris to the core – that even HE could be Miss America!!!), but the best moment of the night was Miss Arkansas’ talent. 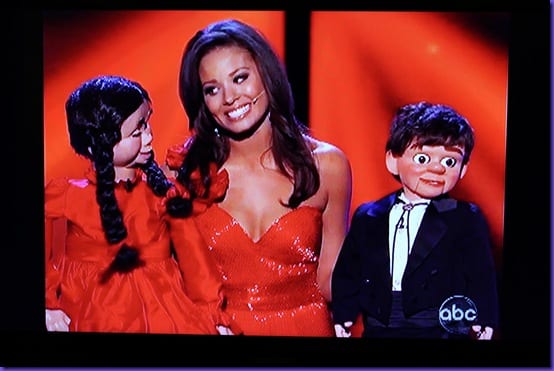 Oh yes, she did ventriloquistically YODEL during her hit number, “I Wanna Be a Cowboy Sweetheart.”

AND, with a talent like that, who could blame the judges for awarding her the title of first runner-up??

Ultimately, though, I made sure that Ali understood that there are TWO ways to get to the Miss America competition.

You can either go the “Toddlers and Tiaras” way, complete with spray tanned babies and getting your eyebrows waxed at the age of five…

OR you can become a geeky accountant like your Mommy, get a job with Ernst and Young, and be an official Miss America scoring tabulator.

And, if I know my daughter, she will choose geekily counting things over eyebrow waxing ANY day.