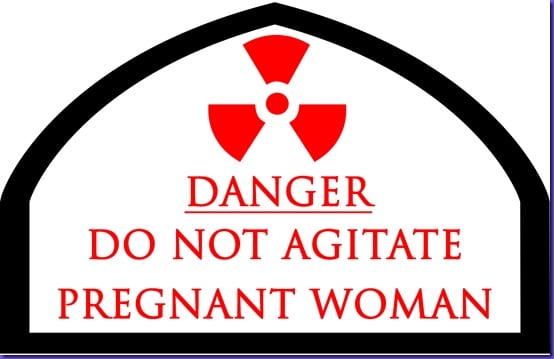 I had my last doctor’s appointment yesterday.  You know, the one where my doctor promised to do The Procedure to help me go into labor.

So, after my appointment (which did not make me feel very hopeful of labor at all), and after I checked out without setting another appointment (which was a bizarre feeling), I went out in the hallway and sat down to call Chris and give him The Appointment Download and try to get a bit cheered up before I got on the elevator.

So there I am, sitting rather uncomfortably from The Procedure (albeit not as uncomfortable as I’d heard I’d be…which may explain why I’m still sitting here typing and NOT IN LABOR), talking to my husband and completely minding my own business.

Then this other lady walks out of my OB-GYN’s office.

After pushing the elevator button, she unnecessarily crosses the hall, walks right up to me, gets in… well, not my face – gets in my belly’s face if it had one – and starts oohing and aahing loudly.

I look at her with a forced-yet-slightly-polite smile and try to motion that I’m on the phone.  Trying to HEAR over her belly-cooing.

Then, her two friends come out of the office.

(And, by the way, who goes in groups of three to the OB-GYN office?? It’s not quite like going to the bathroom together.)

Anyway. So her two friends come out, and she calls them over and loudly points to my protruding abdomen.  “LOOK AT HER BELLY!!!!”

Then they all three come over and start talking loudly about my condition and just barely preserving their lives by choosing to not quite reach out and touch my belly, although I could literally feel the magnetic draw of their desire.

First of all.  I cannot POSSIBLY be the first pregnant woman you’ve ever seen.

Secondly.  You just walked out of an OB-GYN office.  Over 90% of the women in there look JUST. LIKE. ME.

Thirdly.  I am ON THE PHONE.  Carrying on a CONVERSATION.  Trying my absolute best to ignore you.

Fourthly.  Go home and Google a blog post called “How to Act When They’re Expecting.” I’m pretty sure you were exactly who I was writing about.

I AM NOT HERE FOR YOUR FREAKISH VISUAL ENTERTAINMENT.

They continued carrying on an entire and quite detailed conversation about my apparently bizarrely pregnant state until finally, after what had to have been nine months of stranger torture, their elevator arrived.

Never before has an Elevator saved the lives of three women AND an iPhone, which was about to be used as a flying weapon of destruction.

Is there an app for that?