My Mom, who directs the Cubbies program at our church, decided to be a little overly ambitious this year.

She decided to put on an entire Christmas play, as acted by about 20 three and four year olds.

(She told me of her grand plans right after telling me that they usually cry at just having to sing songs at their annual Christmas party.)

Also, they would only have a chance to practice their play exactly one time before the performance.

The week before the certainly-ill-fated play was their practice week.  On the way home, I asked Ali how it went.

“It was fun.  I’m an angel.  And Nathaniel was King David, and he got to wear a GOLD CAPE that made him fly!!!”

“Wait a minute…King David is in your CHRISTMAS play?”

My mind wandered from Ali’s monologue as I tried to figure out: Where exactly did Mom decide to START the Christmas story??

At this point, I SERIOUSLY started to doubt my Mother’s sanity.

…But I sadistically looked forward to the night of the play.

The parents all arrived and took their seats…

And then, just to make things a LITTLE more explosive interesting, Mom had the two year old class brought in and sat on floor directly in front of the play. 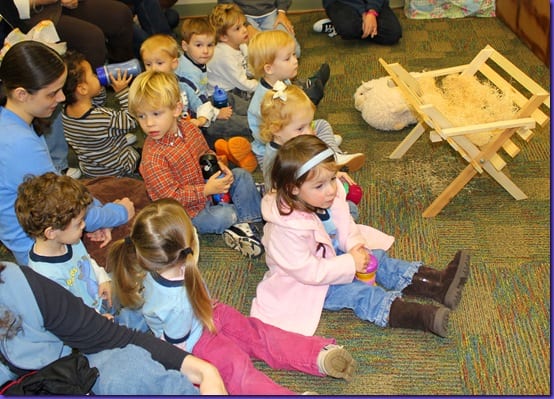 …Because two year olds are MOST patient and would NEVER cry … or interrupt a Christmas play … or steal Baby Jesus right out of the manger.

This was going to be fun.

And then it began…the Cubbies were brought in and arranged in order of their sequence in the play, which of course was quite a simple task… 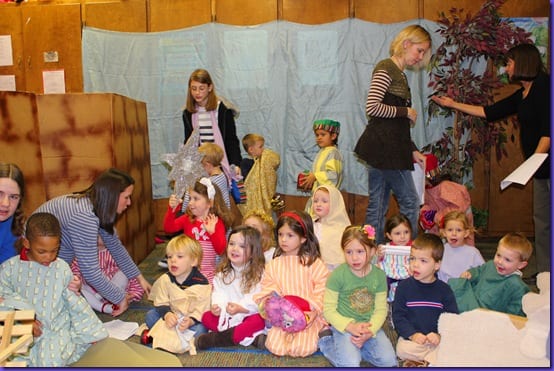 And finally, all lined up and, oddly enough, none crying (and only a few picking their noses), they were ready: 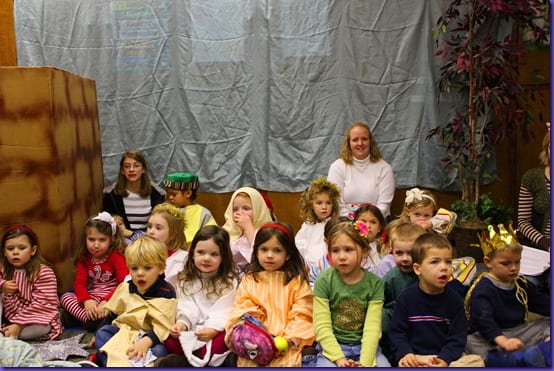 And then it started.

Not with Mary, mind you.  Mom’s too thorough for that.

It started with Adam.  And Eve.  And the Snake. 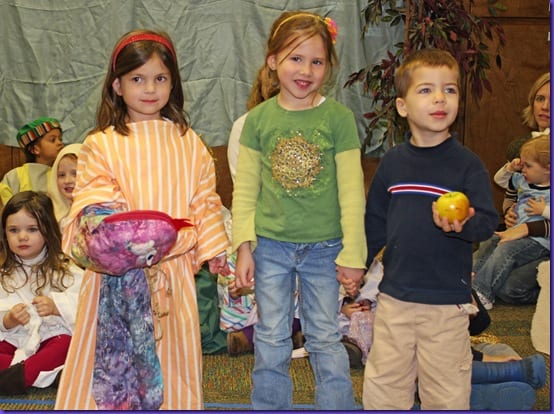 And she didn’t just breeze through that part of the story –  after eating the fruit, they got clothed in animal skins, 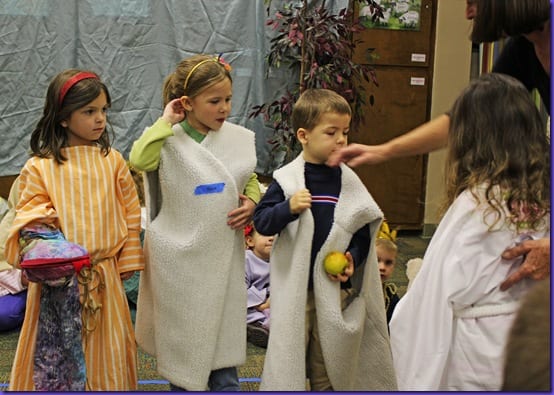 And then Ali, in her debut acting role, excitedly and zealously banished them from the garden with her flaming foam sword. 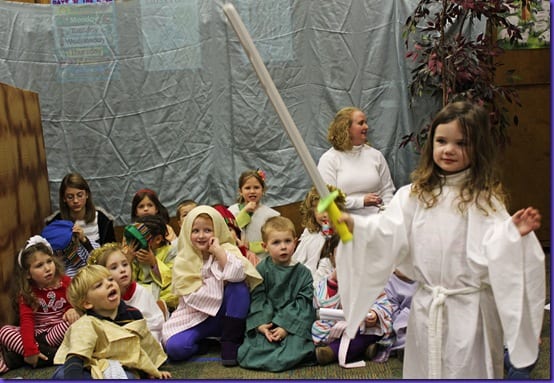 Then there was a rather pleased-with-himself Abraham, 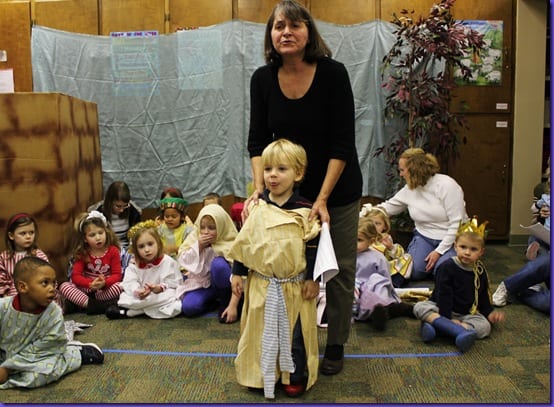 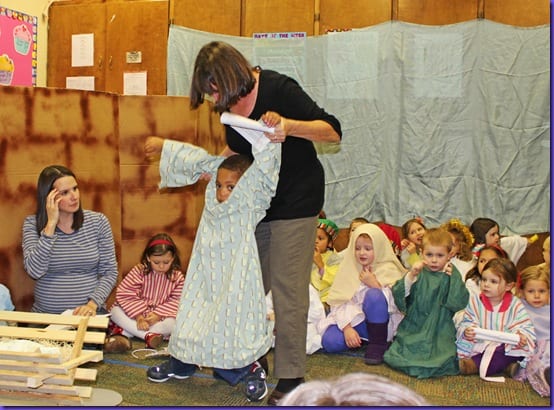 And then the long-awaited arrival of the stately King David in his FABULOUS flying gold cape: 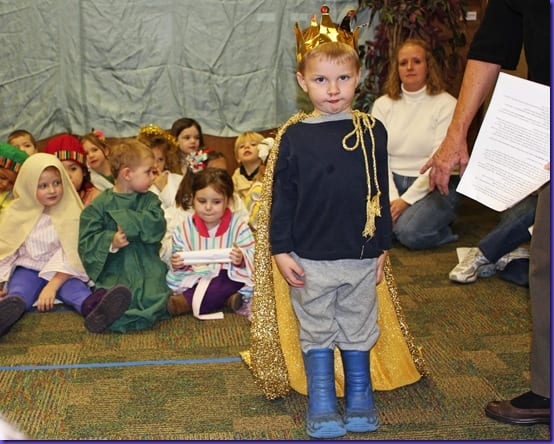 (Apparently, King David did a lot of puddle-jumping in his day as well.)

And finally, after hitting all the major and minor prophets (I think she did breeze right by the books of Nahum and Habakkuk rather unfairly, though), 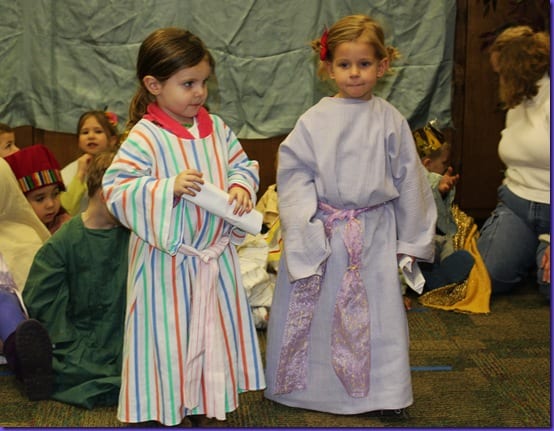 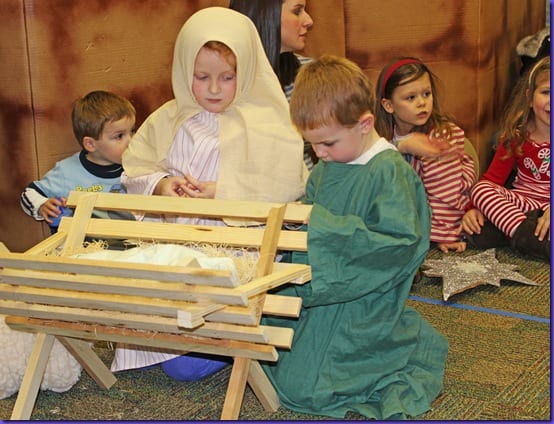 Which, of course, included a star, a fabulously adorable shepherd, 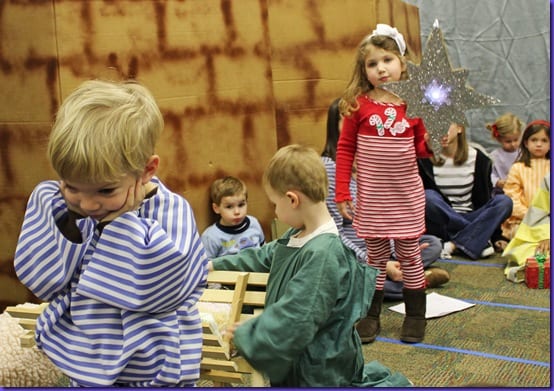 The angel and the Wise Men, 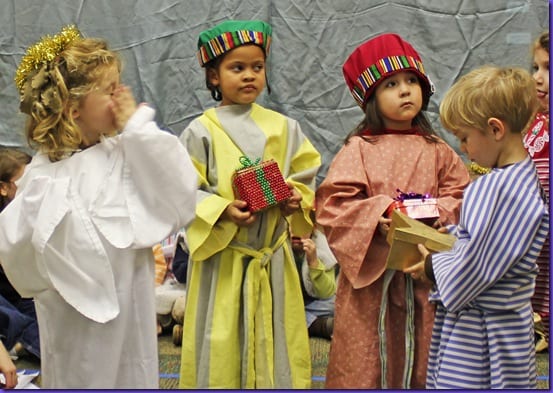 And finally, the whole cast gathered around the manger and worshipped baby Jesus.

Except for Ali, who was wholly too consumed with jealously worshipping that fabulous gold cape: 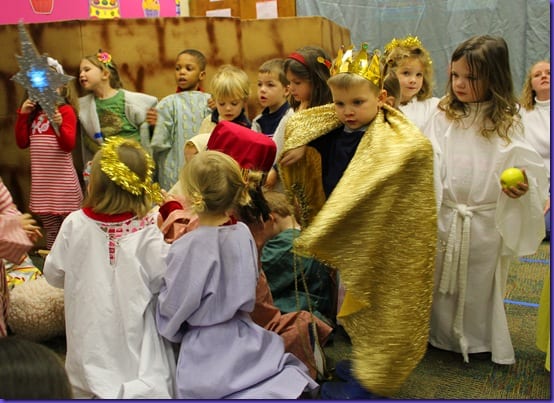 But I have to give it to my Mom: she might have seemed overly ambitious in a colossal way, but somehow, in what most certainly HAD to have been a Christmas Miracle, she pulled it off – without a single tear shed, Baby Jesus dropped, or gold cape ripped off in a fury of jealousy.

16 thoughts on “The Rising Stars of the Christmas Story.”