We have a new Christmas store in our mall this year, and it has every type of Christmas ornament that you could ever desire.

And so, for a three year old little girl who absolutely adores Christmas, it’s the funnest toy store in the whole mall.

But despite the glittery fairies and the pink princesses and the Doras and Diegos, there’s always one ornament display that Ali looks for before any of the others… she’s absolutely obsessed with the Barack Obama ornaments. 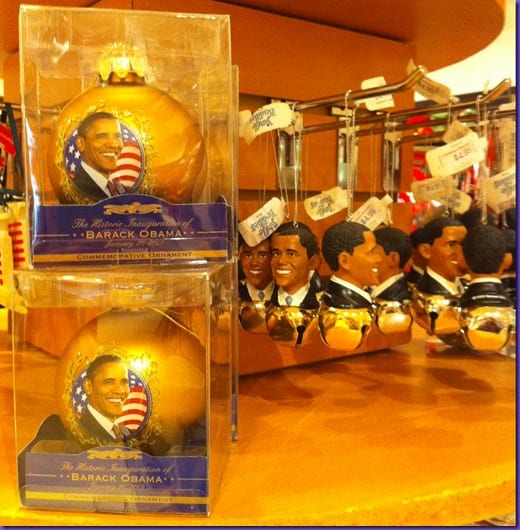 I’m not sure if she prefers the sparkly gold ball ones or the jingly bell ones (in case you’re wondering which to buy her), but she’s definitely a fan.

And really, what is a more classy way to celebrate your president than sticking an overly goofily-toothy grinning bust of him atop a bell, and hanging it on a slowly dying tree?

Personal political feelings aside, I really feel sorry for Barack every time we visit him in all his bellish glory.

But, as bad as those are, I’ve noticed a startling trend this Christmas… poor Barack is being sold on everything and in every form.

I don’t remember this type presidential gifts in the past, other than a set of rather distasteful Bill and Hillary figurines, but really, Bill more-than-kinda brought that ridicule on himself.

But Obama – there’s something about him that’s really gotten ahold of the merchandise hockers.  And, since politicians have no rights over their images like the rest of us (I guess due to that whole free speech thing), there’s really nothing he can do but join in.

..Which makes me think that there’s a Christmas tree somewhere in the White House decorated with nothing but ObamaBells.

At any rate, since ObamaGifting is apparently the thing this year, I figured that SOMEONE needed to offer an Obama Gift Guide, and so that’s what I’m here to do.

The following is a countdown of my FAVORITE Obama items (aside from the ornaments above, of course), all of which can be found on Amazon, if you are so inclined to purchase..

These come in a variety of options, including the standard, serious one, 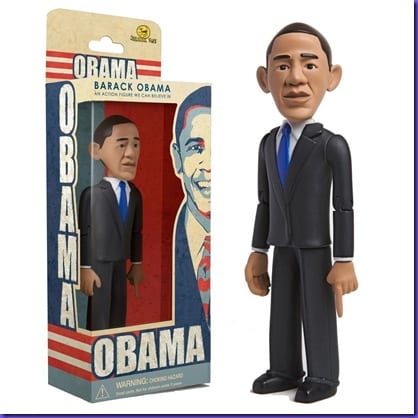 The gold-suited “Inaugural Edition” (which, according to it’s description, “has eight points of articulation”.  I’m not even sure what that means),

(It would have been pretty cool if he’d worn a gold suit to his inauguration, but alas…)

Or the square-headed one, coming in both personalities: President Obama and Super Obama: 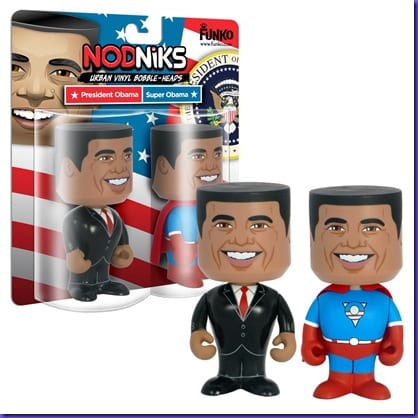 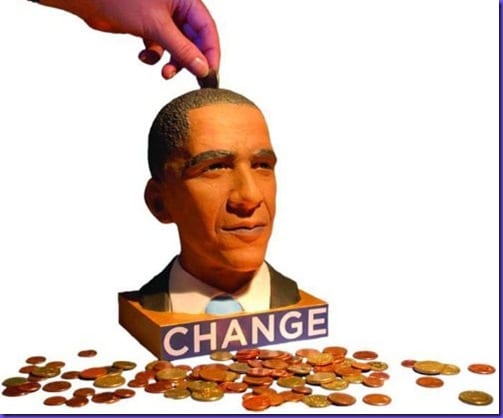 …So that you can see for yourself all of the change that Obama can contain in that head of his.

8. The WWOD (What Would Obama Do) Answer Card. 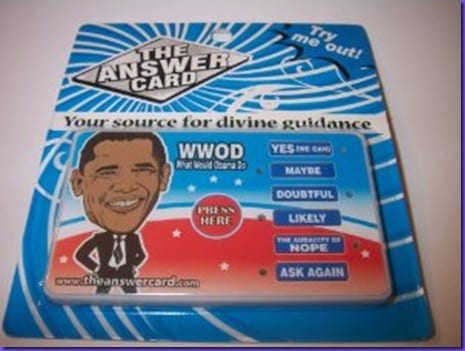 …in case your Magic 8 Ball finally gave out. 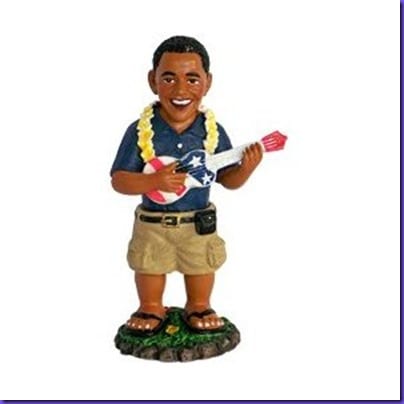 I’m pretty sure they fashioned this doll after some of the pictures from Barack’s Hawaiian vacation a while back, but, based on the tabloid pictures, I was almost SURE he had his shirt off that entire vacation, so I’m not positive…

In case you were hoping to tell what side he was on based on the color of his lightsaber, good luck – it’s purple: 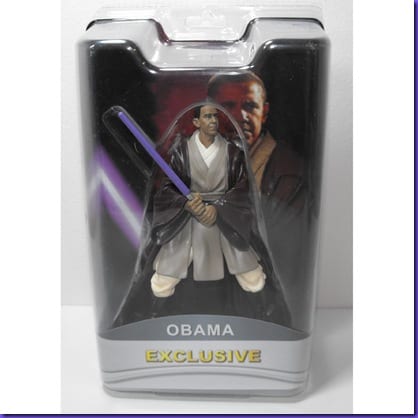 You can get the very formal Campaign Edition, 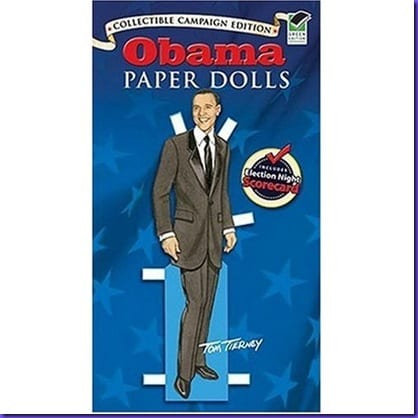 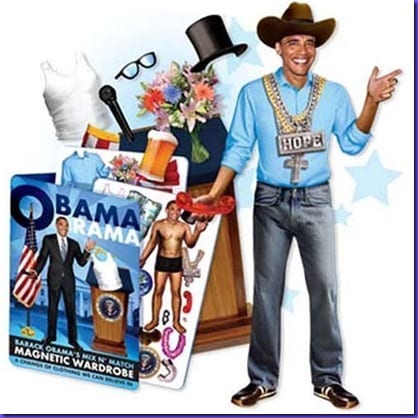 Or, my favorite, the Barack and Michelle set – which starts ‘em out in their skivvies like ALL proper paper dolls. 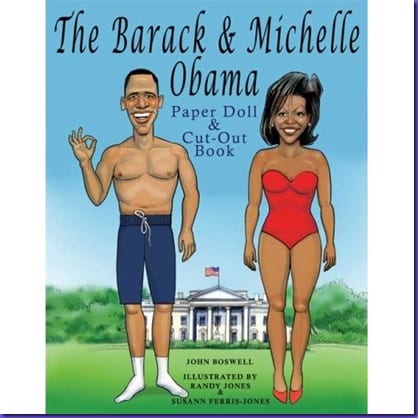 This is the gift to get if you’re looking for the classiest (ahem, most expensive at $60) ObamaGift.  These are made in Russia in traditional nesting doll format, and my favorite part is that they even included The Dog as the centermost soul of the Obama Nest: 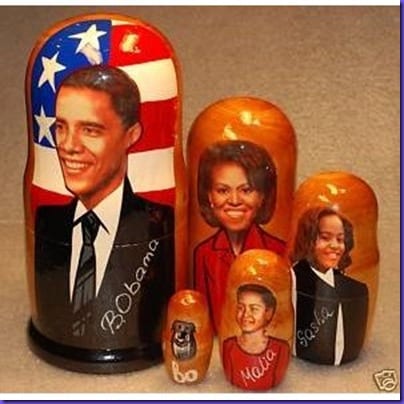 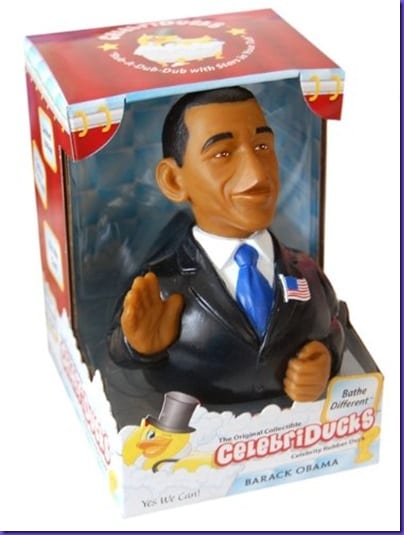 but lest you think that duck-nose is the most offensive defamation of our President’s face, there’s always…. 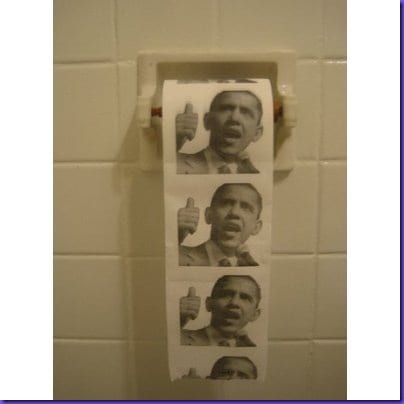 Is the Thumbs up really necessary?

And, finally, my favorite Obama Gift of the Season…

Which can, much to my delight, be bought in two options. 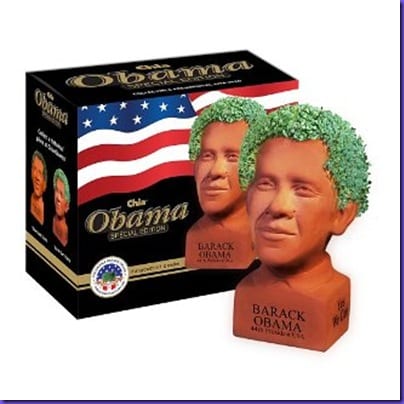 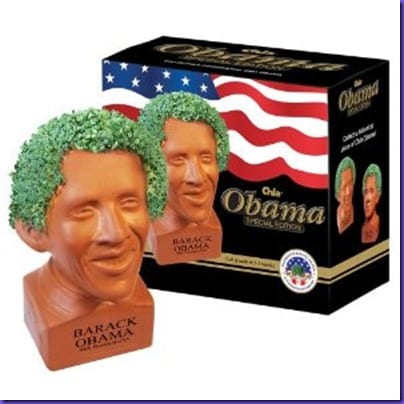 And if that expression is any indication, I think I have a pretty good guess as to what herb is growing out of “The Happy’s” head.

Happy Shopping, and may your tree be full of ObamaBells.

20 thoughts on “I’ll Have a Presidential Christmas…”