And being such, nothing confounds me more than things that SHOULD be scientific actually being ridiculously confusing and conflicting.

…which means that all methods of pregnancy calculations drive me mad.

First of all, the whole count-from-two-weeks-BEFORE-you-conceive thing. It’s an amazing feat of nature that on the day you conceive, you’re already magically two weeks pregnant.

(If husbands pondered THAT deep thought more often, they might live a bit more scared for their lives cautiously.)

…but you won’t find us women complaining too much about that one because it really just means that there are two less weeks that we ACTUALLY have to be pregnant.

Second ridiculousity. 9 months? 40 weeks does not compute into 9 months, whether or not you add in those two magic weeks. Using a 30-day-a-month average, 40 weeks is actually 9.33 months – a number no pregnant woman EVER wants to see.

And my biggest peeve, the calculation of how many months pregnant one is at any given point. No one can quite agree on HOW you calculate this mysterious number. It would seem to me that if I’m due on December 27th, then four months before that, which would have been August 27th, I was five months pregnant, making me about 5.25 months pregnant now.

But there are many pregnancy resources, including my nifty-little-iPregnancy app, that assume (very illogically) that a “month” is four straight weeks, so therefore, at 24 weeks, I am actually SIX months pregnant: 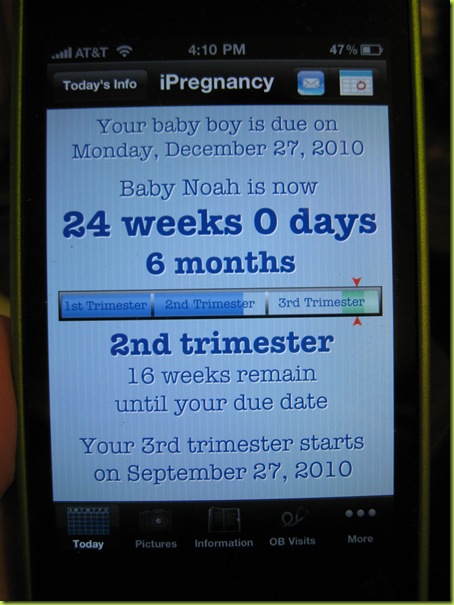 BUT. If I’m six months now (and I can’t help but do the rest of the math because I’m an accountant), then that means that I’ll be pregnant for TEN GRUELING MONTHS.

So there’s just no winning.