Our Church does the AWANA program – similar to Scouts, except you get your badges by memorizing bible verses. I went through the program as a kid and absolutely loved it, and so, of course, I’ve been hyping the utter amazingness of it to Ali.

Plus, my Mom has been the director of the Cubbies program (AWANAS for 3 and 4 year olds) for years, so Ali had the added excitement of looking forward to being in Gramamma’s class.

AND being the teacher’s pet, obviously.

My first clue of the revolt that was to come was the night that we picked up her books and vest. I needed her to try the vest on for sizing, but she rejected that idea with a ghastly horror equating only to being asked to let an alligator use her for a chew toy.

The next morning, it was time to start learning her first verse. Of course, the verse was greatly shortened with a dozen groups of ellipses, so it was all of seven words long. Plus, she’s memorized every single bit of (quite lengthy) dialogue on her Tinkerbell Leapster game and recites it every time she plays, so I know she’s capable of one ellipsis-filled bible versette.

Again, absolute and utter refusal to participate in any way.

And what do you do with that? “You’re being punished for refusing to memorize your bible verse?”

It’s as if kids have this amazing sixth sense of “Things That Mommy Would Feel Guilty Punishing Me For” and choose THOSE things to stonewall on. They never do the easy things, like, say, hitting their Mothers. Or throwing the cat (only I did that as a kid). They always wait patiently to rebel on the tricky ones, like refusing to learn the BIBLE.

Finally, with the help of some bribery in the form of candy and a singalong version of the verse (accompaniment provided by my masterful music-writing skillz), we began to make progress. But it was slow…and tedious. And she refused to say it above a whisper.

I dreaded when it came time for her to say her verse to a teacher.

Finally, it was the night of the Cubbies Premier. Because when it rains it ALWAYS hurricanes, she HAD to have the nightmare of nightmares RIGHT as she woke up from her nap, which was RIGHT before we had to leave for Cubbies.

Tears. Gnashing of teeth. Not wanting of anything, including any and all bribery and ESPECIALLY anything to do with Cubbies.

(Just my luck, her nightmare was probably about Cubbie bear himself.)

Finally, I calmed her down enough so that I could hurriedly get ready and we’d only be marginally late…

Then it came time to put her vest on.

…which made her official “First Day of Cubbies” pictures JUST as I’d always imagined them: 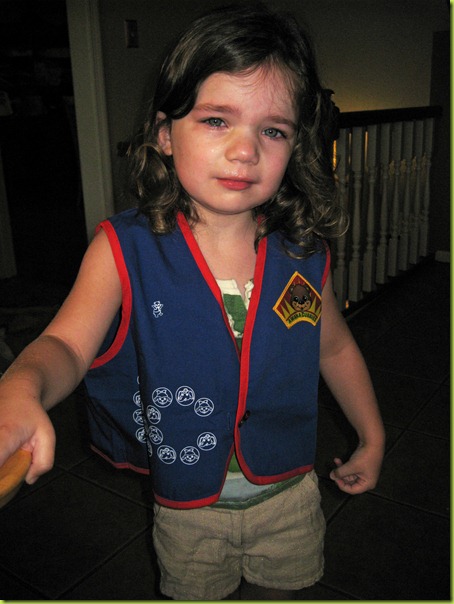 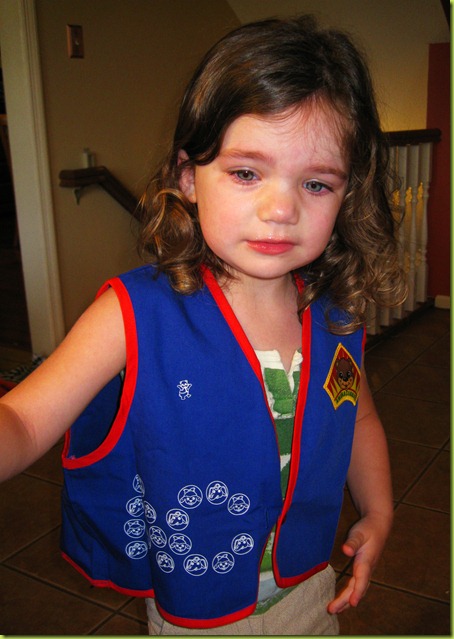 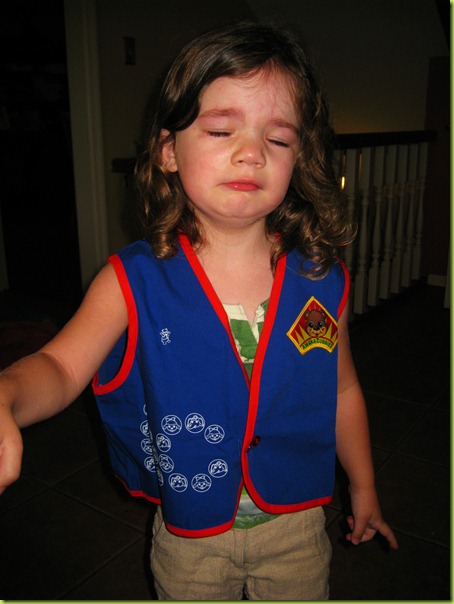 (Of course her vest is ginormous on her because she wouldn’t let me try it on that first night, which really adds to the whole effect.)

So finally, the tears subside AGAIN, and we head to the car to hurry AS FAST AS POSSIBLE to Cubbies.

And the gas light comes on.

After delaying our journey yet again at the gas station, I begin the Talk-Up Process.

Ali, always being the practical one, worriedly said, “But we won’t have TIME for all that!!!”

“Oh but you will. Cubbies is a magical place.”

“No, I promise to come back and get you.”

I deliver her, surprisingly happy (if not a little bit wary), into the arms of the unsuspecting-of-her-meltdown-over-Cubbies-issues teachers, who also happen to be my friends.

Or were about to be my former friends.

But I was right – Cubbies IS a magical place. She of course had a stellar time, actually SAID her verse (or my friends had mercy on me her and signed off on it anyway), and, on the way home, asked the question to brought peace to my heart…

13 thoughts on “A Chronological Tale of Cubbietastrophes.”