So, in an ironic twist of wonderful positivity that was wholly unexpected in the case that we would have to pick boy name, Newbie’s name negotiations were nearly over before they began.

It was a very peaceful council. There was no need for a cease fire… no need for marriage counseling…not even the need for begging, pleading, manipulation, or bargaining.

I’m especially surprised by this because I’ve realized in the last week that I just simply don’t like boy names. They don’t excite me, and there’s a very short list that even pique my interest. So when I got a name stuck in my head Wednesday afternoon (after our sonogram) that began to grow on me, I was surprised and intrigued.

Then, Thursday morning during my bible study, I spent some time praying about what God wanted us to name our child, and immediately afterward, I had a whole name in my mind, and it was perfect.

Noah is a great biblical name that, oddly enough considering how high it is on the popularity charts, neither Chris or I personally know anyone with that name. Plus, Noah never did anything REALLY bad. I mean, he got drunk and naked in his tent and therefore caused one of his sons to be cursed from laughing at him, but that’s a WHOLE lot better than most of the guys in the bible.

And James, although it is a family name on my side, has an even deeper meaning. Our dear friend, James Price, was killed in a motorcycle accident two years ago. Chris has very much wanted to have James in his son’s name to honor his friend.

After I realized HOW perfect this name was, I immediately started hoping that God would go ahead and send an angel down to Chris, or at least make him unable to speak if he didn’t like it – you know, Zechariah-style.

Since I hadn’t heard report of an angel yet, I sent Chris a simple text: “Noah James”.

(Sometimes Angels come in the form of a text, right??)

Finally, a response. “Is that an idea? The beginning of negotiations? A game of some sort? Just wondering…”

(For this next part, I will need to remind you that Chris and I are totally over-the-top analytical geeks…although I don’t know how you could possibly forget.)

I was pretty thrilled that I got an 8 on my first naming suggestion, considering our vastly differing naming history, so decided to let him chew on the name for the rest of the day.

And, as I knew he would, he immediately set to work analyzing the name in it’s entirety…

All of this was compiled, and he prepared a full mental Thesis of Nomenclature Analysis to share with me.

Meanwhile, I was busy trying to convince Ali that this was the perfect name.

(Which was going to be a mighty hard task, seeing as how she was already quite settled on “Prince Charming” for a first and middle name, and was not planning on budging.)

“What do you think of naming Newbie Noah?” 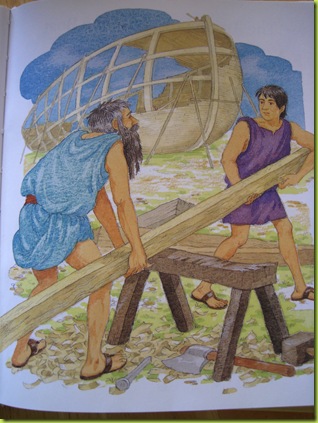 I guess Newbie WOULD look silly with a long gray beard.

So. Back to Chris’ Thesis. We discussed his fully analyzed findings at dinner Friday night, and reviewed both of our iPhone iPregnancy app picks from the top 1000 boy names, just to make sure that we weren’t missing anything.

He finally told me, “I thought about not telling you this because I was afraid it would get your hopes up too much…but when I put in that we were having a boy in my iPregnancy app, the name that the app picked from my list and defaulted to calling Newbie was, indeed, Noah.”

And so there you go. The angel spoke through his iPhone after all.

38 thoughts on “A Newbie Naming Miracle.”