For all (none) of you that have been waiting with baited breath to hear the exciting outcome of my doctor visit, my doctor did indeed have an Otoscope (thank goodness, no Torture Pappy Device needed), and said that I had a lot of pressure in my ears, but no infection. The cure he prescribed was Sudafed.

Which…oddly enough, I had started taking the night before for a minor cold that Ali had been so kind to pass on to me. The only problem was, I took it at midnight, thinking that it, like most cold medicines, would have that drowsying affect along with making my nose quit draining.

Then, as I lay in bed with my mind running completely wild and buzzing about in a million different manic directions at once, I remembered an episode of Glee…

…The one where Terri is the school nurse, and she’s trying to remember how she made it through high school so energetically so that she can help Finn…and then she remembers!! She took Sudafed! Aka PseudoEPHEDRINE.

So then she tells all of the students to take them – “They’re basically Ephedrine, except legal!” -and they’re all running around completely buzzed and getting tons of stuff accomplished with wide, drugged and crazed eyes…and of course Terri got fired.

No wonder I can’t sleep.

So if yesterday’s post seemed a bit manic and written after midnight, it was. It was written on a Sudafed Buzz.

(As is this one, since my doctor told me to take Sudafed three times a day. I’m not sure if the crazed speed I’m typing is coming across in the post, but believe me, it’s quite buzzy in my head right now.)

(But rest assured, I will NOT be taking it at midnight again.)

So, since I’m already on the completely narcissistic subject of myself and my pregnancy, several of you have asked how the nausea has been. It’s getting better, finally. I’m not sick every day, which is a welcome change, and since I’m only nauseous every two or three days, I can take Zofran effectively to treat it without The Unspoken Horrors of Side Effects being so Unspokenably Horrific.

But now that I’m progressing to the other side of the Nausea Train, I can appreciate the one and only benefit of being so sick that I could barely move for eight weeks….the hope of becoming (less) huge.

Here’s me on Sunday, 14 weeks pregnant with Newbie: 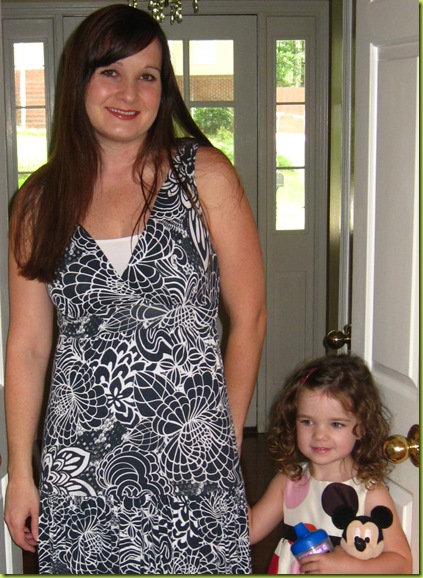 And here was me pregnant with Ali at 13 weeks: 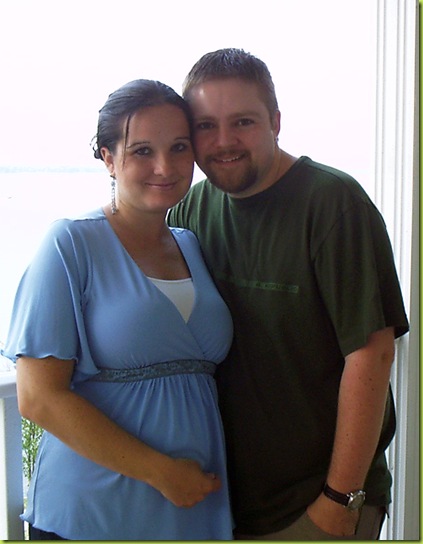 On second thought, maybe I was just entirely and ridiculously GIGANTICALLY GINORMOUSLY DINASAURICALLY MASSIVE with Ali….

Or maybe I was so excited to finally be pregnant that I was sticking out my tummy every chance I got….

Or a combination of the two.

At any rate, to continue my long and meandering update, my sonogram is two weeks from today, when we finally get to find out if it is a Newbie or a Newbette.

…and yes, that’s as far as we are on the naming thing. Of course, Chris is STILL wanting to discuss names and I am STILL refusing. So instead, we have this discussion a lot:

Him: “You know you’re just delaying the inevitable arguments by not discussing it now..”

Me: “No, by waiting until after we find out whether it’s a boy or a girl, I am effectively reducing our number of arguments by FIFTY PERCENT, and you can’t beat that rate of return!!!”

…Because that’s the kind of logic he has to put up with since chose to marry an accountant.

16 thoughts on “Random Pregnancy Updates, and Life Lessons from Glee.”