Last night, I had dinner with my LifeGroup, a group of teenage girls from church that a couple of my friends and I have called our own for the past three years. We had a great time, but afterward, I was TIRED. It had been a long day for a still-in-the-low-energy-stage pregnant woman, and I was really looking forward to lying motionless and slothlike on the couch for the remainder of the evening.

It was close to Ali’s bedtime, and when I had texted Chris to tell him I was on my way home, he told me that they were finishing up dinner.

So I did what any horrible parent exhausted person who really just wanted to lay on the couch would do….I stalled.

I filled up my car with gas….bought an Icee….popped my head into CVS to see if they had any Cami Secrets (i.e. Maternidickcamis) in their “As Seen on TV” section (which they did NOT have. Had I wanted Aqua Globes, I could have had them. Or Bump-Its. But no Cami Secrets)…

When I got home, Chris and Ali were at the VERY end of the bedtime routine.

All I had to do to make it to the couch was give Ali a kiss goodnight, change into my jammies, and I was HOME FREE.

Feeling a bit guilty about my disgustingly lazy parenting, I decided that I would get in Ali’s bed with her to give her a good hug, snuggle, and kiss goodnight.

I put all of one knee on her bed, and her bed chose that exact moment to immediately and very offendingly totally give up on life and BREAK.

One side of her mattress and bed totally caved in, and all of a sudden, Ali was laying at a 25% incline, looking at me with shock and awe.

I’ve gained all of 0.4 pounds so far!! Things should NOT (yet) be caving in from beneath me!!

So, of course, Ali had to come out of the bed, Chris had to go get all his power tools, lights had to be turned on, bedtimes had to be reversed, and my dreams of being a completely lazy bum on the couch vanished before my eyes.

Ali and I snuggled in the chair (out of more guilt) while Chris assessed the damage caused by my whale of a self.

He worked on it for a while, grumbling about Ashley Furniture having very poor construction (smart man) while I, trying to be conciliatory for breaking our life, said “at least it happened now and not in the middle of the night…”

Finally, after exploring the possibilities of fixing my horrific destruction, he decided that the best solution was to “make it work” for the night, and then come back to it when he had more time and “make it strong enough that all three of us could jump on it at once and it wouldn’t budge”.

And so, he sat her mattress down on top of the mattress in the trundle drawer underneath her bed, and rigged it up a bit so that she couldn’t fall through any holes or hit her head on any sharp corners.

Ali wasn’t too happy with me for annihilating her bed, 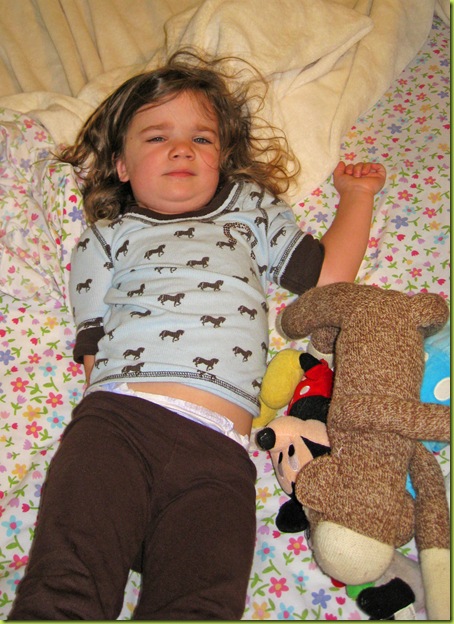 And when she woke up this morning, the first thing she said was, “Mommy, why did you break my bed last night?”

“Because Mommy is huge, honey. Because I’m giganticorically monstrous. And I’m only going to be getting huger. On a daily basis. For the next SIX months. So you might want to go ahead and put away all of your valuables so that I don’t accidentally destroy them with my enormous girth.”

18 thoughts on “A Completely Unnecessary Blow to the Pregnant Woman’s Psyche.”