There’s a new hangout in Birmingham. It is most definintely the hippest of all places to go, especially if you’re under 18 years old.

The esteemed and worshipped ascent to Yogurt Mountain.

Careful, though. It is dangerously addictive. I am afraid that my husband is hopelessly and forever strung out on the place.

When it first opened, all I could think of was the bizarre yet wildly popular YouTube video…. “Candy Mountain, Chaaaarlie!!!” 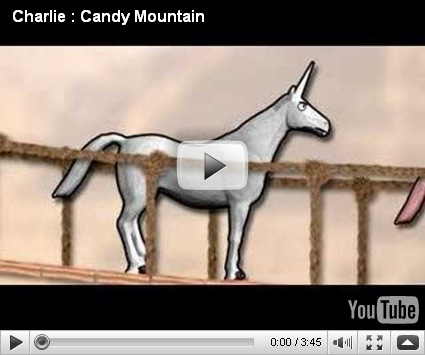 But luckily, I’ve been to Yogurt Mountain many times, and can happily say that I have yet to lose a Kidney.

If I’ve totally confused you now, Yogurt Mountain is a Frozen Yogurt establishment that has a line of gazillions of different flavors of self-serve frozen yogurt, then another line of bazillions of toppings for said yogurt. You mix and match whatever would make you the happiest, pay 45 cents an ounce for your bowl of sugary diabeticness, compare your price with your friend’s price to see who the biggest pig is, and enjoy.

Ali is also quite the fan. Especially since Chris took her on a Daddy/Daughter date for dinner there.

Now, any mention of the word “Mountain” will bring forth an onslaught of Yogurt requests…

“Where are we going today, Mommy?”

“The Botanical Gardens to see the flowers!”

Anyway, the average age of patrons at YoMo (aren’t I trendy?) is about 16.4. So every time we go in there, I feel horribly old and extraordinarily out of style.

Especially on The Night. Chris and I went to get our FroYo on at YoMo after a date one Saturday night a few months ago.

(I know – this occurred quite a while ago to be blogging about now – but I’m just recovering from the event enough to be able to express it.)

Apparently, every high school basketball game in the city had just gotten out at the same time, and every single high school spectator, cheerleader, and basketball player were crammed into the tiny rectangle known as Yogurt Mountain, or in line that stretched around the block.

There was very little room in which to inhale oxygen into one’s lungs that fateful night: 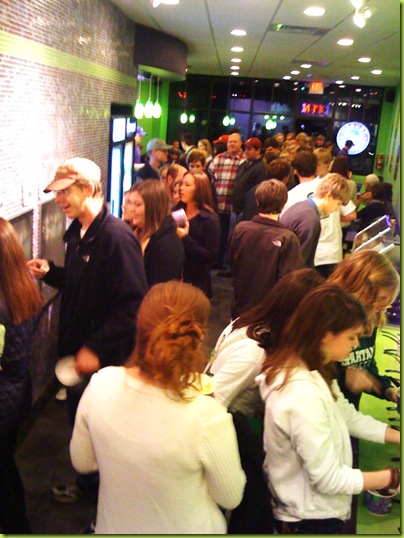 (I personally would have chosen to leave and find somewhere slightly less hip to hang out, but as I said, my husband is a YoMo Junkie, and his FroYo DT’s were starting to take over when we walked in the door and he could smell his upcoming fix.)

Anyway, as I mentioned, there were a lot of cheerleaders there from half a dozen different high schools. They were all talking amongst themselves and discussing who won what game. Most of them looked just like I remembered cheerleaders looking from decades ago when I was of that age: Pleated short skirts, ponitails, tennis shoes…

Except for one school’s cheerleaders.

They had straight skirts with slits up the sides…that were unbelievably and quite horrifically short.

So short that while standing in a normal position, they had a very obvious case of …Underbutt.

As in, there was uncovered cheekage actually peeking out of the bottom of their skirts. And, I stress, that was whilst they were in a normal standing position. Heaven help us if they bent over to, say, do a cheerleading routine or somethiing.

And all of this on a very cold night.

We saw one and hoped that she just “accidentally” hiked her skirt up a bit high, but then two more came in and our worst fears were confirmed: some adult somewhere looked through the Cheerleading Catalog and said, “No, I don’t think we’ll get ‘The Scottish’ this year. I think we’ll go with ‘The Underbutt’. That one would be an excellent look for our school.”

My first reaction was bone-freezing fear. Will Ali live in a world where underbutt is acceptable, nay, even expected???

Will she one day be writing an updated and revised version of my Mom Jeans post and say that any skirts that don’t show underbutt are Mom Skirts???!!!

I began to hyperventilate. I felt my FroYo rising in my throat. I considered boarding schools in Amish Country.

I would like to make a fashion proclamation, here and now with all of the fashion authority (none) vested in me: Underbutt is never acceptable.

From this day forward, all skirts and shorts must be checked at all angles and postures to ensure that this dreadful fashion nightmare can in no way occur, at any time.

And on the day that Underbuttless skirts become Mom Skirts, I will gladly join the ranks of Mom Clotheswearers.

And I will drag Ali with me, kicking and screaming in her Duggar-Length skirt.

18 thoughts on “Yogurt Mountain and the Dreadful Case of Underbutt.”