My family is a “from scratch” kind of family.

As I was growing up, we ate three homemade meals a day together, all made lovingly from scratch, as were any desserts that were ever made.

(At least that’s how I remember it – albeit potentially a bit idealistic-childhood-memory-esque.)

And my Mom wasn’t the only cook in the house – my Dad still makes biscuits from scratch, even to the point that you must mix a stick of butter in with a fork instead of a blender to make biscuits like him. He is already teaching Ali these skills, and one of her favorite treats is to make biscuits with Pop. 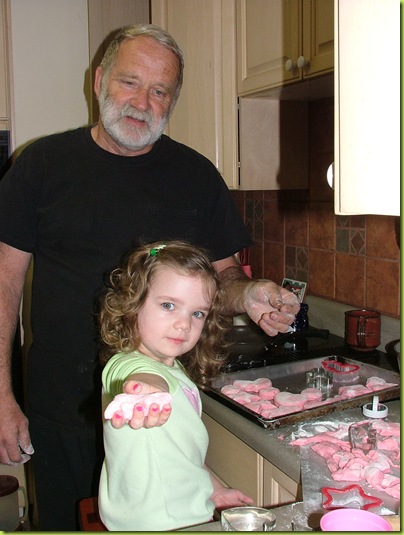 I was brought up to cook well, and to not cook out of a box.

However, a year or two after Chris and I got married, I was running late on making him a birthday cake, and in a hurried and frantic decision, I made him a cake…from a box.

I was ashamed of my methods. Horribly ashamed.

However, for whatever reason, he absolutely fell in love with it. He proclaimed it the best dessert I’d ever made (trumping all of those homemade cakes, cookies, and brownies that I’d slaved over), and thenceforth begged to have it any time I was making a dessert, especially for his birthday.

It was a pretty good cake, I must admit. So good that I even made it for work functions once or twice. However, I had several scratch-and-only-scratch co-workers, so when they oohed and aahed over my cake and begged me for the recipe, I coyly implied that it was my secret recipe.

Because I was ashamed.

The cake became a family tradition, even used in welcoming Ali into the world. On the day of our 20-week gender-determining ultrasound, we invited both of our families over to see the video. I had separated the Cream Cheese icing (out of the can) into two parts and colored it to make this cake: 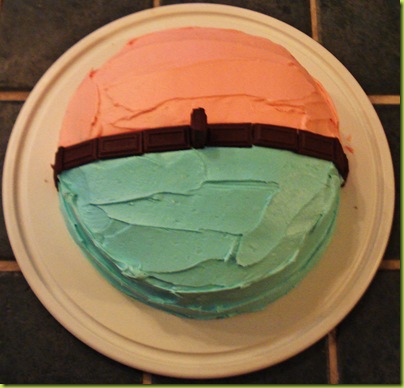 We made everyone commit to their prediction by choosing a slice of cake before watching the video.

(My little brother was the only one who thought to hedge his bet, and chose a piece that was half pink and half blue, and with the extra benefit of Hershey’s mini chocolate bars. Smart, he is.)

Obviously, The Cake has made it’s mark on our family. Besides it’s sentimental value, The Cake has also excused a decline in my cooking sensibilities: I now make boxed brownies instead of Scratch Brownies, and get Toll House Chocolate Chip Cookie Dough when making my favorite kind of cookies instead of making my own dough, on both counts arguing that it tastes just as good with a quarter of the work.

I even buy Frozen Veggies, packed ready in steamable bags.

However, like everything that Chris and I love, The Cake met with The Curse.

(You know, The Curse that has captured and bankrupted every restaurant or place that has ever held any sentimental value in our relationship, most notably the location of our Wedding Rehearsal Dinner that was held nine years ago tonight – Our beloved and ever-classy Sarris Steakhouse, which was replaced by the oh-so-not-even-on-the-radar-of-classy Nanci’s Love Stuff. Yes, we ate Filet Mignon in anticipation of our wedding in the room that now houses Thigh-High Red Vinyl Boots, Little Bo Peep Outfits, and Fireman uniforms.)

Back to The Cake. The Butter Pecan cake mix disappeared from grocery stores everywhere – I could occasionally find one at Target, but other than that, no one carried it.

And the Sour Cream Chocolate Icing, which I felt was the real key to the cake’s unique flavor, went completely extinct. It could be found nowhere.

Chris still requests The Cake every now and then, and I search and search for the ingredients, but to no avail.

So I’ve decided to finally admit that the cake as it was is no more and move on. Tomorrow is our anniversary, and I wanted to make Chris something special.

So…I substituted the Butter Pecan cake mix for a Spice Cake mix, and got regular Chocolate icing instead of Sour Cream Icing. And, to help it’s integrity a bit, I actually went back to my scratch roots made homemade Cream Cheese Icing.

Here’s to hoping that he falls in love with it all over again.

Happy Anniversary, Baby – may our tenth year of marriage be full of deliciousness. 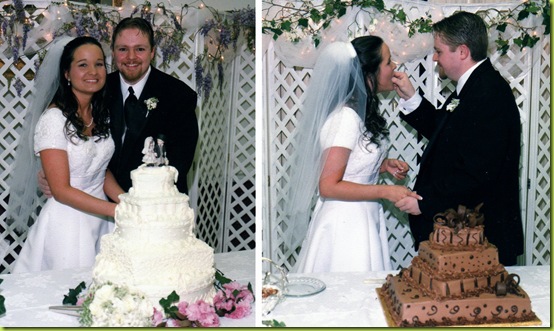 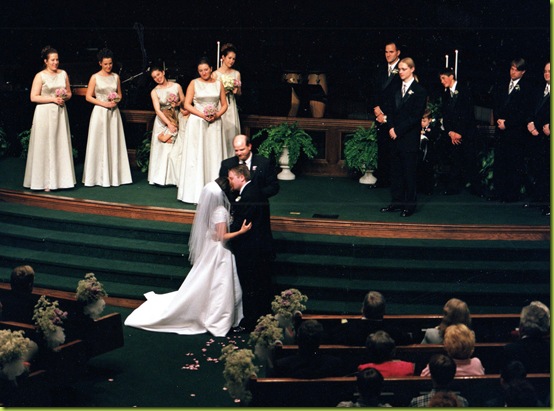 33 thoughts on “In Sickness and in Health, by Scratch or by Box…”