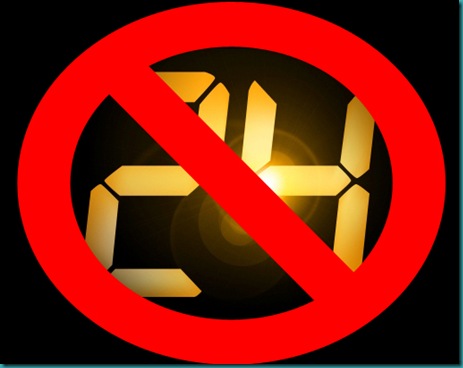 I used to love it…

But after two seasons, I realized that it stressed me out so much that I might need medication if I watched another episode. Just hearing the mere “beep, BEEP, beep, BEEP” of the intro and before and after every stinkin’ commercial break literally makes my heart race with anxiety and dread of WHAT’S GOING TO GO WRONG NEXT.

(Actually, just THINKING the “beep, BEEP, beep, BEEP” makes my heart race. I’m telling you – the continued existence of this show is not good for my mental well-being.)

But, Chris still loves it. And I don’t want to miss out on our night times alone. So, when the dreaded time slot arrives, I sit in the living room, feet entwined with his, but eyes and ears two inches from my laptop, trying my DARNDEST to tune out the carnage happening on his Male Soap Opera.

And so, I present my case.

Face it – It’s not going to happen. Jack will never get a full night’s sleep, will never get to pee, and will NEVER be happy or well-adjusted. And Chloe will never quit smelling loathsome and offensive odors.