The weather was freeze-your-eyeballs cold* on Saturday. It was even supposed to do something that NEVER happens in December in Alabama or Georgia: It was actually supposed to snow.

*this means about 40 degrees in the South, by the way. I know that you northerners manage to keep your eyeballs thawed at MUCH lower temperatures, but it is a scientific fact that the freezing point for eyeballs is much higher the further South that you go.

It actually did snow a little back home in Alabama (sad that we missed it), but no snow in Atlanta. It might as well have, though – it sure felt like it.

If you’re wondering why I had such a good attitude about going to the game, it’s because it was….indoors. (Can you hear the angels singing a song of Hallelujahs? I sure did.)

When we headed out to the game, you know that I couldn’t help doing a bit of “fashion” watch for you.

This girl’s skirt was…barely in existence: 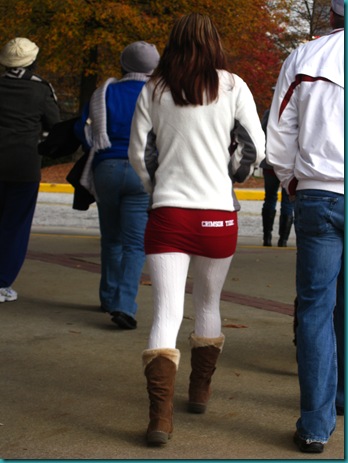 Just a WEE bit short – that’s all. But if you take a bit of shortness and add a pinch of rearview message, you end up with a recipe for priceless.

When I saw this next guy, I had never been so glad that my husband’s minimum temperature for wearing shorts was 40 degrees, because I would NOT like him to feel the need to wear geezer socks (with high-top tennishoes, no less!) simply to hold fast to his principles regarding short wearage: 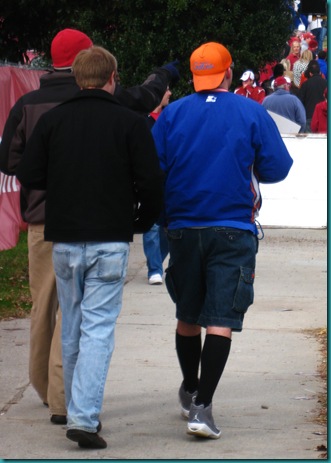 Chris told me that we had lucked into having Club Level seats, something that we were both very excited about after being at the VERY top row of the stadium on our last trip to Atlanta.

We got up there, showed our tickets, and they let us into the most amazing VIP-lounge-in-a-football-stadium ever: 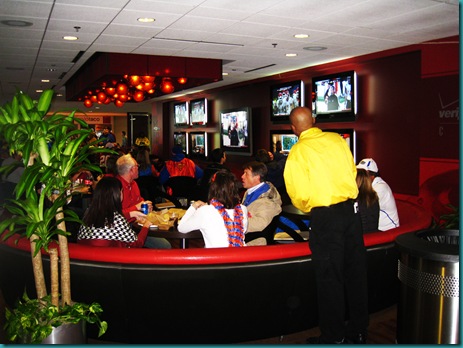 The bathrooms were not all cement, floods, and decorated with dirty wads of toilet paper like all other football stadium bathrooms I’ve ever been to – they were marble, had a seemingly-full-time bathroom-maintenance lady on hand, and even had flat screen televisions!! 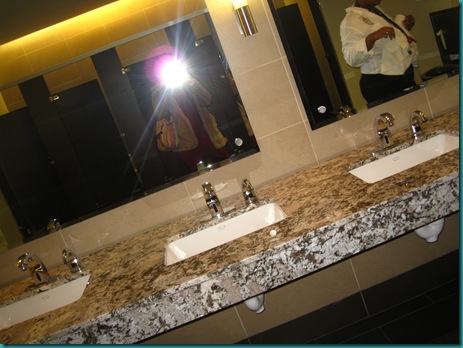 (I’m sure the maintenance lady doubted my accustomedness to such fineries when I took a picture of the bathroom.)

Oh – and the food was amazing: 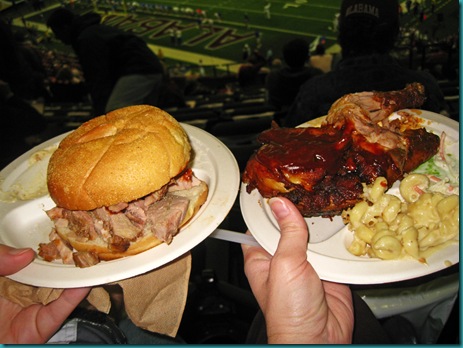 BUT right after ordering our food and then trying to figure out how in the world to get to our seats, we found out that we were NOT, after all, “in” The Club, and were politely pointed towards our non-clubby hallway.

Oops. It was nice while it lasted.

The game began with both bands performing the National Anthem – a beautiful sight:

And then… I changed.

Normally, I would spend th 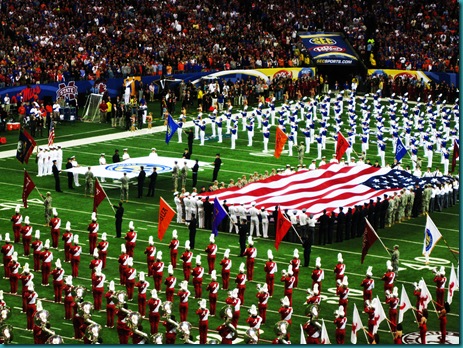 e rest of the post talking about fashion faux pas that I saw during the game, and observations about Florida’s band marching in the formation of fallopian tubes and ovaries and the fact that it looked like their flag girls were wearing thongs…but…it all faded away.

Because….as unbelievable as this sounds…

I actually engaged with the football game.

I couldn’t believe it – it was as if my football drive suddenly returned.

I was standing up, cheering, and watching every play with excitement and anticipation….

I was a football fan again – something that I haven’t been in three years.

And it felt good.

Maybe it was because it’s been three years since I’ve been to a game where everything went right for our team…maybe it was the excitement in the stadium…or maybe my football drive is back for good, just in time for the season to be over.

But I know one thing: it makes for a happy hubby to have an excited-about-football wife.

Then again, maybe he was just happy about the game.

I’m going to pretend it was me.

Anyway, here are a few pictures I got of the ACTUAL football game. (Weird, huh? It’s okay – I’m not used to this interested-in-football-me either.)

At the fourth quarter beginning: 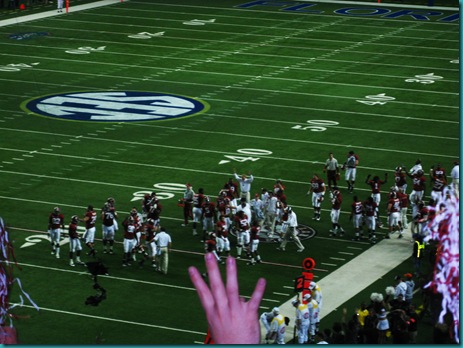 The end, with all of the confetti everywhere: 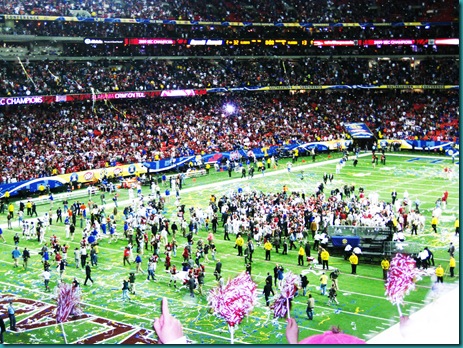 Chris’ Aunt and Uncle after the game: 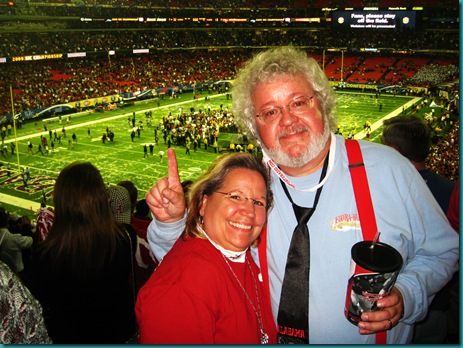 Chris and his new excited-about-football wife: 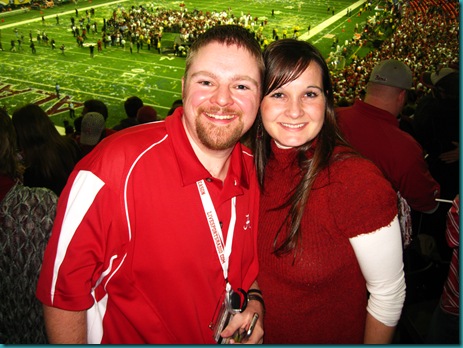 And all six of us: 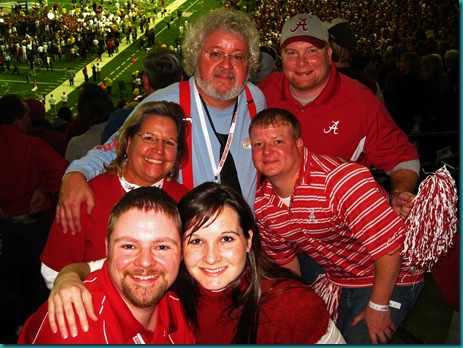 The stark difference in the Florida and Alabama sides of the stadium: 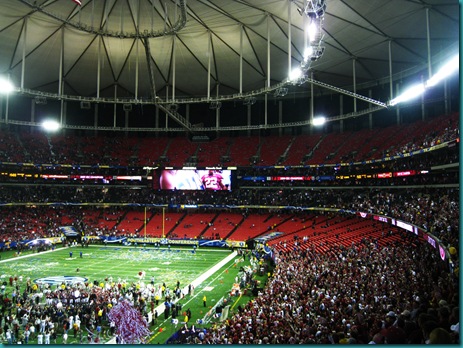 And the cheerleaders making snow angels in the confetti: 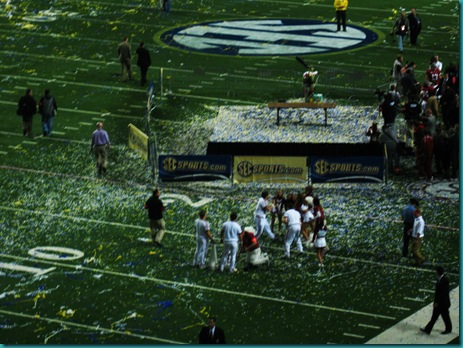 After all of that excitement, we went and had a nice quiet dinner at Copeland’s (I know – you would think Chris would have wanted to go do more belly-dancing after that victory), where we all engaged in deep conversations: 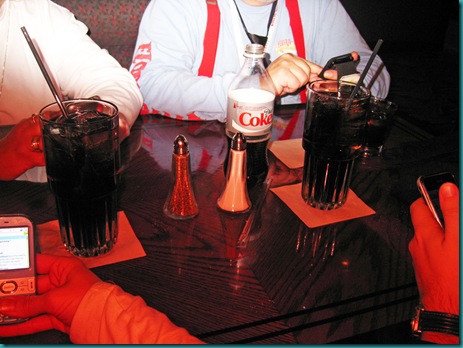 …or maybe we just all caught up on our social media.

At least I’m not the only addict of the family.

14 thoughts on “My Journey Over to the Crimson Side.”