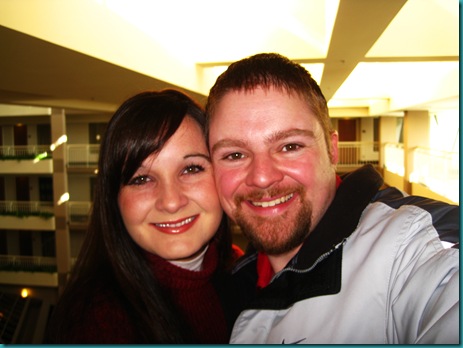 Chris and I started out our Saturday morning leading up to The Big Game eating breakfast in the lobby of our hotel, the Embassy Suites.

(We were at the Embassy Suites because the Hyatt Place was a horrible hotel and canceled our reservations along with 26 other people’s after they were already confirmed AND paid for because they had a wishy-washy group that wanted to extend their stay, and so Expedia made up for Hyatt’s missing integrity and paid for the difference for us to stay at the Embassy Suites, even though it was obviously Hyatt’s fault. The moral of this parenthetical story is: Use Expedia and DON’T book with Hyatt.)

(Unless you want a room at the Embassy Suites. Because that WAS nice.)

It was a lovely atrium hotel – the type that echoes crazily in it’s 16 floor openness.

At breakfast, it was all Florida fans but us. It was a nice quiet breakfast – no raucousness or jeering of fans. After all – it’s the Embassy Suites – even fans act classy in places like that.

We headed back up to our floor – the fourth – after breakfast, and as we walked along the balcony looking down at the sea of Florida fans still enjoying their sophisticated and quiet breakfast, Chris told me, “Go ahead and keep walking. You don’t want to be around when I do what I’m about to do.”

So I walked on ahead, and in my mind I was thoroughly convinced from my knowledge of my husband that he was about to pass gas.

(Come on, wouldn’t all wives think that when their husband gave those instructions?)

I WAS wondering why he couldn’t wait 50 feet until we were in the privacy of our room, but whatever.

I walked on ahead without looking back, and then all of a sudden, I hear a bellowing sound that temporarily paralyzed me.

Chris’ loudest, most booming, yet playful voice that he’d ever managed to bring forth from his lungs bellowing down to the breakfasters, “ROOOOOOLLLLL

Did that seriously just happen? At the EMBASSY SUITES?!?!!?”

I walked as fast as I could past our room – anywhere just to further distance myself.

There’s an immediate murmur from the floors beneath us, all looking up, trying to locate the foghorn-voiced Alabama fan.

Chris hurried into our room laughing all the way, just in time for me to hear a female Florida fan say, “I think he ran that way.”

Needless to say, I deadbolted our door.

And, after I recovered from my near heart attack, I MIGHT have had a little giggle with him.

The funny thing is, he would have never done that if he thought we were going to win – it was, I believe, his effort to “support his team in spite of the fact that they were going to lose.”

Luckily for me (and all of the Florida fans in our hotel), he’s always the poster-child of a polite, complimentary, and even sincere condolence-giving fan after a win.

But, STILL before the game, we went over to the mall – quite a huge mall at that – and as we were going up the escalator in Bloomingdales, looking down three floors beneath us at a sea of people dressed for the game, I saw another glint in his eye.

“We are PAYING the Embassy Suites for you to have the right to do that. We are NOT paying Bloomingdale’s. This is MY part of the day and I want to shop in non-humiliated peace.”

Later on, he said he wanted to go to the Apple store, and I wanted to go to Macy’s, so we split up. I can’t help but wonder if he took another ride on that Bloomingdale’s escalator…

More on the game soon!

11 thoughts on “For Better or Worse, In Football and in Health…”