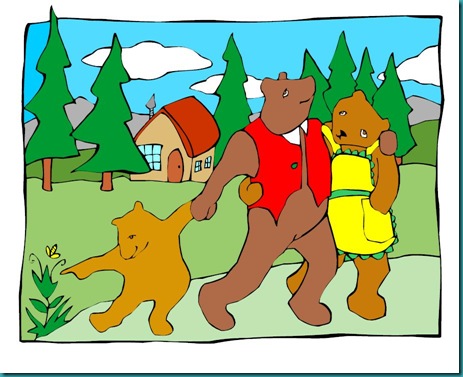 Everything in Ali’s life is currently being related back to The Three Bears.

All soup-like substances, including chili, must be referred to as “porridge” if one is desirous for Ali to partake of it, and every bite must be analyzed to determine whether it is too hot, too cold, or just right.

The song on her bible CD that says “Behold, Behold, I stand at the door and knock, knock, knock…” is, according to Ali (who happens to sing it “Hehold, Hehold…”), apparently about Goldilocks knocking on The Three Bears’ door.

(I don’t remember her knocking…I thought Goldilocks was more of a breaking and entering sort of porridge thief.)

And the grand finale of this association obsession happened on Sunday when she pooped on the potty. She announced to Chris, the parent in charge of that particular potty visit, “I pooped!!!” Then, looking down into the potty and checking out the situation, she informed him: “There’s a big HUUUGE poop, and a medium poop, and an iiiiitty biiiitty baby bear poop.”

Chris looked, and sure enough, that summed up the situation quite well.

Anyway…EVERYTHING in life has to do with these crazy bears. And really, this makes total sense. She can relate to their family unit – There’s a Daddy, a Mommy, and a baby.

Upon deeper thought into this matter, I realized that there’s a children’s story for every family unit –

Anyway, you get my point.

So, obviously, it would be a complete SHAME to mess up this understanding of family that she has, right?

After telling me yesterday morning after gymnastics that she wanted a baby sister, she decided that this: 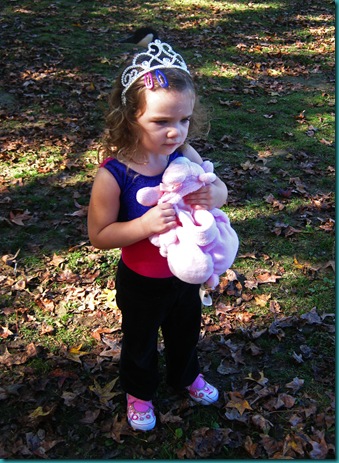 Was her Baby Bear Sister, Abby.

I’m sure that Goldilocks will be thrilled to know that there’s a new bear on the scene, waiting to have her porridge eaten, her chair broken, their bed slept in, and her life wrecked in general.

11 thoughts on “Life Through The Lens of Goldilocks”