We have a way of having quirky and unique creature invasions no matter where we go. At our old house, it was Satan the Squirrel. Thank goodness he hasn’t found us again (yet). But for the last three years at our new house, we have had a much less damaging, but much more puzzling group of visitors. 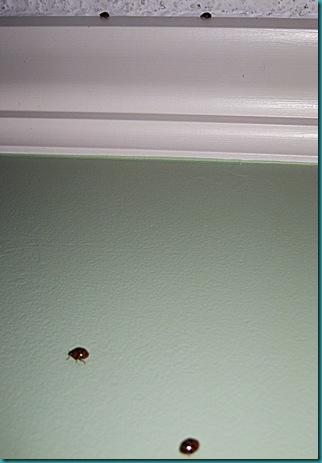 Can a swarm of hundreds ladybugs know to come to the SAME room in the SAME house every year, and all show up at once?

Furthermore, how is it that they know to come to a room decorated in Ladybugs (and Butterflies and Dragonflies)?

Furthermore, how can they do all of the above when I know for a fact that this year’s swarm is a totally different group than the previous two year’s swarms, because they all met their demise in the bottom of a water bottle?

Furthermore, and most puzzling, how can ladybugs understand the passage of time well enough to come:

They arrived the EXACT SAME DAY that they came last year.

I’m pretty sure that Ladybugs must be the smartest bugs on earth.

Either that, or we live in the Ladybug Twilight Zone.

a) That last year’s invaders laid eggs and these are their babies that miraculously hatched exactly a year later (I disproved because they’re all full-grown, and I’ve seen baby ladybugs – their tiny.)

b) That each year, the ladybugs “mark” our house so that they (and their descendants) know where to come back to for their winter death lodging. This theory actually seems feasible.

Which means that Ali’s room is apparently marked with Ladybug poo.

Anyone have any better theories?

Too bad the ladybugs won’t live to explain it to us.

Time to get the water bottle torture chamber back out… 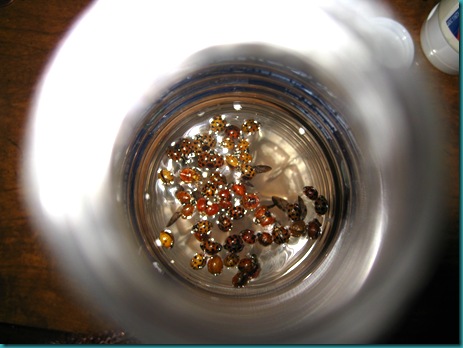